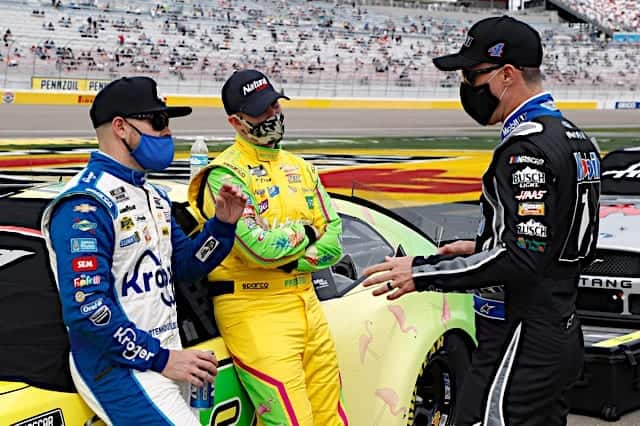 It’s September, which is usually a busy time for NASCAR’s silly season. It seems like every week, a little piece of the 2022 puzzle is resolved and this week it was JTG Daugherty Racing’s turn.

Former NBA player and JTG Daugherty Racing co-owner Brad Daugherty was on a Zoom press conference with NBC Sports this week and said his organization will scale back to a single-car operation for the 2022 season.

The organization has been a two-car team since the 2017 season, but lost its second charter to Spire Motorsports prior to the 2021 season. JTG has run the No. 37 car of Ryan Preece as an open team for the entire season.

That leaves the team with two drivers for one car and a decision must be made on who the organization will choose to drive its car in 2022: Preece or Ricky Stenhouse Jr.? Joy Tomlinson and Clayton Caldwell debate who would be the better option.

Ricky Stenhouse Jr. is the Answer

Stenhouse should be retained to drive for JTG Daugherty Racing next season because he’s performed pretty well this year.

He started off the season with nine consecutive top-20 finishes, including a runner-up at the Bristol Motor Speedway dirt track. He also was 12th in the Coca-Cola 600 at Charlotte Motor Speedway after nearly qualifying on the pole and took home an impressive sixth place at Nashville Superspeedway two weeks later. Though he’s only earned two top 10s so far in 2021, he has 13 top 15s and 19 top-20 results, giving him an average finish of 18.6 — his lowest since 2017.

NBC Sports’ David Smith took a deeper look into the organization’s statistics in June, highlighting Stenhouse’s performance above other drivers running around the same position of 16th-20th place.

More recently, Stenhouse spoke with Frontstretch last week about his season and how his team has become more consistent than last year.

“I feel like I’ve put the car in better positions throughout the race, which has definitely been beneficial,” Stenhouse said. “We haven’t tried too many tricks in our racecars. We’ve been trying to be really consistent with that, just making sure that we just put the best possible racecar on the racetrack, and so it’s definitely paid off.”

The only thing really wrong — besides not clearing a driver once in a great while — is his equipment; his engine expired at Sonoma Raceway and in the second race at Pocono Raceway. Then at Atlanta Motor Speedway in July, Cody Ware got loose underneath him while racing four wide, setting off a chain reaction with both Stenhouse and Daniel Suarez.

At Kansas Speedway in May, he was caught up in an accident through no fault of his own when Christopher Bell spun around. The No. 47 had nowhere to go and suffered severe damage to the front end. Bell then spun back across the track and tagged the No. 37, causing Preece to run into the wall.

Besides this year, Stenhouse has had success in prior seasons: in 2017 he snagged two wins, four top fives and nine top 10s competing for Roush Fenway Racing. Although it was the first and only playoff berth of his Cup career, he still earned 19 total top fives and 40 top-10 finishes.

The Olive Branch, Miss. native has two NASCAR Xfinity Series championships to his resume, capturing the title in 2011 and 2012. He also earned eight wins, 35 top fives and 52 top 10s in those years combined.

Stenhouse knows what it takes to win in Cup and is still young enough to continue on a few more years. I know Preece also won his first race in the Truck Series this year, but I believe JTG needs someone with more experience in the Cup Series.

Besides, he could get some additional sponsorship for the team if it needs it. Plus, the Next Gen car is coming out in 2022; Stenhouse has been through more NASCAR generation changes than Preece and could adjust more quickly.

If he can keep the tricks off the racetrack and continue the consistent runs like he’s done so far this year, then he should stay with JTG and continue the relationship. Two years is not a very long time to gel and I think if he runs for JTG next year, he could possibly bring the team back to victory lane. — Joy Tomlinson

While JTG Daugherty Racing announced it will be a solo-car operation in 2022, everyone immediately thinks that Preece will be out of a ride.

I get it. Preece’s tenure with the organization hasn’t been great. But he hasn’t had any stability either, which has hurt his performance. If you compare him to his teammate, Stenhouse, the argument between the two seems to be a bit more fair.

Looking at Stenhouse’s Cup career, he has struggled a bit more than you think and you have to wonder if his ceiling is lower than Preece’s. Stenhouse has made 318 starts in his career, 255 of which came at Roush Fenway Racing, a team that is a step above where he currently is at JTG Daugherty Racing.

In those 255 starts, Stenhouse had two Cup victories, both of them coming at superspeedways, Daytona International Speedway and Talladega Superspeedway in the 2017 season. He’s finished in the top 20 in points just twice in eight full-time seasons. It’s possible his ceiling has been reached in the Cup Series.

For long-term success, Preece would be the better hire. Preece has proven that when the equipment has been there, he can race and be competitive. With the new car coming next year, the back end of the field will be able to close the gap a bit more on the bigger teams. Drivers are going to mean more than ever. Having a talented driver could make a huge difference.

Preece really hasn’t gotten a fair shake at JTG Daugherty the three years he’s been there. In his first year, he drove the No. 47 car but had a crew chief that didn’t have a great resume and struggled with previous drivers in that car. After one year in the No. 47, Preece moved to the No. 37 car and the pandemic hit, an extremely difficult situation for a driver in their first year in a new car. Even entering this year, there was a change.

The No. 37 team lost its charter in between the 2020 and 2021 seasons. It was a rough offseason and you have to wonder just how much effort the organization has put into a team that doesn’t bring in a whole lot of money as an open team. They had sponsorship signed for the No. 37 car and had to run out the season to keep their commitments to their partners. For Preece to be as competitive as he has been in this car all season long is pretty impressive.

Plus, his track record in other NASCAR divisions is very impressive. He has 59 Xfinity Series starts in his career, 36 of them coming for a second-tier team. In the other 23, he has two wins. Comparing that to a lot of the other drivers in the series, that’s pretty good.

Plus, who could forget his extremely impressive win in the NASCAR Camping World Truck Series in June? He won in his first start in the division at Nashville back in June. It was just David Gilliland Racing’s second win in the series.

His most impressive stats come from the Whelen Modified Tour, a very competitive open wheel division that races on short tracks. Preece began racing in that series at the age of 16 in 2007 and won the championship for that division in 2014 and has finished second in points in that series four times. He has 24 career wins in a modified. This proves he has the raw talent needed to succeed in NASCAR and if given the right opportunity he can win.

I think his best Cup Series days are ahead of him. While it may seem like we’ve heard about Preece forever, he is still only 30 years old, very young for a Cup driver even in this day and age.

In the end, I think given the right opportunity and some stability, Preece will shine. If the 2022 season factors in the driver’s talent more and levels the playing the field for teams in the backend of the field, it could be a huge advantage having Preece as the driver. Next year is his time to shine. — Clayton Caldwell

Who’s driving the JTG 2022 test car at the Daytona test? Plus Tad already said in an interview they were going to help Ryan find a ride.

I thi9nk that the belief that the new car will give the backmarker teams a better chance is delusional. Perhaps for a couple of races, but then engineering resources and manufacturer support will redress the balance.

Preece is looking for a ride, anywhere. Guess that settles that.

Neither. Stenhouse is called Wrecky Spinhouse by other drivers for good reason. Damaged equipment carries a cost too high for a team like JTG. Preece is good, but not great. A step up in terms of performance would be to hire Matty D. Although he has yet to ring the victory bell, he’s in the hunt nearly every week. He outperformed his equipment at Leavine and would likely seal the deal with another year with Hassler as CC at the Wood Brothers. He’s got far more upside potential than either Stenhouse or Preece.

There are more than a few Wrecky Spinhouses on the track during each event just to bring out cautions when needed. But he does seem to have a Hamlin mentality.

I still think “Wrecky Spinhouse” and chuckle every time I see his name.

I think it’s an appropriate nickname but since he usually takes out a bunch of cars it loses some of its humour.