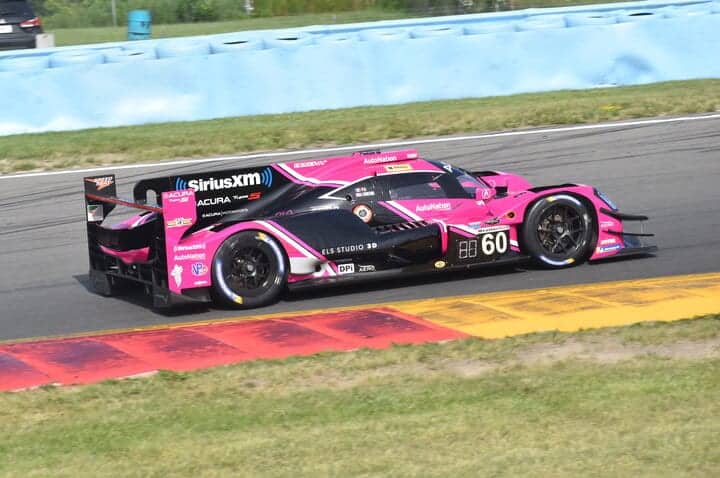 Meyer Shank Racing with Curb-Agajanian swept the two IMSA WeatherTech SportsCar Championship practice sessions for the Sahlen’s Six Hours at the Glen.  Dane Cameron’s lap at 135.322 mph Saturday morning (June 26) is the fastest lap of the weekend to this point.

Friday’s practice session was originally scheduled for 60 minutes.  However, a last-minute decision saw an extra 30 minutes tacked on for amateur drivers.

Meyer Shank Racing with Curb-Agajanian’s Olivier Pla ended up fastest with a lap at 134.423 mph in his Acura ARX-05.  That came despite the Cadillacs topping the charts for the vast majority of the session.

WIN Autosport’s Tristan Nunez was fastest in LMP2 with a lap at 130.440 mph, good for eighth overall.  Nunez was only four-hundredths of a second faster than Tower Motorsport by Starworks’ John Farano.  PR1 Mathiasen Motorsports’ Scott Huffaker was third.

Era Motorsports’ Kyle Tilley was fourth in class, but came away from the session a little upset.  Early on, Tilley was hit by Action Express Racing’s Simon Pagenaud and spun in turn 1 to bring out the session’s first red flag.  Luckily, the damage was minimal and Tilley was able to get back out there.

In GT Le Mans, we learned that the Porsche 911 RSR-19 does not like to go off-road.  Shortly after the session restarted following Tilley’s spin, WeatherTech Racing’s Matt Campbell had a moment in the Inner Loop.  Campbell’s Porsche went off in the second part of the Loop and bounded over an access road, briefly catching some air.

When the Porsche 911 RSR-19 landed, the car’s right rear suspension was damaged and debris was thrown on-track.  The debris led to the second and final red flag of the session.  Campbell’s car had to go back to the paddock for 20 minutes of repairs before returning to the track.

The BMW M8 GTEs were quick early on during the session, but by the time the 90-minute session was complete, it was Corvette Racing at the top of the board.  Nick Tandy was fastest with a lap at 119.395 mph, good for 17th overall.  His lap was one-sixth of a second faster than teammate Antonio Garcia.  BMW Team RLL’s Jesse Krohn was third with his teammate Philipp Eng in fourth.  Campbell ended up fifth in his Porsche, but quite a ways back from the rest of the class.

Vasser Sullivan’s Jack Hawksworth was fastest in GT Daytona with a lap at 114.743 mph, good for 24th overall.  Hawksworth’s lap was nearly two-tenths of a second faster than the Porsche of Wright Motorsports’ Patrick Long.  NTe Sport’s Jaden Conwright, who is making his IMSA WeatherTech SportsCar Championship debut this weekend, was a surprising third quickest in his Audi, followed by Zach Veach in the second Lexus, back after missing Detroit due to COVID-19 issues.  Paul Miller Racing’s Bryan Sellers was fifth quickest in his Lamborghini.

Saturday morning was just not a very good time for WIN Autosport’s Steven Thomas.  At the very beginning of the session, Thomas spun under braking for turn 8 and nosed into the wall before clipping PFAFF Motorsports’ Zacharie Robichon.  Both cars were able to get back to the pits on their own, but were damaged.  The crash quickly brought out the red flag.

Later on, Thomas spun again exiting turn 1 and tapped the inside wall.  This second incident did not bring out a yellow, but did cost the team a lot of practice time.

During the Pro-only portion of the session, the big numbers came.  Action Express Racing’s Kamui Kobayashi was first to stake his claim to the top of the charts, then Ricky Taylor did.  Cameron put him on top of the chart with eight minutes to go, then bettered his time until he set the fastest lap of the day.

Fraga was fastest in LMP3 with a lap at 122.447 mph, good for 13th overall.  Fraga’s lap was three-quarters of a second faster than Askew, while United Autosports’ Austin McCusker was third.  Jeroen Bleekemolen was fourth, while Braun was fifth.

GT Le Mans saw no on-track issues during the session.  BMW Team RLL’s Connor de Phillippi was fastest with a lap at 120.027 mph, good for 17th overall.  De Phillippi was one-eighth of a second faster than Garcia.  John Edwards was third in the second BMW, followed by Tommy Milner and Campbell.

Finally, Kyle Kirkwood was fastest in GT Daytona in the No. 14 Lexus.  Kirkwood’s lap at 116.398 mph was nearly three-quarters of a second faster than Turner Motorsport’s Robby Foley.  Wright Motorsports’ Trent Hindman was third, then the Mercedes of Alegra Motorsports’ Daniel Morad.  Vasser Sullivan’s Frankie Montecalvo was fifth.

Qualifying for the Sahlen’s Six Hours at the Glen is scheduled for 11:50 a.m. Saturday.  The session will be streamed live for free at IMSA.com.  In addition, subscribers to NBC Sports’ TrackPass will also have a live stream available.