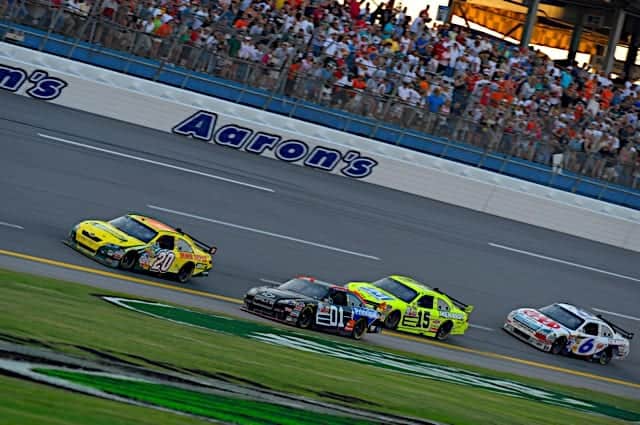 Several key headlines emerged from last Sunday’s (June 6) Toyota/Save Mart 350 from Sonoma Raceway, including Kyle Larson’s dominating win and the 270th team win for Hendrick Motorsports. But one driver seemingly bound to make a major headline for himself on Sunday was NASCAR Cup Series rookie Anthony Alfredo, who raced inside the top-10 for a chunk of the race before getting spun out during a late-race restart.

Alfredo’s 31st-place finish was no indication of how well the first-year driver was running beforehand. Unfortunately, his incident is another example of other rookie drivers who had excellent runs slip from their grasps, due to extenuating circumstances or otherwise.

After Kyle Petty suffered a broken leg at Talladega Superspeedway a few weeks prior, the No. 42 Mello Yello team needed a fill-in driver for the upcoming Banquet Frozen Foods 300 at Sonoma. The guy they relied on was a young road racing hotshot by the name of Tommy Kendall.

See also
Did You Notice?: Reimagining A NASCAR Winston Million

Kendall, who competed in only six prior Cup events, made sure to use an extensive background in the Trans-Am Series to his advantage. He started his weekend strong by qualifying fifth. He stayed in the top 10 for most of the day, eventually getting up to the lead and holding it for 12 laps. But on the final restart, he faced pressure from Mark Martin. With two laps to go, the two drivers made contact in turn 7, resulting in Martin spinning into the tire barrier and a flat left front tire for Kendall. Ricky Rudd and Davey Allison passed Kendall’s limping machine to engage in their own controversial battle for the win.

Instead of celebrating his first win, Kendall finished a frustrating, if respectable, 18th. He made only seven more Cup starts since his debut, largely focusing on his successful Trans-Am career instead, where he won four championships. But missing out on his first NASCAR win in 1991 will forever be a missed opportunity.

In 2004, Kasey Kahne had one of the most electric rookie seasons in Cup history. Problem is, it’s likely the unluckiest ever rookie season as well. He came painfully close to scoring his first win several times that year, but the one loss that sticks out the most is the MBNA 400 at Dover International Speedway.

After sneaking through the “Big One” on lap 346 that collected more than 15 cars, Kahne found himself in the race lead, keeping Mark Martin and Tony Stewart at bay for the next 36 circuits. Then, with 19 laps to go, it came to a crashing end. He ran into an oil path left by the damaged car of Casey Mears and went spinning into the turn 3 wall, destroying his fast Evernham Motorsports Dodge.

A dejected Kahne climbed out of the car, his first win slipping away once again. He easily captured the 2004 Rookie of the Year award with a 13th-place points finish and finally notched his maiden win with a Richmond Raceway triumph in 2005. But the number of close losses he had that year, including Dover, is a painful reminder of what could’ve been.

Reed Sorenson was a phenom in the NASCAR Xfinity Series in 2005, scoring two wins and a fourth-place points finish. In 2006, the 20-year-old was promoted up to Cup to drive Chip Ganassi’s No. 41 Dodge. Just like most rookies, there were many growing pains that he had to endure along the way. He did score five top 10s, but most of his other results weren’t much to brag about.

Then came the Sony HD 500 at the two-mile Auto Club Speedway. Sorenson qualified way back in 34th, but emerged as a contender for at least a top-15 finish. A 55-lap green flag run ended up concluding the race, with many teams and drivers uncertain if they could make the distance on fuel. A number of them decided the risk was too much and pitted, but the No. 41 team chose to gamble and stretch out their fuel mileage as much as they could.

Sorenson took the lead with 10 laps to go, increasingly ginger on the gas pedal as the laps clicked away. Then, with a lap and a half to go, Sorenson’s fuel tank ultimately ran dry. He painfully watched eventual race winner Kahne make the winning pass on him before the No. 41 Dodge rolled down pit road. Sorenson disappointingly finished one lap down in 21st, his closest chance of tasting victory lane in Cup. As of June 2021, he does not have a ride in any NASCAR division.

Before the 2008 AMP Energy 500 at Talladega Superspeedway, Regan Smith was just another ambitious driver hoping to get the right break he needed in order to be a NASCAR star. He impressed in select Xfinity starts in 2007 for Ginn Racing, including winning a pole at Kentucky Speedway, before taking the step up to Cup in 2008 with Dale Earnhardt, Inc.

Smith qualified fourth for the series’ second visit to Talladega that October, but had the mindset of just making it to the end and staying in contention for a good finish. He played it wisely, indeed, as he avoided two big crashes and found himself running in second behind leader Stewart with six laps to go. Coming to the checkered flag with teammate Paul Menard pushing him, Smith made his move to the inside of Stewart, but was met with a block, forcing Smith’s No. 01 Chevrolet below the yellow line. Smith crossed the line first, but NASCAR awarded Stewart the win in a decision that still doesn’t sit well with some fans to this day.

Smith, the eventual 2008 Rookie of the Year, had to wait until the 2011 Southern 500 at Darlington Raceway to get his first and only Cup win. But he, and many fans who had his back, will have to live on with the haunting circumstances of that October afternoon at Talladega.

William Byron’s 2016 rookie season in the Camping World Truck Series was an absolute dream. He won at Kansas Speedway in just his fifth series start and took home six more trophies as the year progressed, breaking all the rookie records set before him.

As the Truck Series headed to Phoenix Raceway for the penultimate race of the season, Byron wasn’t locked into the championship round, but still had a comfortable gap over the cutoff line. Should he not have made any mistakes and brought home a good finish, Byron was destined to contend for a championship. He did what he had done plenty of times before, leading a dominant 112 laps in the race.

But while out front with just nine laps to go, the engine on Byron’s No. 9 Toyota unexpectedly began to cough. Despite all hopes of the problem not being terminal, it blew out on Byron, ending his night and any chances he had of becoming a rookie champion in Trucks. To make things more bittersweet, Byron scored his seventh win of the season the following week at Homestead-Miami Speedway (which would’ve secured the title if he was in contention), while Johnny Sauter was crowned champion.

Fortunately, Byron has rebounded from this loss quite well, winning the Xfinity championship in 2017 and two Cup races within the past year. But if his engine would’ve held on for just nine more laps in the 2016 Lucas Oil 250, he’d have two NASCAR championship trophies instead of just one.

That 2004 Dover race was one of the most bizarre in recent memory. Kahne’s teammate, Jeremy Mayfield, was leading at the time of The Big One and got caught up in it being the middle of the pack after a restart in the pre wave around days.
There was also a caution that took around 20 laps because NASCAR couldn’t figure out where to place Ryan Newman since he was on pit road when the caution came out.
I think only 4 or 5 cars finished on the lead lap, including my driver Jeff Burton in what may have been his last good finish for Roush in an unsponsored 99 car before going to RCR weeks later.

Alfredo running well? Seriously? He held up his entire line on a restart, forcing Martin Truex to fall back many positions and lose any chance he had of winning. If Truex had been able to move up to second, he would have had the opportunity to move Larson out of the way on the last restart, something Larson’s teammate was mysteriously unwilling to do.

At the end, it seemed Alfredo was spun out purposely by another frustrated driver.

Yeah, he was on the lead lap and had the right to stay out for the restart, but knowing he was on old tires and stood no chance of keeping up, why didn’t he just move the F out of the way?

Tom B
Reply to  Jo

I was thinking the same thing. It happens almost every week that some one stays out on old tires and messes up the cars behind him.