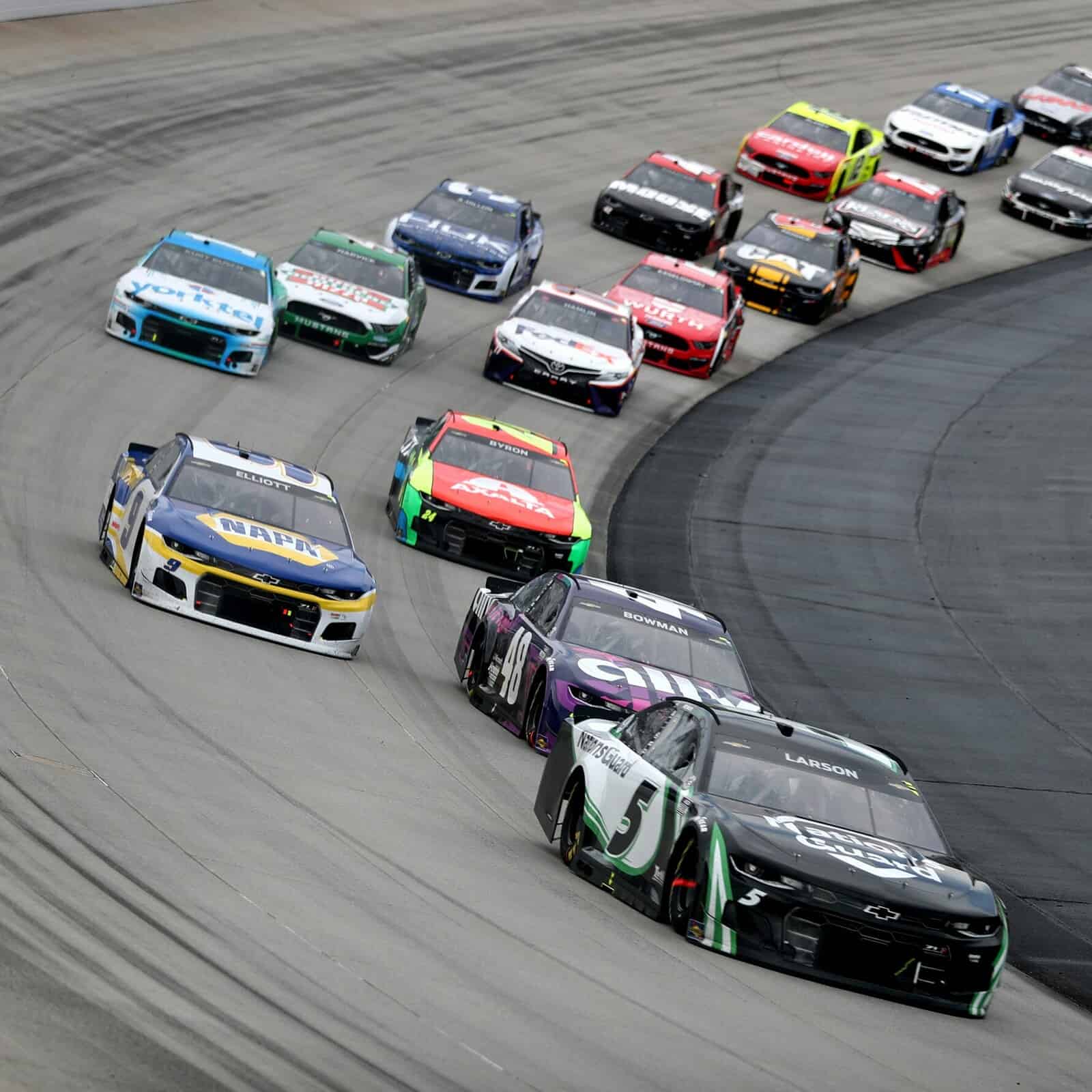 Sunday’s (May 16) Drydene 400 at Dover International Speedway could not have gone more perfectly for Rick Hendrick and the entire Hendrick Motorsports organization.

Between race winner Alex Bowman, runner-up Kyle Larson and fourth-place finisher William Byron, Hendrick had at least one of his cars in the lead for 382 out of 400 laps. And with Chase Elliott finishing in third, it gave the HMS organization the first 1-2-3-4 sweep in a NASCAR Cup Series race since Roush Fenway Racing pulled off the feat in the 2005 Ford 400 at Homestead-Miami Speedway.

See also
Up to Speed: Who’s the Biggest Championship Threat at Hendrick Motorsports?

In some races, race teams can have all their cars at the front of the field for most of the day, but anything can happen to alter the outcome and negate the achievement. Very rarely do race teams make it to the finish with all their cars at the top of the heap, yet Hendrick Motorsports did it on Sunday. Here are five other times where five different Cup Series teams managed to accomplish at least a 1-2-3 sweep:

Joe Gibbs Racing began the 2019 season on a somber note when former driver and team contributor JD Gibbs died on Jan. 11 of health problems at the age of 49. But his organization didn’t let his passing slow them down in the 2019 Daytona 500. An off-sequence pit strategy helped the majority of Toyota drivers stay together throughout most of the event, with then-Camry driver Matt DiBenedetto leading the most laps ahead of the four JGR teammates. But with 10 laps to go, the “Big One” wiped out DiBenedetto, Martin Truex Jr. and 15 other cars from the race. This left first and second place to Denny Hamlin and Kyle Busch, with Erik Jones’ bruised car lined up a few rows behind them.

Busch gave as much effort as he could to try and get by Hamlin’s No. 11 Toyota, but it was to no avail. Hamlin beat Busch across the line to win his second Daytona 500, while Jones snuck past Joey Logano off turn 4 to claim third place, making it an all-JGR podium. They swept the podium again at Homestead with eventual champion Busch leading Truex and Jones.

Stewart-Haas Racing also has a couple 1-2-3 finishes to be glad about. Clint Bowyer’s final Cup win in 2018 came in a 1-2-3 sweep for the team at Michigan Speedway, but the 2019 playoff race at Texas Motor Speedway was a clear indication of how solid the team’s 2019 season was.

Kevin Harvick came into Texas fifth in the playoff standings on the outside looking in. Yet he qualified on pole and was looking to have a great night. Aric Almirola just lost out on advancing to the next playoff round, but he had a fast Ford Mustang that could hold its own in clean air. Then there was Daniel Suarez, who was about to conclude his sole season with the team but was hoping to make one more good impression. And Bowyer was hoping to have another fast day and break back into victory lane.

The four SHR musketeers consistently put together a fast outing, leading a combined 242 of 334 total laps in the race. Harvick won stage one, and Almirola won stage two. Bowyer’s leading run eventually faded away, ending up 11th at the finish. But the other three teammates were still in the fight. As fast as they all were, Harvick’s pit crew allowed him to pull ahead on the final set of pit stops, and it was all she wrote.

Harvick would get his 49th career win and leap his way into the Championship 4. Almirola’s runner-up finish and Suarez’s third-place finish made it the second time that the team has posted a 1-2-3 sweep. This performance by SHR would help propel the team forward into the 2020 season, where more success would await them.

Here’s an underrated finish that may have faded from memory to many fans. But to Richard Childress and company, the ending to the 2008 Food City 500 at Bristol Motor Speedway is one that they haven’t forgotten about at all.

The three Joe Gibbs Racing cars of Hamlin, Busch and Tony Stewart were the class of the field for most of the race, leading a combined 372 out of 500 laps. But one by one, trouble eventually struck them all. Busch crashed while leading on lap 292. Then with just two laps to go, contact between Stewart and Harvick sent Stewart’s No. 20 Toyota backing into the turn 2 wall while running in second. Hamlin was left to carry the JGR banner to victory lane, but he suffered a fuel pickup issue on the overtime restart, allowing Jeff Burton to escape with the lead on the top of the track. Burton prevailed over Harvick and Bowyer for his 20th career Cup win.

This was the only instance of Richard Childress Racing securing a 1-2-3 finish. Since they only have a two-car team, it may be a long time before it happens again. But they did nab a 1-2 finish with Austin Dillon and Tyler Reddick at Texas Motor Speedway last year.

The Ford 400 marked the finale event of the 2005 season, with both a race win and a championship on the line. Stewart led the standings for much of the playoffs, with Jimmie Johnson hot on his tail. Greg Biffle and Carl Edwards were still mathematically eligible to win as well, but were a substantial distance from the championship lead. Kenny Wallace drove a fifth car for Roush in this race, filling in for a suspended Kurt Busch, but quietly finished down in 21st place.

Johnson suffered a lap 127 crash after having a tire go flat in turn 3, giving Stewart enough breathing room to cruise home with the championship. Meanwhile, it was a showdown for the win between the four Jack Roush cars of Biffle, Edwards, Mark Martin and Matt Kenseth. The team may have only led a combined 105 laps on the night, but the four drivers were there when it counted the most.

On the final restart, Biffle and Martin surged ahead of Dave Blaney and became the two prime contenders for the win. Biffle and Martin were neck-and-neck all throughout the final lap. But Biffle would get the edge over Martin by a bumper in a remarkable finish. Kenseth and Edwards passed Casey Mears to take third and fourth, certifying Roush’s best race. The quartet may have not walked out of Homestead with the grand prize that night, but that 1-2-3-4 sweep might just be accomplishment enough for the Cat in the Hat.

Sunday’s Drydene 400 wasn’t the first time Hendrick Motorsports had all their cars sweep the top finishing positions. In fact, the organization first reached this mark 24 years ago in the 1997 Daytona 500.

Jeff Gordon was looking to avenge his 1996 championship loss to Terry Labonte despite having more wins than him. On top of that, team owner Rick Hendrick was not present at Daytona for Speedweeks due to health issues. Even with his absence, the desire to win the sport’s biggest race remained the same for his cars and drivers.

Gordon led 40 laps during the event and ran in the top five for most of the day. After Dale Earnhardt’s spectacular flip down the backstretch on lap 188, the race came down to an eight-lap dash to the checkers between Bill Elliott, Gordon and Labonte. With six laps to go, Gordon made the winning pass on Elliott going into turn 1, bringing teammates Labonte and Ricky Craven along with him. A multi-car crash out of turn 4 brought out the caution on the very next lap. With no time left for a restart, Gordon led the field across the line at pace speed to score his first Daytona 500 victory. Labonte came home second, with Craven in third.

It was Gordon’s 20th career Cup win. The victory served as sweet relief for both he and the entire Hendrick organization, as well as a catalyst for their eventual dominance in the late 1990s.