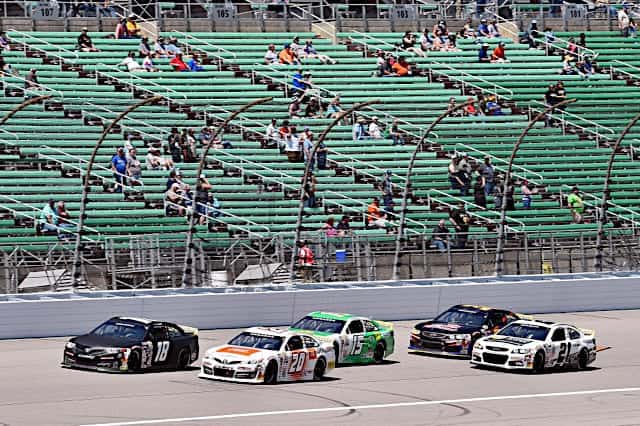 Following the Dutch Boy 150 at Kansas Speedway, 20% (four of 20) of the ARCA Menards Series season has been completed. In that race, Ty Gibbs absolutely dominated the race en route to his second victory of the season.

Gibbs and Corey Heim have split the series victories at two apiece after Gibbs won at Phoenix Raceway and Heim swept the superspeedways of Daytona International Speedway and Talladega Superspeedway.

ARCA competitors have two race weekends off before they travel to Toledo Speedway for the first race of the ARCA Menards Series Sioux Chief Showdown, a 10-race championship within the main ARCA schedule. With one-fifth of the ARCA season already in the history books, who’s hot and who’s not?

Gibbs left the season opener at Daytona frustrated with the race conclusion, but he still finished fourth. He found happiness at Daytona Beach though when he won his NASCAR Xfinity Series debut at the Daytona road course.

Yes, Gibbs has the two ARCA wins, but his Kansas victory was a tremendous recovery to his championship odds following his career-worst finish of 27th due to his involvement in a wreck at Talladega. Meanwhile, Heim won, growing his points lead.

Gibbs led every lap at Kansas, including winning the pole, and closed his deficit to Heim to a manageable 23 points. He leads all series regulars with 10 wins. A few more victories by Gibbs will tighten his championship battle with Heim.

Nick Sanchez and Rev Racing knew this year would be a challenge. Both driver and team made the jump to full-time status. Their rookie status has shown at times.

Sanchez started his season with back-to-back DNFs due to his involvement in a crash at Daytona and a hard hit into the wall at Phoenix.

Man, @Nicksanchez080's car is DESTROYED. Glad he climbed from the @RevRacin machine under his own power @phoenixraceway. ??

He tangled with a lapped car while running inside the top five. ? pic.twitter.com/LrnyGTJh5a

Since then, he has wheeled his No. 2 Chevrolet to back-to-back top-10 finishes, including a career-best third at Talladega. However, in that same race, his team was displeased with him after Sanchez mistakenly caused a wreck due to a bump draft gone wrong on Greg Van Alst.

Yes, Sanchez finished ninth at Kansas, but he was two laps down. He cut a left rear tire early in the race, the cautions did not fall his way, and ultimately, he could not recover. Still, Sanchez must avoid those rookie mistakes if he wants to both compete for wins this year as well as climb up the point standings. He is in seventh place, already 67 points behind.

Heim recorded his worst finish of this season at Kansas – third! He is the only driver to finish inside the top five in all the races this year.

Consider this: in 20 career ARCA races, Heim has one finish outside the top 10, 11th place in the 2019 race at Fairgrounds Speedway Nashville.

Furthermore, Heim has five straight top fives dating back to last year. He has shined driving the No. 20 Venturini Motorsports Toyota, and he currently has a 13-point lead over his teammate Drew Dollar.

Heim’s success has landed him a two-race stint in the NASCAR Camping World Truck Series with Kyle Busch Motorsports, with his first race set for Darlington Raceway.

Heim has won three of the last five ARCA races dating back to last year. For all the hype given to Gibbs in the preseason, including three media members choosing Gibbs as the champion, Heim is the hottest driver in the ARCA garage.

The news is out! Making my @NASCAR_Trucks debut at Darlington next month! So thankful for @ToyotaRacing for making this happen. See you there @KBMteam! #TeamToyota

Young’s Motorsports entered ARCA ownership this year with Toni Breidinger as its driver. In four races, she has not impressed with zero top 10s and sits at ninth place in the point standings.

Breidinger entered this year with only three ARCA starts, but she has quietly underperformed. She finished 18th in the season opener at Daytona, then last (30th) at Phoenix after she was involved in an opening-lap crash. She finished 12th at both Talladega and Kansas, but those finishes were ho-hum. At Kansas specifically, she finished 10 laps down.

Breidinger kept her No. 02 Chevrolet in one piece, but she did not make headlines when three drivers achieved their career-best finish with top-10 runs. As Young’s Motorsports seeks to expand Breidinger’s schedule, finishing outside the top 10 when only 20 drivers competed is not ideal for potential sponsors.

Three drivers have finished inside the top 10 in all ARCA races this year – Heim, Drew Dollar and Kyle Sieg. After making three starts last year, Sieg has burst onto the scene this year.

With veteran Jeff Green atop the pit box, Sieg earned his career-best finish of fourth at Phoenix. He finished eighth in the past two races, and Sieg is fourth in the point standings.

Sieg will also make his Xfinity Series debut at Dover International Speedway. While RSS Racing has not confirmed Sieg will run this full season, Sieg told News From The Pits he is slated to compete in all the races except for the two dirt track events.

Sieg has run clean races thus far, and RSS Racing has brought him fast No. 28 cars.

If the team can secure more funding and or another car, Sieg could run full-time and one of his good runs could translate into his first career victory.

P8 for Kyle Sieg and the #28 team today at Kansas. Kyle ran a smart and clean race while gaining experience for his first trip to a 1.5 mile track. Thanks to everyone for supporting Kyle and the team. pic.twitter.com/P9YuKEehmv

Gracie Trotter is only running part-time this year for Venturini Motorsports, but her foray into the main series has not gone well. Despite starting in the top 10 in her three races, she has finished outside the top 20 in all three.

She led eight laps at Daytona and appeared to be headed for a good finish. On lap 28, she made contact with her teammate Derek Griffith, and it resulted in a large wreck claiming several drivers.

Gracie Trotter Spins Teammate Derek Griffith & Collects A Lot Of Cars In A Big Wreck Including Greg Van Alst, Nick Sanchez, Another Teammate Drew Dollar & Scott Melton At The Arca Race At Daytona Brings Out The 2nd Caution Of The Day – pic.twitter.com/nVqfaHJBw4

Griffith blamed the wreck on Trotter, claiming it could have easily been avoided. It was her first superspeedway start.

AUDIO ONLY (only had 56 seconds available for video): I chatted with Derek Griffith regarding what happened at Daytona that ended his afternoon after an incident with Gracie Trotter. #ARCA pic.twitter.com/Gu1g7yqSis

In the next race, Trotter did not even complete one lap. She drove her No. 25 Toyota hard into turn 2 and it left four drivers with DNFs.

“These short days in the ARCA series at Phoenix has really been the story for the past few years,” he told MAVTV. “It’s always something. I don’t know what else I could’ve done there. I feel like I got cleaned out.”

Trotter did not upset anyone at Talladega, but she made contact with another driver which caused a blown left front tire. As a result, she pitted, but the unscheduled stop led to finishing two laps down in 22nd place.

Trotter is scheduled to drive in nine main ARCA races. With one-third of her season complete, she has not impressed, an unfortunate occurrence following her third-place finish last year in the ARCA Menards Series West, including a win at The Bullring at Las Vegas Motor Speedway.

Trotter will have a chance to redeem herself in the upcoming race at Toledo Speedway though. She will look to keep her Toyota clean and hopefully notch her first top 10 finish of this year.

It would be great to see a 30 race ARCA season as they used to have…and a 28 race Craftsman truck season instead of these 22 race farces. Sponsor want full exposure not short attention spans from the cellphone generation.