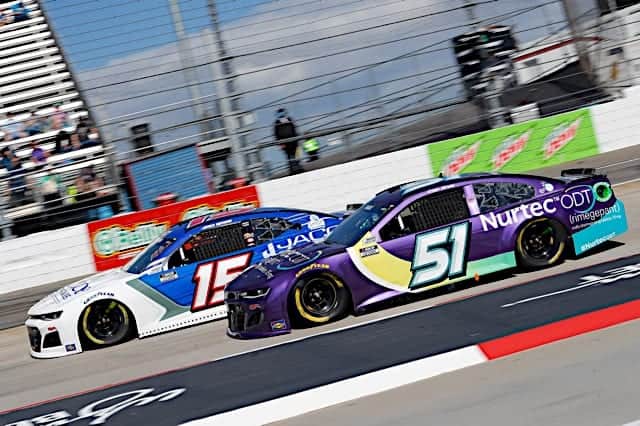 Despite its best outing of the NASCAR Cup Series 2021 season Sunday (April 11) at Martinsville Speedway, Rick Ware Racing left the track with inner turmoil due to a feud between drivers James Davison and Cody Ware.

RWR placed all four of its cars in the top 30 for the first time since Talladega Superspeedway in the fall of 2020. Davison and Josh Bilicki both posted career-best finishes in 22nd and 23rd, respectively.

But instead of the solid performance catching peoples’ attention, it was instead the damaged relationship between Davison and Cody Ware, son of team owner Rick Ware, that jumped into the spotlight.

The feud caught the NASCAR world’s attention on lap 37 of the 500-lap race when contact from Ware’s right front fender into Davison’s left rear quarterpanel sent the Australian driver spinning into the outside wall. That’s all the FOX Sports 1 cameras caught, but according to Davison, the pair had been racing hard for the laps leading up to that.

“I understand Cody wasn’t happy with how hard I was racing him,” Davison told Frontstretch. “I didn’t feel that I was doing anything wrong. However, that’s immaterial to what he felt. And so he did what he did and put his bumper on me and turned me around twice. And I had to accept that, again, regardless of what I thought.”

Reached out to Rick Ware about the incident between Cody Ware and James Davison.

Ware says he's not happy and "needs to figure this out." #NASCAR

Despite both drivers having the night to cool off after the rest of the race was postponed to the next day, Davison and Ware allegedly continued to show their displeasure with each other on the racetrack and on the Nos. 15 and 51 radios.

Cody Ware: "Anytime he's ahead of us (Davidson) he's getting turned, im not fighting him no more."

Crew Cheif or Spotter: "Cut that out"

51 ran into Davison intentionally again on the restart

Ware’s Twitter bio says, “Mental Health Advocate,” and he’s been very outspoken about his own mental health issues in the past. So the comments from Davison rubbed many the wrong way.

“I’m learning I’m not perfect,” Davison said. “We’re all going to make mistakes. And as long as we own up to them, our actions or anything we say and don’t try to repeat the same mistakes and so on, I feel that’s all you can really expect out of a human being.”

Davison noted he got a little too heated on the radio because he just wanted Ware to stop roughing up his car.

“Some things were said on the radio, I had to be very strong on the radio to try and put an end to it,” Davison said. “And it appears that it led to the team manager [Ken Evans] telling Cody that if he was to hit me again, that he would get parked by the team.

“To Cody’s credit, he raced me respectfully [after the team said they’d park him], and I raced him … I backed off and let him by when he was on some fresher tires, and he waved to me on the exit.

“And with that said, things are not just fine with Cody and I, but that was progress.”

Davison and Ware raced each other clean the rest of the way and worked their way up to finish 23rd and 28th. Davison noted one of his highlights was catching Ross Chastain‘s Chip Ganassi Racing Chevrolet on the track, although they weren’t racing for position.

“[We had a] competitive pace. equal to some of the big team guys,” Davison said. “Just never thought that was going to be possible.”

Following the race, Davison discussed the events of the day with boss Rick Ware.

“Rick just said to me that there’s times where I can not race as hard,” Davison said. “And he said, ‘Obviously, Cody, taking you out doesn’t need to be happening either.’ So like I said, in the end, Cody and I respected each other on the track. It’s going to take some time for things to just improve on a personal relationship level.

“But ultimately, yeah, we just respected each other’s races. And that’s I guess the minimum you can hope for that we at least achieved in a very short period of time.”

However, a few laps of racing each other clean doesn’t mean the relationship with Davison and Ware is sunshine and roses. They still have a ways to go to mend a friendship that was strong as recently as this past December, when the duo stayed in the same hotel room for an entire week during a skiing trip.

After this one, Davison made a peace offering by reaching out to Ware following the race.

“I just want to be the best man I can be and just apologize for my part in any of it,” Davison said. “I didn’t feel any of his actions were warranted, but in the end, we all have to get along. And I know I’m not perfect myself, and I live and learn like we all should, and so I just put my hand up and just reached out to him …

“Obviously I wasn’t happy about getting turned around twice. I just want to be the bigger man and just try and have peace. I don’t like having false enemies. And I know Cody’s a good guy. … It’s just a completely different world when you’re behind the wheel of a stock car and everyone’s fighting for this small piece of pie that exists.”

Whether or not the Davison and Ware feud carries over remains to be seen. But it will be tested immediately, as the Cup Series heads to another short track this weekend in Richmond Raceway. Mending fences is crucial; with Ware running the full Cup schedule and Davison electing to skip the Indianapolis 500 so that he can run more Cup races, the duo are going to share the racetrack a lot more in the future.

“I don’t want you to think that things are just okay all of a sudden, like I mentioned,” Davison said. “But I’ve made an effort to try and make things okay. And whether they will be remains to be seen. I hope they will be okay.”

Frontstretch reached out to Cody Ware for comment but did not receive one by press time.

I know if Cody Ware had any mental capacity at all it would dawn on him not to
wreck his teammates which is the first rule in racing.

Racing is racing @Matthew Marks. Sure, you don’t want to wreck a teammate at all but say, if it’s the Daytona 500, you’ve gotta go for the win. I enjoyed this article because it is so much more in-depth than others I’ve read on this incident. I’m sure Rick W has given Cody W a talking too. Here’s hoping they reconcile.

Uhhh, they were racing for 30th at the time and not the daytona win. Big difference. Very early in the race so why chance wrecking your teammate. Makes no sense at all.

Something else i’m trying to figure out is what sanctioning body in
there right mind allows someone who is mentally ill to get a license
to race since that could be a liability issue to itself.

Probably because there are plenty of people in who live with mental illness and are able to cope and even thrive. It may take medication, therapy, or both but so long as Cody isn’t taking any medicine that puts him or another competitor at risk there’s no reason that what is legally recognized as a disability should prohibit his participation.