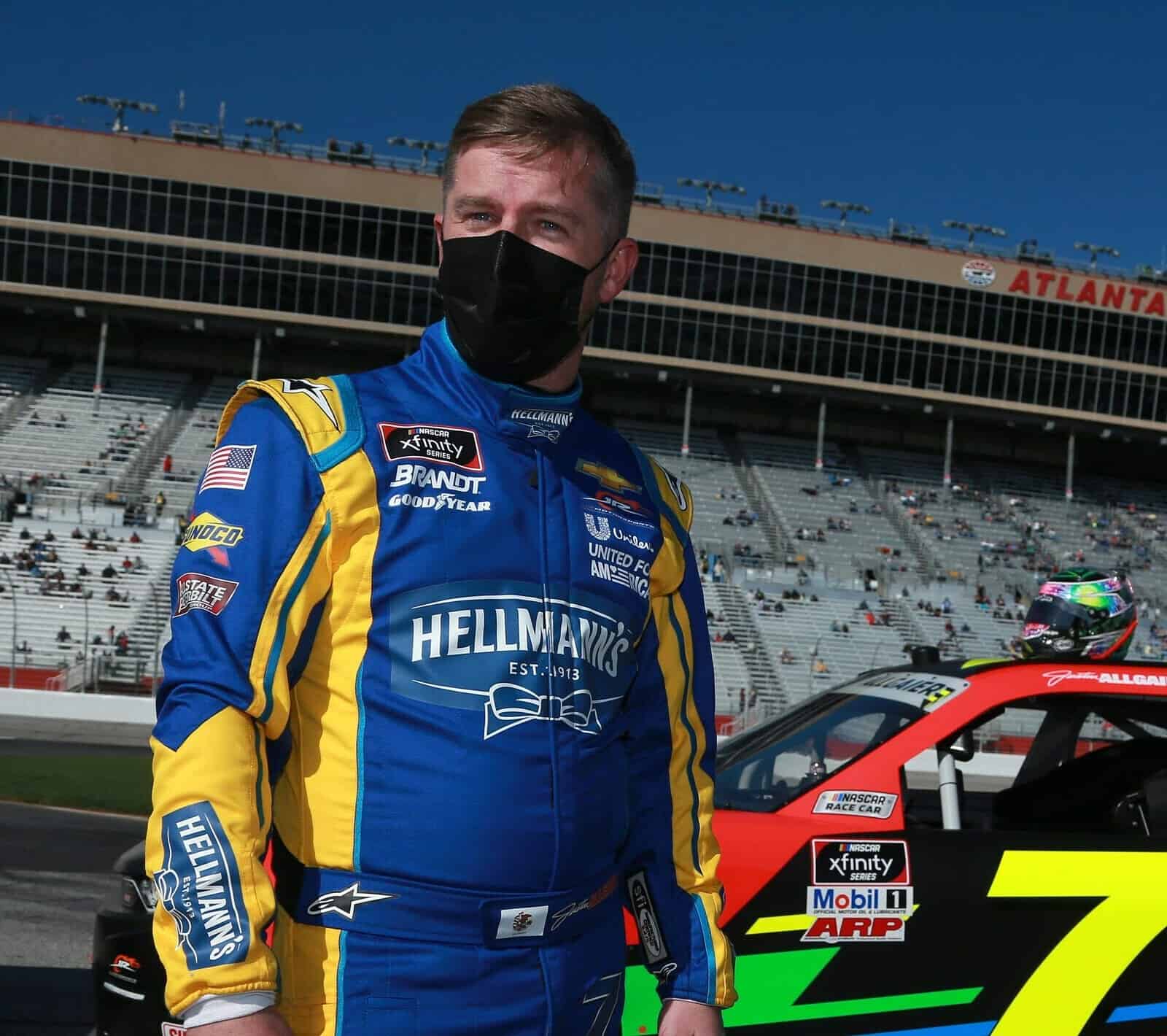 You don’t need me to remind you how long, hot and weird the summer of 2020 was.

A lot of it’s a blur, for better or worse. But one moment that’s stuck with me in the ensuing year came on June 1.

That night, the Xfinity Series competed at Bristol Motor Speedway in its third race after returning from the COVID-19 shutdown.

Justin Allgaier, the man to beat that night, led 156 of 303 laps. But his race ended when he and teammate Noah Gragson made contact battling for the lead with five laps left in the scheduled distance.

Allgaier wound up in the inside wall. Gragson earned his second win of the season.

It was the third in a stretch of four consecutive Bristol races that saw Allgaier lead 126 or more laps and fail to win.

The next morning, I checked Allgaier’s Twitter feed. At 3 a.m. ET, the then-33-year-old JR Motorsports driver shared a link to his Twitch account inviting anyone else who was awake to watch him play Call of Duty Warzone as he decompressed after a disappointing night at the race track.

Been a LONG day…just got home, and cant sleep. streaming a little Call of Duty Warzone…..come hang out! https://t.co/Gcivp5jwXi

During the height of the pandemic, Twitch was Allgaier’s outlet to keep from going “absolutely haywire” while stuck at home.

“I feel like this sport has a way of eating you up from the inside out,” Allgaier told Frontstretch on March 25. NASCAR is a “very over-the-top job, right? I think you still need to see that there’s a lot of emotion that goes into it. And a lot of a lot of hurt, a lot of anger, a lot of frustration. … I felt like if I didn’t get it out (after Bristol), my head was gonna explode anyways. So it was good to be able to do that and do it in a manner that I felt like was not hurtful or bashing anyone or any particular thing.”

Hear more from Allgaier about his Twitch gaming habits here.

That anger and frustration were on full display in the immediate aftermath of the March 20 Xfinity race at Atlanta Motor Speedway.

All of it immediately overshadowed Allgaier, who was celebrating on the frontstretch after he earned his first win of the season and the 15th of his career.

In the week that followed — and for the second time in the first six races of the year — more attention was given to the continued misadventures of Gragson than the person who took home the checkered flag.

While Gragson hasn’t won a race since that June night in Bristol (and has failed to finish 50% of the races this season), in the same time, Allgaier made the Championship 4 last season and has won three races. That gives him 12 career wins with JR Motorsports, which leads the team all-time.

Also overlooked: Allgaier has won at least one race in each of the last five seasons. He’s the first full-time Xfinity Series driver (not counting those who were full-time in Cup at the same time) to accomplish that since Jason Keller in 1999-2003.

Allgaier, now 34, is in his 11th full-time Xfinity campaign. He made his first start in 2008, when the “Buschwacking” Era of Cup drivers dominating the series was hitting its groove and caused the gap between Keller’s and his streaks.

Having experienced its peak while enjoying success after its near elimination, Allgaier reflected on the pros and cons of the respective environments for young drivers.

“I ran my first Xfinity Series race in (October) 2008 (at) Charlotte, and I think 26 or 27 of the (53) guys that attempted the race were full-time Cup guys and were going to race the next day,” Allgaier said. “Not retired, not part-time Cup guys. They were literally full-time Cup guys.  … I love the fact that (now) there’s a lot of up-and-coming drivers that are getting opportunities in cars that used to be filled by Cup series regulars that were full-time.

“It gives more people opportunity. But in some ways, I think that it creates a false sense of panic or normalcy to what some of these younger drivers have to deal with. And it’s kind of disappointing for our younger drivers, they didn’t get to experience kind of the way that that I grew up racing.”

In the present, Allgaier’s mindset in the closing laps of his Atlanta win after enduring five weeks of “utter misery” could have been mistaken for the “panic” he described.

“The biggest thing for me the last 50 laps of the race was just don’t make a mistake, don’t do something stupid, don’t put myself in a bad position,” Allgaier said. “I was extremely nervous about just all the little things that could happen. And I think that as a driver, one thing never changes. I don’t care if you win one race or 1,000, you get down to the end of these and we all realize as drivers how hard they are to win and how important they are for us.”

The No. 7 team’s blinders were on so tight in Atlanta, Allgaier wasn’t even aware it was a qualifying race for the Dash 4 Cash (neither did I), which begins this Friday night (April 9) at Martinsville Speedway. It will be the Xfinity Series’ second Martinsville race since 2007. In last year’s event, held without practice, Allgaier finished second to Harrison Burton. Gragson placed third.

All three of them, along with AJ Allmendinger, will go for the first $100,000 bonus Friday. While Burton, Allgaier and Gragson placed 1-2-3 last fall, Allmendinger finished 26th after leading 68 laps.

“I don’t know what to expect when we go back,” Allgaier said. “We kind of flew blind (without practice last year) and I think a lot of teams learned a decent amount. I looked at the Dash 4 Cash. All four of (us) I believe at some point during the course of the day led a decent amount of laps at Martinsville (Allgaier led none). … I feel like you put four super aggressive drivers in a blender and say, ‘Okay, we’re gonna go to Martinsville, you guys go mix it up,’ that’s gonna be interesting.”