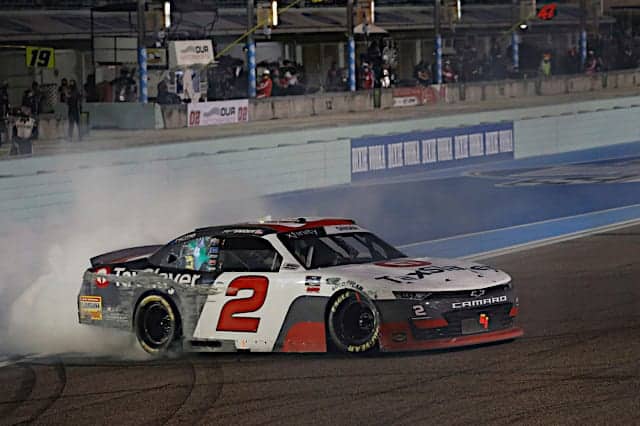 We all remember when Homestead-Miami Speedway hosted NASCAR’s finale weekend from 2002-19. Many fantastic championship battles were fought, which included many joys and many heartbreaks to go along with them. The speedway, though, lost its finale weekend to Phoenix Raceway in 2020, signifying the end of a historic tradition.

But the speedway hosted races that weren’t the season finale in both the NASCAR Cup and Camping World Truck series in its early years. Plenty of amazing races happened during that time that have been more or less swept under the rug by fans. And we’ve also seen great moments happen already in its current spot on the schedule.

In this edition of Frontstretch 5, we will rack up five of the most iconic races to happen at Homestead, both classic and modern, that did not fall under a season finale date.

With the memory of this race still fresh in our heads, it should be easy to recall all of the factors that made this year’s Contender Boats 250 so good.

Austin Cindric and A.J. Allmendinger showed the way through the first two stages. Even after tagging the wall on a lap 89 restart, Noah Gragson looked to be the strongest contender and was in the perfect position to score his first win of the season. That was until he approached turn 3 with two laps to go, when the now-infamous incident between the No. 9 and David Starr occurred. Starr cut a tire and slid up the track right in front of Gragson, bashing in the front end of the JR Motorsports Chevrolet and taking Gragson out of the race for good.

This forced the race into overtime, with Myatt Snider and two-time champion Tyler Reddick sharing the front row. Allmendinger spun in turn 1 to draw a quick yellow and set up a second overtime attempt. With Reddick in his preferred line on the outside, it seemed as if he had the race sealed up and put away. But on the restart, Snider got the better advantage, clearing Reddick before the pack entered the backstretch. Reddick closed in on Snider’s rear bumper as the field came off the final turn, but it wasn’t enough. A joyous Snider secured his first NASCAR national touring series win, becoming the sixth driver to get his first career Xfinity win at Homestead.

With entertaining restarts, hard crashes, hot tempers and a first-time winner, the 2021 Contender Boats 250 poured out all the good treats in the bag, making for one unforgettable race under southern Florida’s moonlight.

The dawn of the 1996 Truck Series season was greeted with sunny skies for the Truck Series’ maiden visit to Homestead-Miami. And it was a solid first impression, if there ever was one.

Mike Skinner led a race-high 79 laps, but a crash with polesitter Geoff Bodine knocked Skinner out of contention. Afterwards, control of the race was split between Dave Rezendes, Ron Hornaday Jr. and Jack Sprague.

It wasn’t necessarily a fast-paced race, as the event was slowed down by 11 caution flags: a track record still held to this day. The finish, though, is what gives this race something to talk about.

On the final lap, leader Rezendes caught a lapped truck at the exit of turn 2, slowing down his exit speed and allowing Hornaday and Sprague to close in at a rapid rate. It then became a door-slamming slugfest for the win between the three drivers in the final two turns. Coming to the stripe, Rezendes was able to hang on for his first-ever win while Sprague spun sideways behind him for second.

Although Homestead was left off the Truck Series schedule for 2021, this entertaining finish on that day in March 1996 was the perfect igniter for the series to keep making annual visits there. Hopefully, a decision will be made for the speedway to have Trucks back on its racing surface again in 2022.

Overtime finishes in NASCAR are nothing new, especially in the Truck Series. Case in point: the season-opening Florida Dodge Dealers 400k in 1999.

The race was mostly controlled by polesitter Randy Tolsma and Mike Wallace, who led a combined 91 laps out of the scheduled 167. In a race highlighted by an abnormally high attrition rate and hard crashes, it came down to an overtime finish. The battle for the win ended up being between Wallace and the late Mike Stefanik, who was making just his second career start.

In the end, Wallace pulled away from Stefanik to score his first ever Truck Series win, making himself the fourth consecutive first-time winner at the track. Stefanik went on to win Rookie of the Year honors in 1999, and his runner-up finish was a great starting point to that endeavor.

Only 15 trucks were left running at the finish, making the event one of the highest attrition-filled races in series history. And with the race’s distance being extended to a total of 258 miles (172 laps), it makes the race one of the longest in series history on a mile-and-a-half track, in terms of distance.

For Gragson, his record of heartbreaks at Homestead extends back to the Xfinity Series’ doubleheader weekend in 2020. After just missing out on a win by Harrison Burton in the first event the day before, Gragson was on point to redeem that loss. He led a race-high 81 laps before a spin by Cindric forced the race to go into overtime.

Gragson went into the pits as the leader, but left the pits second behind Chase Briscoe. When the green flag flew, Gragson couldn’t mount a charge to challenge Briscoe. A hard crash between Daniel Hemric and Riley Herbst drew another overtime attempt. Gragson fell even further back, as Briscoe took control once again, but Brandon Jones found a strong surge in momentum coming off the final turn.

In a nail-biting drag race to the start/finish line, Briscoe triumphed over Jones by a slim margin of 0.072 seconds, making it the second-closest finish in series history at the speedway and the closest since Jeff Burton’s narrow 0.01-second win over Jimmy Spencer in 1998.

This win by Briscoe became one of many puzzle pieces that made up his phenomenal 2020 season. For Jones and Gragson, this race will be looked at as one that escaped from their grasps.

The 2001 Cup Series season was on its final legs going into Homestead. Bill Elliott, who hadn’t won a points-paying race since the 1994 Southern 500 at Darlington Raceway, won his second pole of the season. Qualifying to the outside of him was Evernham Motorsports teammate Casey Atwood, who was looking for positive closure to a mostly dull rookie season.

The two stablemates kept identical paces for most of the day. Elliott led 59 laps, while Atwood led for 52. Atwood encountered a major scare under the race’s second caution, when contact between he and Ward Burton on pit road sent Burton’s car hurtling into several of Ricky Rudd’s pit crew members. Thankfully, everyone was okay.

In the race’s final stint, Atwood took advantage of the clean air to hold the lead. But, with weaker tires, Atwood couldn’t hang on, as Elliott made the winning pass on him with five laps to go. Elliott finally ended the long winless streak, while Atwood had to settle for third after being passed by Michael Waltrip on the last lap.

Elliott scored three more wins over the next two seasons to add onto his career-win tally. However, Atwood continued to struggle for the rest of his tenure in the Cup Series, completely falling out of it by mid-2003. But, with the union of the circumstances surrounding the legend and the rookie and their terrific battle for the win, it gives the 2001 Pennzoil Freedom 400 a memorable status.