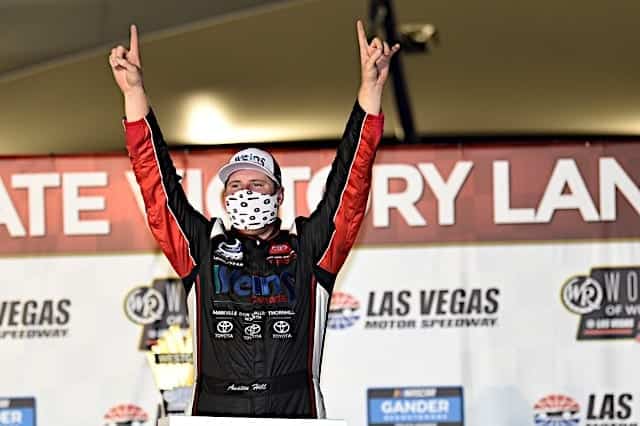 He may have not led the most laps or had the dominant truck, but Austin Hill is now a two-time winner at Las Vegas Motor Speedway.

However, the World of Westgate 200 was as much about Hill’s victory as it was about Sheldon Creed‘s late-race collapse.

Creed’s No. 2 GMS Racing Chevrolet was out front most of the night, having won both stages and leading nearly three-quarters of the race.

However, on a restart with 37 laps to go following Jordan Anderson‘s engine failure, Creed fell outside of the top 10 from the lead in one corner after being caught napping. Creed’s dramatic fall was just what Hill needed. He was able to sprint away with the win.

“We didn’t have the best truck tonight by no means,” Hill told Fox Sports 1. “We had to fight a lot of adversity in stages 1 and 2. It wasn’t good at all. Scott [Zipadelli] and the guys kept working on it and got it better. The pit crew did a hell of a job on that last pit stop getting me in that position.”

Despite the poor restart, Creed made a valiant charge through the field, even catching the leader Hill. But after hitting the wall with 11 laps to go, Creed’s effort went sour. A disappointed Creed limped home to a runner-up finish.

Before the event even commenced, one driver was unable to take the green flag. Natalie Decker did not receive medical clearance to compete. With a replacement driver unable to be found, the No. 44 Niece Motorsports entry was awarded last place in the field of 36 trucks.

Rhodes, who is in the thick of the playoff battle, faced an unnerving and bizarre situation throughout the night. Under the lap 10 competition caution, Rhodes’s No. 99 truck began smoking. Although the team sent the Kentucky driver back out, the truck continued to smoke, but only at caution speed.

"I smell oil." @benrhodes returns to pit road during the competition caution for a possible mechanical issue. pic.twitter.com/cmIhAeDZzP

While battling hard with Stewart Friesen and Todd Gilliland, Rhodes lost control exiting the second turn, spun, and backed his Ford into the wall. To make matters worse, the truck subsequently caught fire while sitting on pit road.

Ben Rhodes goes around and backs it into the wall at Las Vegas! pic.twitter.com/PK2oYw2ihg

Rhodes finished 23rd. With Talladega Superspeedway looming on the horizon, Rhodes has his work cut out to advance to the next round of the postseason as he now sits six-point outside the cutline.

Behind Hill and Creed was Tanner Gray, Friesen and Chandler Smith rounded out the top five positions.

The pickups will return to action at Talladega Superspeedway for the Chevrolet Silverado 250 on Saturday, Oct. 3. The green flag is scheduled to drop at 1:00 p.m. ET with TV coverage provided by Fox Sports 1.

I watched the first two stages, got bored and changed the channel to a EMS rescue show. I won’t say the race was awful, but it was not very engaging. It’s the first truck race I’ve watched all season, and probably the last.

There were two cautions in the first 35 laps, one a completion caution, and one at the end of stage one. Really, Nascar?

Gotta keep the TV networks happy, even if people would rather watch a checkers competition.