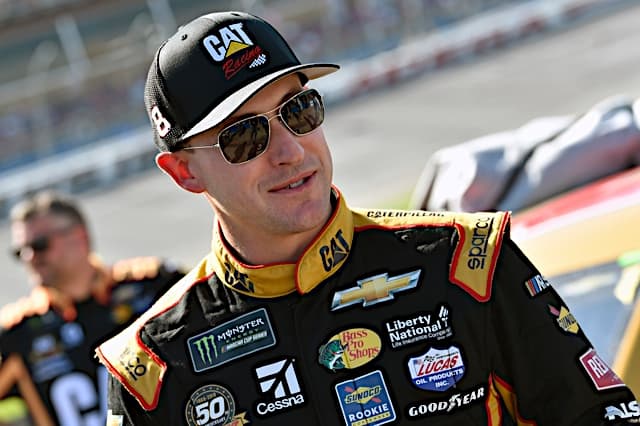 Did You Notice? …. Daniel Hemric never won a NASCAR race? That’s the tough answer for critics crying foul over Richard Childress Racing’s decision Tuesday (Sept. 17) to release Hemric from his Monster Energy NASCAR Cup Series ride at the end of the season.

That’s a hard pill to swallow for a personable, energetic 28-year-old driver who’s currently leading the Rookie of the Year race. Hemric may only have just one top-five finish this year but that’s one more than teammate Austin Dillon. RCR as a whole has had a down year across the board on the Cup side; no one using their chassis or engine combination made the postseason. The best average finish for any RCR-aligned driver is Dillon with a mediocre 20.2.

The problem for Hemric is there’s one shining star within the whole RCR organization right now: reigning NASCAR Xfinity Series champion Tyler Reddick. Reddick enters the postseason in position to deliver a second straight championship, earning five wins and 20 top-five finishes in 26 races. It’s a resume that’s Cup-level ready, growing within an organization that can’t afford to lose him.

But RCR’s awful 2019 has made finding additional sponsorship a virtual impossibility. As it is, longtime backer Dow Chemical hasn’t been seen on its No. 3 car in months. (The team insists they’ll be back at full speed come February 2020). So faced with the prospect of three drivers battling over two Cup seats, it comes down to a comparison between Hemric and Reddick.

That’s where Hemric’s resume, as heartwarming a story as it may be, falls short. He’s now had 145 career starts across NASCAR’s top-tier divisions, many of which came in equipment capable of winning. He’s earned a respectable 39 top-five finishes along with two Championship 4 appearances in the Xfinity title chase.

But none of those starts in Trucks, Xfinity or Cup ended in victory lane. In Hemric’s entire career, he’s led 662 laps across the board; Reddick’s led 719 laps in Xfinity alone the past three seasons. Hemric’s expected replacement in the No. 8 Cup car for 2020 brings that perfect blend of consistency and winning pedigree RCR’s been looking for. Heck, he already has a top-10 finish in Cup this year driving a part-time schedule.

It’s a tough break for Hemric, a driver who really deserved a second year to sharpen his skills in Cup. But a NASCAR garage built on fleeting financial support these days doesn’t allow for the type of patience given to other drivers as recently as 10 years ago. Consistency can only do you so many favors in middle-tier equipment, especially when a win earns you an automatic playoff berth.

That’s where the focus is these days, on the championship, and it’s clear Reddick gives RCR a better chance to deliver on that goal year in and year out.

Did You Notice? … Contact has been a part of some of the biggest moments in NASCAR? You have the 1979 Daytona 500, where Donnie Allison and Cale Yarborough banged fenders on the final lap before crashing in a heap of metal on the backstretch. There was the 2003 race at Darlington in which Ricky Craven and Kurt Busch used every ounce of their race cars in a finish that was settled by inches. As recently as last summer, a battle between Kyle Busch and Kyle Larson became the most talked about ending in the history of Chicagoland Speedway.

The problem is, too often these days, contact is causing unintended consequences. Take last week’s wreck at Las Vegas Motor Speedway between Kurt Busch and Martin Truex Jr. A little bit of fender-rubbing on a restart between them caused Busch to slam into the wall with a flat tire just a few laps later. The type of racing that would cause cheers from the grandstands ruined a race driver’s day instead… and became a lesson for other playoff drivers not to try it.

“Everyone wants to try to get in the middle and that’s where you make up the most spots,” Kurt Busch explained afterwards. “Truex and I were going for the same piece of real estate.

“We ended up four wide, got a fender rub and the day is done. It just happens that fast.”
It was a cut tire from a fender rub when the cars were coming up to speed. Clearly, the laws of physics can’t be changed. But you look back at all the contact that built NASCAR from the 1980s and 1990s. What is wrong with these cars that they’re built in a way just a tiny bit of contact ends someone’s day? It wasn’t just Kurt that had this type of problem, either. Kyle Busch was on pit road early in the race after giving the outside wall a little love tap.

“It’s unfortunate that you just barely touch somebody and you have a flat tire,” Chase Elliott told NBCSN after the race. “But that’s the box that we’re in. That really needs to be addressed… it’s hard to be aggressive and not make a little mistake here or there.”

Those little “mistakes,” the kind the sport was built on may have kept Kurt Busch from advancing in the playoffs, potentially ruining an impressive year for him at Chip Ganassi Racing.

It’s an issue one can only hope the new Gen-7 chassis is attempting to address.

Winning in lower series is starting to get hyped. It’s a great accomplishment, and everyone wants to win, but people start to go nuts when a driver wins 4, 5, or 6 races. The problem is back in the early 2000s if a driver did that, then they were ready; but too many times in the past 7 years has a driver done the same and then is a bust. Reddick has great potential; but despite a title last year he really wasn’t one of the top 4 drivers. Byron, Suarez, Stenhouse, and Dillon all won a lot, and now they can barely win or not win a Cup race. Hemric has potential, and can be a great success. RCR is just not good equipment. Plus, Reddick was the main focus in Xfinity instead of multiple full time cars.

I noticed he did not win a race. I notice that Matty D. has never won anything in the 3 top tier
series in NASCAR. I notice people howling at the moon crying foul over Hemric. They cried foul over
Matty D. being fired..and now cheer what a great driver he is and will NOW perform with his new ride. He will be transformed, and was never given good equipment…blah, blah, blah, blah, blah. Based on what, that he
is purported to be a nice guy? So therefore he deserves a ride? PFFFTTT….

Bunch of people over run with emotions, but zero facts to back up their claims of “great driver”, ” he deserves..fill in the blank”. ETC. Racer’s Reference is not their friend.

Well maybe when it is your dime and time, the feelings would be different. He who signs the checks gets to call the shots…whether we like it or not.

My thought on SMI going private: they are going to make an offer to buy NASCAR. How, they have the money. Also, they agree to keep Ben Kennedy and Jim France at the head, put Lisa Kennedy on the board, and have an agreed-to period where they keep most of the operations team in tact.
THEN, they sell to a developer Fontana and probably Kansas. Then start re–arranging the schedule their way.
By the way, this is just my thoughts. NASCAR is not worth as much as they say and only a TV Network needing content may bid out to $800 million but it is certainly not worth $1billion unless you include the tracks, and, voila, they are all in the same family. Smith has a more positive cash flow, would not be as dependent on a title sponsor, probably could create one through one of its subsidiaries. Remember, they considered purchasing the NHRA You package it up and pay royalities for 10 or so years to the France Family, name the championship the Bill France Trophy and all God’s children are happy.

You make a good case, but I hope you are wrong. Simply because the Smiths seem to love the cookie cutter tracks since their stable of tracks is full of them. One of the big problems this sport is facing is that that have too many cookie cutters on the schedule. I fear, if they have total control over the schedule, that we will get more of them and not less if they were to have full control of it all.

Front Row needs a driver who can improve the team. This guy certainly won’t.

Hemric is a childhood friend of Austin and Ty Dillon, they have remained friends since playing together as kids. That’s how Hemric got his RCR gig, not by winning anything. But grandpa may have to allow Fredo to race the three car, but he’s not about to allow Reddick get away.

Wonder when the shoe is going to drop on Brian Vickers wife. She was the number 2 procurer of little girls for Jeffrey Epstein and rich friends. Look it up.