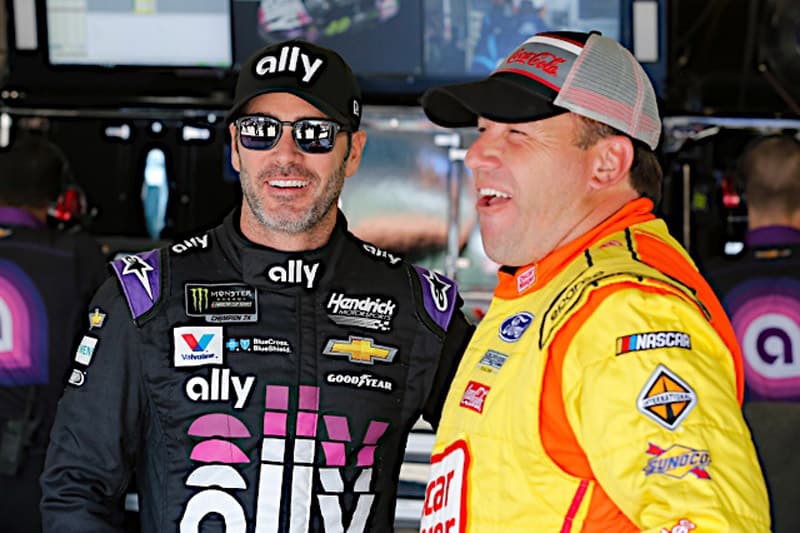 Did You Notice? … There’s a real battle to secure the final spot in the 2019 Monster Energy NASCAR Cup Series playoffs. Just two points separate Daniel Suarez and Clint Bowyer at the cutoff line in the season standings (16th). Ryan Newman, sitting 15th, is only a dozen points ahead of Suarez.

It’s the first time since 2014 the postseason grid might change over the final two races of the season. Bowyer knows all too well what that pressure is like; a crash at Atlanta on Labor Day weekend that year allowed Greg Biffle to knock him out of the playoffs. Will his veteran experience this time be enough to inch past Suarez?

Or will Jimmie Johnson pull off a miracle of his own? He’s the only other driver within striking distance, sitting 26 points behind Suarez. On the line is a 15-year streak of making every single version of NASCAR’s playoff format, also notching seven Cup championships along the way.

On paper, it feels like you can’t count Johnson out. He’s won seven career races combined at the final two regular season racetracks: Darlington Raceway and Indianapolis Motor Speedway. His organization, Hendrick Motorsports, has won as recently as this month with teammate Chase Elliott (Watkins Glen). Johnson’s three teammates are also safely in, allowing HMS to throw everything but the kitchen sink at the No. 48.

But history, unfortunately, is not on Johnson’s side. Only twice has a driver won one of the final two Cup races to secure his postseason spot. Jeremy Mayfield won the regular season finale at Richmond in 2004, setting a standard no one has ever matched. And Kasey Kahne, two years later, won at Auto Club Speedway Labor Day weekend while closing a 90-point gap on the top 10 to make the field.

Since a reasonably close version of the current point system was instituted, in 2011, drivers have snuck into the playoffs four times over the final two races. But none of them had a deficit as large as the one Johnson faces now.

Both Gordon and Busch were fighting for the final wild card spot under NASCAR’s old 12-driver playoff system. From 2011-13, the top 10 drivers in points qualified for the postseason along with two highest-placed race winners not already in the field.

Gordon, facing elimination, ended the year with two runner-up finishes to knock Busch out. The Joe Gibbs Racing driver would up just three points short after running 16th, a lap down, at the Richmond Raceway finale.

Who could forget the year of Spingate? That incident led to the then-unprecedented decision to add a 13th driver to the postseason field, Jeff Gordon. It’s hard to gauge, of course, the circumstances that let Gordon in the field while knocking Martin Truex Jr. out.

Understandably, Kurt Busch’s last-minute push to make the field flies under the radar. But Busch, driving for Furniture Row Racing at the time, closed with a fourth and a second-place finish to close a six-point gap on the top 10. He struggled in the postseason, winding up 10th, but did enough in the No. 78 to earn a multi-year contract with Stewart-Haas Racing.

This one was merely a matter of survival. Biffle ran 10th and 19th in the final two regular-season races but blew by Bowyer when he wrecked out at Atlanta. It marks the last time anyone has snuck into the postseason field this late in the year.

Can the pressure get to Bowyer again? Or Suarez? At least now there’s the benefit of stage points, bonuses that can earn Johnson up to 20 extra points over his rivals in one race. But that’s where the No. 48 team has given up its edge, earning just 53 points total (19th best in Cup) over 24 regular-season races. That’s 10 points less than Suarez and 32 less than Bowyer.

Johnson’s resume the past four years at the final two racetracks has also dropped off considerably. He has just one top-10 finish, a third at Indy in 2016, and hasn’t led a single lap at either one. The last time he won at either place was back in 2012.

But I feel you always give a seven-time Cup Series champion the benefit of the doubt. A crew chief change in August, nearly unprecedented for HMS and certainly for Johnson, was designed to jumpstart this team into the postseason field. Wrecks at Michigan International Raceway and Bristol Motor Speedway this month ruined what otherwise might have been top-10 efforts. There’s been more speed at the No. 48 during its good runs than at any time since Johnson’s last win in 2017.

So if anyone can pull off a miracle, it’s a guy who’s a first-ballot Hall of Famer. Just don’t get your hopes up as any type of postseason push is going to be a very tall order.

Did You Notice? … Dow no longer appears as a sponsorship partner on the Richard Childress Racing website? Dow’s Racing page has also been taken down, at least temporarily. It’s a quick turnaround considering RCR announced the company returning to the No. 3 Chevrolet for 2020 just a few short months ago.

We are happy to announce Dow will be back as a partner in 2020!

The team is insistent the company is signed through next season and will be back in February to sponsor Austin Dillon’s No. 3 Chevrolet.

RCR says Dow is re-signed for 2020. … The company is going through a transition with its strategies and the current plan is for the Dow logos to return in February. #nascar

But there’s reason to be skeptical here. Every year since signing on in 2013, Dow has sponsored at least 21 of Dillon’s 36 races. (At bare minimum, the initial deal announced years ago was for 16). This year, it’s been on the car for only 10, last sponsoring RCR at Chicagoland the end of June. Logos were removed from the hauler by July and there’s no plans, it seems, for it to reappear between now and the end of the year.

Add in Childress’ recent comments about Tyler Reddick, his NASCAR Xfinity Series driver, and the plot thickens further. He wants Reddick in a Cup car next season but needs sponsorship in order to expand. Rumors since then have swirled more around Reddick replacing Cup rookie Daniel Hemric than RCR expanding its fleet.

Sources also claim the organization may be considering discontinuing its Xfinity program in 2020. That would be a stunning turn of events for a team that had five full-time cars in the series as recently as two years ago.

It’s been a tough season for RCR on the Cup level this season; barring a last-minute Hail Mary win, none of its cars will come close to making the playoffs. There’s been some speed in qualifying but Dillon has as many poles (three) as top-10 finishes. The lone top-five result all season came from Hemric at Talladega this spring.

Could money be the culprit? We’re about to find out as Silly Season heats up considerably these next couple of weeks.

Did You Notice? … Some quick hits before taking off…

I will be glad when this speculation ends and Tom and these other writers (sic) can quit the endless speculating and fake drama of JJ “getting in”. I’m a JJ fan but also a realist. His day is over, he isn’t getting in. Find something else to write about Tom!

The chances of him making it have really lessened since Brian disappeared as well as the late event “cautions.” Even the other drivers were expecting them.

Wow what drama. There are four guys that had such a shitty season that they shouldn’t even be mentioned as championship contenders fighting for the last spot. I am so hoping Johnson doesn’t make it just so we don’t ever have to endure the media going on and on and on about how the streak will end. If he does manage to make it we will have to read the same tripe again next year. It was the same thing last year with the “at least one win per season” streak ending.

I’m expecting an announcement soon fro J-Jo that next year will be his last and be some kind of “Appreciation” tour with expectations to be feted at every event. And you thought this was sickening! And I can’t wait for Baby Busch’s. Maybe I can.

I nominate Matt DiBenedetto to drive the 48 car in 2020! lol

Well, SOMEBODY had to say it…

Great points about Dow and RCR. Obviously Austin is not preforming as expected. Maybe Grandpa needs to decide if the RCR stable is just there for the grand kids to play in or does he really want to be one of the big boys again? Interesting that Bob Levine caught so much crap for letting Matty D go to better his team yet RCR just keeps everything status quo.

I’m not a JJ fan but he would be a great story in the playoffs. Dream scenario, JJ gets in, JJ wins 8th, JJ retires,
Guido gets the ride.

Bill B
Reply to  timinchandler

You say you aren’t a JJ fan but it sure sounds like it. The only fans that want to see JJ get and 8th championship are JJ fans. I call BULLSHIT. Besides, he isn’t retiring this year,
A great story would be Guido winning at Bristol last week but that ship has sailed.

I’m so big a nascar fan