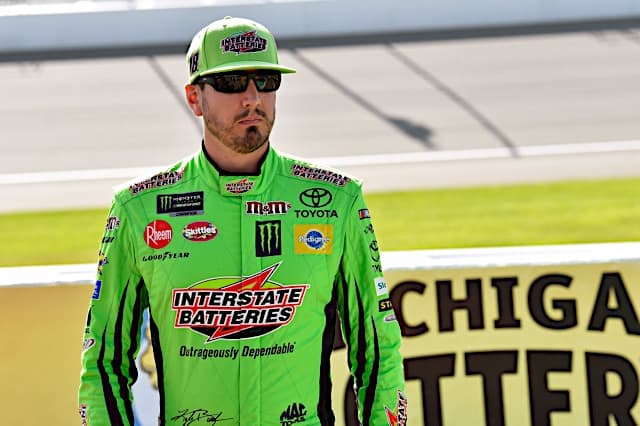 Kevin Harvick outlasted the competition on fuel mileage to claim the victory in the Consumers Energy 400 at Michigan International Speedway. Is Harvick all of a sudden heating up charged for another championship run?

On paper, Brad Keselowski may have had the best car at Michigan to grab a much-needed victory. Since Keselowski has not claimed a win in the last several outings, does the driver of the No. 2 have any playoff momentum?

Meanwhile, fellow Team Penske teammate Ryan Blaney was dealt a bad hand on fuel mileage after having a phenomenal race in the shadows of Detroit. Without a win since the Charlotte ROVAL last fall and quite a bit of bad luck since, does Blaney have any hope going into the playoffs?

The common question surrounding Sunday’s third-place finisher was “where did he come from?” While Kyle Larson‘s performance on the race track this summer has been sub-par, but can he continue to find luck and be a playoff dark horse?

Numerous questions await as NASCAR moves closer to the impending playoffs. There’s been a multitude of headlines circulating through the NASCAR community over the last several weeks, including the regular season points championship battle, the playoff bubble, and a potential seven-time champion on the outside looking in. With all of this jockeying for position, our Frontstretch experts were put to the ultimate test to pinpoint the 12 best competitors as the playoffs loom.

The drivers are then given points based on their ranking by our panelists, with first-place getting 12 points, and each subsequent driver getting one fewer point until the 12th-place driver, who gets a single point. Points are then added together, and the rankings are subsequently produced.

Guess what? Unlike Watkins Glen, Kyle Busch did not get mad at anyone. Wait, well he might have been mad at his Gander Outdoors Truck Series drivers on Saturday, though. With all the tempers behind him for the time being, Busch is locked in a tight battle with Joey Logano for the regular-season championship as NASCAR heads to one of Busch’s best and most successful tracks: Bristol Motor Speedway. Can he win this duel?

While Harvick might be the second driver on our rankings this week, Keelan Harvick might as just be number one in our hearts. Harvick may have won Michigan for the second consecutive year but Keelan stole the show for the second straight year. What a childhood Keelan must have: He does burnouts, he grabs checkered flags and he has a super cool father. Every seven-year-old in America must be jealous.

What a cool moment.

Keelan Harvick ran after his dad @KevinHarvick, after the @StewartHaasRcng driver won at @MISpeedway for the second year in a row. #KidsDriveNASCAR pic.twitter.com/jrLg6FAXJC

The best-dressed award at Michigan certainly went to Truex, who clearly didn’t realize it was a much more casual affair. Even though questionable fashion choices might be a circulating headline, Truex’s 500th career start wasn’t filled with fireworks on track, but instead had a gritty back to front charge to a respectable fourth-place result. Not bad.

Although he couldn’t maintain an impressive streak of top fives at Michigan, Hamlin has become one of the stoutest drivers over the last month. Watch out, he might be lurking in the weeds as an unexpected championship favorite.

Also, how can you not be in the company of his apparel sponsor, golf buddy and friend Michael Jordan and call himself a champion of a major sport?

Logano wished he had another gallon of gas at Michigan, but after learning he drove a 550-horsepower Ford Mustang with a whopping four miles per gallon, the gas must be extremely expensive. Also, on the heels of the MMA match at Watkins Glen between about 400 different competitors, conflict now surrounds Logano’s sponsor as Harvick took shots at Shell from victory lane. But wait, Logano shouldn’t worry. Harvick is only a foot-tall spokesman sitting on a shelf.

If a child refuses to sleep during nap time, are they guilty of resisting a rest?

I’m reading a book about anti-gravity. It’s impossible to put down!

What is the least spoken language in the world? Sign language.

Justice is a dish best served cold, if it were served warm it would be just water.

We all love dad jokes unless you’re Brad Keselowski’s family.

That look when you tell a dad joke in a girl filled household ??‍♂️?? pic.twitter.com/mCXadHnDhy

“Libraries, sleeping babies, Darrell Waltrip with laryngitis, a Toyota Prius, a tree falling in the woods when no one is around and Paul Menard‘s ‘vivacious’ demeanor are all louder than this competitor at Michigan.”

Correct Answer: “Who is Chase Elliott?”

While he may have been quiet, he snuck in a top 10 in at Michigan after a dominating race at the Glen.

Two teammates are running inside the top 10 with less than 30 laps to go.

Kurt Busch may have left Michigan frustrated after running out of Sunoco race fuel on the final lap, but the 41-year-old heads to the Bristol Night Race as the defending winner of the race and the defending loser of the best hair contest.

A little bit of alcohol will make everything better, at least if you are Jimmie Johnson and Ryan Blaney.

After talking over a couple of beers, Jimmie Johnson says he and Ryan Blaney are all good. pic.twitter.com/sIymvl1RPf

The entire 88 team rushed out of the theater before I could catch them crying too… admit it @Ives_Greg @TeamHendrick pic.twitter.com/owicUhRQWH

Kyle Larson may have had a spark of momentum, but with the impending playoffs approaching, he might just need all the golden horseshoes, rabbit’s feet, leprechauns, four-leaf clovers, wishbones and another trip with Jeff Gordon to the spiritual healing shop to become a champion this year. But hey, his last trip with Gordon worked out OK.

The Byron Bandit did not leave Michigan very optimistic, but the Last Great Colosseum awaits. Anything can happen.

Umm, where did Denny finsih at Michigan Sunday?? Might want to check that.