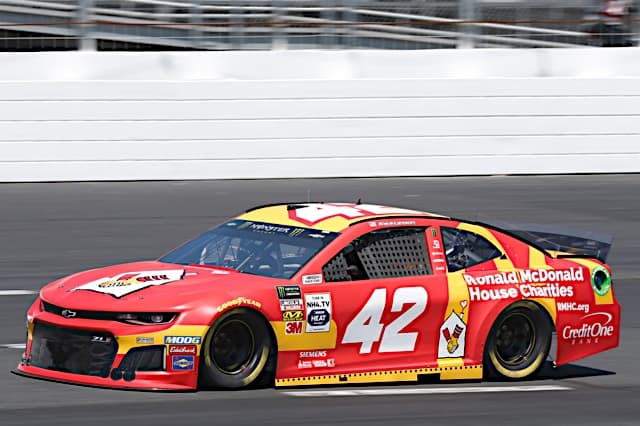 With 2019 NASCAR Silly Season in full effect, rumors heated up along with hot temperatures entering the weekend at New Hampshire Motor Speedway. But for now, all Monster Energy NASCAR Cup Series off-track news revolved around drivers insisting they’re sticking with their current teams for 2020.

Instead, by the end of Saturday (July 20), it was the on-track action taking center stage as multiple teams found themselves unpacking backup cars off the hauler.  Take a look at how the Cup Series weekend has unfolded heading into Sunday’s Foxwoods Resort Casino 301.

Larson “wrapped up” with Ganassi for 2020

With Kurt Busch‘s impressive first season with Chip Ganassi Racing, the rumor mill was working overtime for a winless Kyle Larson. Would he stay with Ganassi for 2020? Could Ross Chastain, Ganassi’s former NASCAR Xfinity Series driver, replace him?

But Larson put all of those rumors to rest on Friday during media availability at New Hampshire Motor Speedway.

“I am wrapped up. There has been no contract negotiations,” Larson said. “I am still [with CGR] through next year. I don’t know why all the contract stuff has been coming up. I think because people try to make things up.  Yeah, I don’t know. I am there, so not really sure what else to say.”

Larson currently sits 13th in the standings with three top fives and seven top 10s on the season. But his winless streak now sits at 65 races after helping push Busch to victory last weekend at Kentucky Speedway. The No. 42 team has been plagued with both inconsistency and bad luck, leading just 43 laps the last 17 races.

The rough luck continued this weekend as Larson will wind up heading to the rear of the field at NHMS. (More on that a little later).

For Alex Bowman, it’s been a nightmarish Cup Series weekend. His driveshaft broke in qualifying, forcing his crew to switch to a backup car and start fresh for Saturday’s two practice sessions.

Well dang, broken driveshaft destroyed the car on its way out. Have to go to a backup, an older car…. last ran:
?? pic.twitter.com/xETfEvj1Qr

The first practice went as advertised as Bowman felt out his car. He was 22nd on the speed charts after running 33 laps around NHMS.

But the second practice? A total disaster. The Arizona native backed his No. 88 Chevrolet into the fence, destroying his second car of the weekend. Since Hendrick Motorsports doesn’t have a third car on site, they will have to use Jimmie Johnson‘s backup No. 48 car for Bowman.

Bowman’s wreck actually produced the fourth backup for Hendrick Motorsports overall. William Byron wrecked in the first practice Saturday, forcing him to a backup with the No. 24 team.

Both Bowman and Byron will start Sunday’s race from the rear of the field.

Erik Jones “close” to resigning with JGR for 2020

With Christopher Bell waiting in the wings for a Cup ride and Martin Truex Jr., Kyle Busch and Denny Hamlin all signed through this season, the pressure remains on Erik Jones to perform at Joe Gibbs Racing. The Michigan-born driver is currently mired a winless drought of 37 races (Daytona, 2018) that has left critics questioning his future.

“We’ve had some good meetings, positive meetings, so we’re moving in the right direction,” Jones said during Friday afternoon’s qualifying session at New Hampshire Motor Speedway. “I’d love to get it done here soon. We’ve had good meetings between my guys and JGR. I’ve had good meetings with Coach talking about it and moving forward. I know I keep saying it, but I feel like we’re pretty close to getting it done.”

It’s a repeat of what Jones has said already, though as Bell waits patiently to see if owner Joe Gibbs will make a switch.

“I think we’re pretty close, I would say,” Jones said last month in Pocono. “Definitely farther along than we were a month or two ago. In good shape here right now.”

Jones will start from fourth position on Sunday, hoping the best way to close the deal is by putting his No. 20 Toyota in victory lane.

Throughout NASCAR’s 2019 season, wrecks in practice and qualifying have been rare. Occasionally, a team will pull out a backup car but most everyone enters race day fully intact.

But not this weekend at New Hampshire.

Six drivers will be starting from the rear on Sunday after a rare rash of trouble with the Magic Mile. It all started in first practice Friday as Ryan Newman tagged the wall and had to go to a backup. Moments later, Daytona 500 winner Denny Hamlin became the next victim after smashing up his Toyota.

.@RyanJNewman’s primary suffered too much rear end damage, so the backup being prepped now in the garage. pic.twitter.com/NuNK1pGYAv

The carnage continued Friday afternoon as Bowman broke his driveshaft in qualifying. Add Byron and Larson, who made contact with the wall Saturday morning, and it’s the longest list of backup cars we’ve seen in months.

What gives? The universal answer throughout the garage is these cars are tougher to handle than usual this weekend.

“We’ve just been really loose, and I tried to drive through it and see if it would come to me better, and it didn’t,” Byron said after his incident. “It was even looser yet, and that was kind of the story, just got loose. Hopefully, tomorrow we can have a good, solid day and go from there.”

Are these wrecks a foresight to tomorrow? Only time will tell. The NASCAR Xfinity Series race, won by Bell, was fairly clean but the Cup cars are a whole different animal.