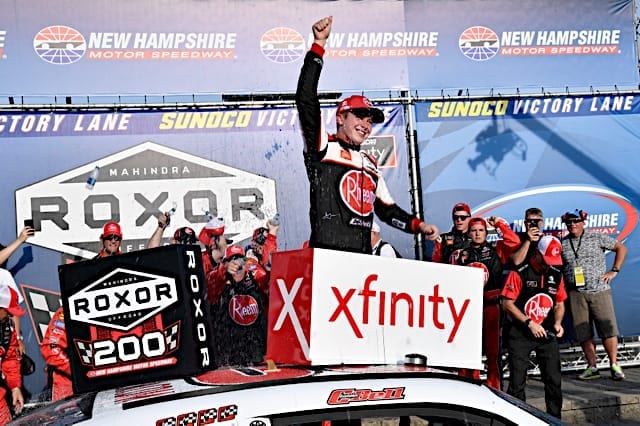 Frontstretch’s own Dustin Albino summed it up nicely.

The victory marked Bell’s fifth of the season. He now is tied with Cole Custer for the most wins in the series.

“I’m very thankful to drive these Supras for Joe Gibbs Racing… and Toyota Racing Development,” Bell said. “They provide really fast race cars and I’m the lucky guy who gets to drive them.”

While it is known he will drive for Joe Gibbs Racing next year, it is unknown in which series Bell will be competing. With more performances like his domination in the ROXOR 200, it will become increasingly hard for Joe Gibbs Racing to deny him a Cup Series ride next year. (Erik Jones, the driver most likely to make room for Bell at JGR, claimed he’s close to a contract extension this weekend.)

It was a relatively clean race with just five cautions, the first of which occurred on lap 33. Due to brake failure, John Hunter Nemechek backed his No. 23 GMS Racing Chevrolet into the wall, causing rear-end damage. The incident proved to be terminal as Nemechek finished in 36th place.

That yellow flag led to divided pit strategy, shuffling the running order. Some lead-lap drivers pitted whereas others stayed out, pushing Bell back in the pack. At the end of the first stage, Tyler Reddick dive-bombed Brandon Jones as track position left the two up front in clean air. The two raced side-by-side on the frontstretch, allowing Bell to nearly capture the stage win. Jones held on, one of a few select moments where Bell wasn’t putting a whipping on the field.

Wow!@BrandonJonesRac holds off a hard-charging @TylerReddick & @CBellRacing three-wide at the line to take #XfinitySeries stage one! pic.twitter.com/72vsJxYTsv

The second stage was caution free, allowing Bell to cruise to victory. It was his 11th stage win this season.

The final stage also saw Bell pull away with ease, although a few yellow flags littered the finish. Noah Gragson got out of the groove but he saved his car. Moments later, NASCAR threw the caution for apparent debris on lap 142. The restart tightened up the field and there was some aggressive driving as drivers battled for position.

In particular, Paul Menard and Harrison Burton raced each other hard. According to Menard, Burton hit him twice, leaving Menard out of patience. With less than 50 laps to go, he slammed into Burton, putting the No. 18 Joe Gibbs Racing Toyota hard into the outside wall.

Take a look at what happened between Paul Menard and @HBurtonRacing late in the final stage at @NHMS. pic.twitter.com/tO2OGkZQQz

Menard finished in fifth place whereas Burton’s race ended 31 laps early because of the damage (he finished 29th). After the ROXOR 200, the two drivers discussed the incident with a heated discussion on pit road.

Video: Harrison Burton goes to talk with Paul Menard on pit road after the race. pic.twitter.com/PzeNMVkaPF

“I voiced my displeasure. He’s a young kid,” Menard said. “I don’t know how old he is — 17, 18, he has got a long time in this sport. He has got to figure out this stuff pretty early as he races more in Xfinity and especially if he makes it in the Cup level, because they don’t put up with it.

“Some of these kids are really fun to race with and some of them just don’t get it, so I think you have to cut that sh*t out at an early age.”

Cole Custer beat Bell at Kentucky Speedway one race weekend ago; this time, Custer finished this race in second place. Rounding out the top-five finishers were Justin Allgaier, Tyler Reddick and Menard.

Since there were only five cautions, 31 of the 38 drivers completed the race. Bell laid down such a fast pace that only 16 of those drivers finished on the lead lap.

As for Bell, he now has the most stage wins along with the most playoff points (36). With eight races remaining until the postseason, Bell has nicely positioned himself for a deep run in the Xfinity Series championship chase.

If Christopher Bell is not somehow in Cup next season, something is severely wrong #NASCAR