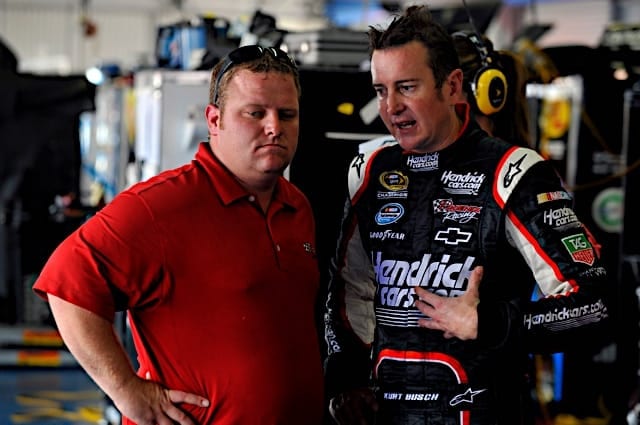 Kaulig Racing announced Sunday morning (July 21) that Nick Harrison, crew chief for Justin Haley on the No. 11 Chevrolet in the NASCAR Xfinity Series, has passed away. He was 37 years old.

No cause and time of death has been reported at this time. Harrison guided Haley to a 13th-place finish yesterday at New Hampshire Motor Speedway apparently without incident. The team then released a statement through Twitter Sunday morning revealing the tragic news.

Reactions have been pouring in from the NASCAR community to mourn a beloved friend, teammate and competitor. Frontstretch’s Davey Segal caught up with Landon Cassill, who worked with Harrison as his crew chief during the 2010-2011 NASCAR seasons, to get his thoughts on the tragedy.

“[Nick] always greeted me with a loud yell and a big hug. I saw him in Daytona a couple weeks ago, he had his swim trunks on, his shirt off in the lobby of the hotel, greeted me and my wife with a big sweaty hug. He was so special to me because we hadn’t worked together in the last 5-6 years. But every time he saw me he was so proud of me and so proud of whatever I was doing. It was always a pleasure to see him in the garage.”

Not just a crew chief, but a friend to everyone who knew him. I, and everyone at Kaulig Racing are devastated. He will be greatly missed. pic.twitter.com/bXvQF973DG

…….We will never understand why we are called home at the exact time that we are, but our good buddy Nick Harrison got that call last night. He never met a stranger, and would bring a smile to everyone’s face he was around. We love you man & you will be greatly missed ??

Ugh…. such a great dude!

Nick was an unbelievable person. We will all miss him. Love you brother.

So sorry to hear this. A great guy.

Harrison first crew chiefed in the then-NASCAR Busch Series for the No. 95 of Sadler Brothers Racing in 2006. He worked with Sterling Marlin’s son, Steadman, along with Chad Chaffin for the Tennessee-based program.

He then went on to call the shots atop the pit box in 120 Monster Energy NASCAR Cup Series races, many of them for James Finch’s No. 09/51 team. He worked for drivers such as Hall of Famers Bobby Labonte and Bill Elliott to Cassill and Brian Scott. Harrison also crew chiefed Kurt Busch in 2012 as he rehabbed his career with Finch after being released by Roger Penske.

We all lost a friend last night. We love you Nick Harrison. You were a leader, and a great friend to all.

Nick really helped me rebuild my career when I was at a low point. RIP pic.twitter.com/8t3TRVHuco

Harrison also crew chiefed 184 Xfinity Series events and had been working with Haley in 2019. They had collected 12 top-10 finishes together in 17 starts and sit ninth in the season standings.