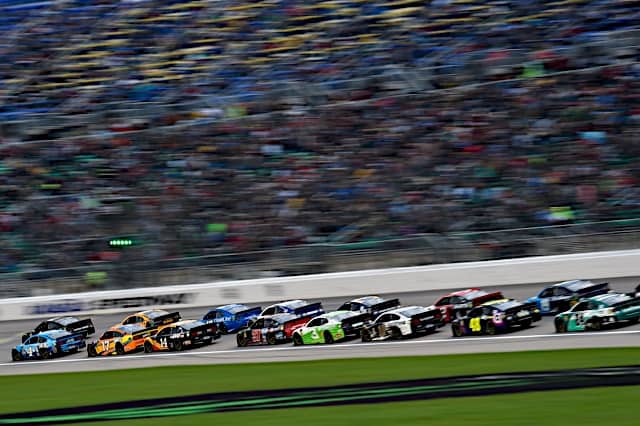 Last weekend was a difficult weather weekend for the midwest. Continual rain and a passing cold front made for cold, largely wet nights amid a month filled with near-constant moisture. For most people in the area, the weekend was a quiet one, spent largely indoors with hopes of sunlight and 80-degree days in the near future.

But mixed in with the cold, damp evenings was a sight seen a bit too infrequently this year — happy race fans.

The Monster Energy NASCAR Cup Series capped off a quick weekend that included a wet NTT IndyCar Series show in Indianapolis and a rare World of Outlaws sighting amid a rain-dominated spring in Ohio, wrapping up a two-day show at Kansas Speedway before heading home for the Mother’s Day holiday. The early end came as a welcome reprieve to teams after a chaotic week, with a rapid five-day turnaround as the Cup garage scrambled to prep for Kansas after a rain-delayed Monday race at Dover International Speedway.

In a different year, the stressful transition and unseasonably cool weather would have made for a difficult night in Kansas. But the conditions actually worked to NASCAR’s favor, providing a race that was visually closer and more unpredictable than any other outside of Daytona and Talladega this season.

As recently as last year, a cold night race would have been the worst-case scenario. But with the 2019 rules package, cool, grippy conditions proved beneficial to the racing product.

“Nighttime is the new daytime for NASCAR as far as the racing being better during the night,” Keselowski said after the race. “Because it gives you the grip to be able to take advantage of what this car or rules setup is designed for.”

On a 1.5-mile track that would typically yield disdain from the NASCAR faithful, the eventful final stage saw numerous comers and goes as drivers jockeyed for position. The field went four and even five-wide on restarts, threw intense blocks and battled for the lead through the closing stages of the race.

The close-quarters racing delivered excitement. Unpredictability in the closing laps made for an eventful run to the finish, with underdogs like Chris Buescher and Tyler Reddick running among contenders in the top 10. A late block from Erik Jones even added a touch of old-school rivalry and post-race flair from Clint Bowyer, with the Kansas native retaliating on the cool down lap after letting off the gas and dropping to a fifth-place finish.

Saturday’s race seemed to be a full look at what NASCAR envisioned when it first planned the draft-focused 2019 package. The eyeball test showed it, and drivers took notice.

“The package tonight was the closest iteration NASCAR is going to get to what I’m guessing they were shooting for,” Jones said afterward. “We were very close to wide open. There were definitely some pack racing moments after the restarts.”

Saturday’s race served as a sign that the sanctioning body can get the sort of racing it’s been after when the right conditions play out. There’s only one issue: the sort of conditions required to cause it are far from the norm.

The Digital Ally 400 was run on a track conducive to the racing NASCAR wanted amid unseasonably cool temperatures, particularly in the eventful final stage after the sun went down. Had the temperatures been warmer, as they were in the comparatively tame opening stages, the field may have been more spread out and unable to pass.

If low temps are necessary for such entertaining racing, it may not be seen again for as many as four months. With the summer stretch approaching, it’s unlikely that another race will reach the same temperatures as Saturday’s until late September or October. Kentucky Speedway will hold a night race in July, but the odds of it being 50 degrees or lower at that stage are minimal.

So all may not be well just yet. But for at least once week, the NASCAR faithful were treated to an exciting show and a largely positive reception on social media.

That has the sanctioning body sitting in a good place heading into the All-Star Race. A positive run of the event’s experimental package and a serviceable Coca-Cola 600 would go a long way toward keeping that positive morale around heading into the heat of the summer.