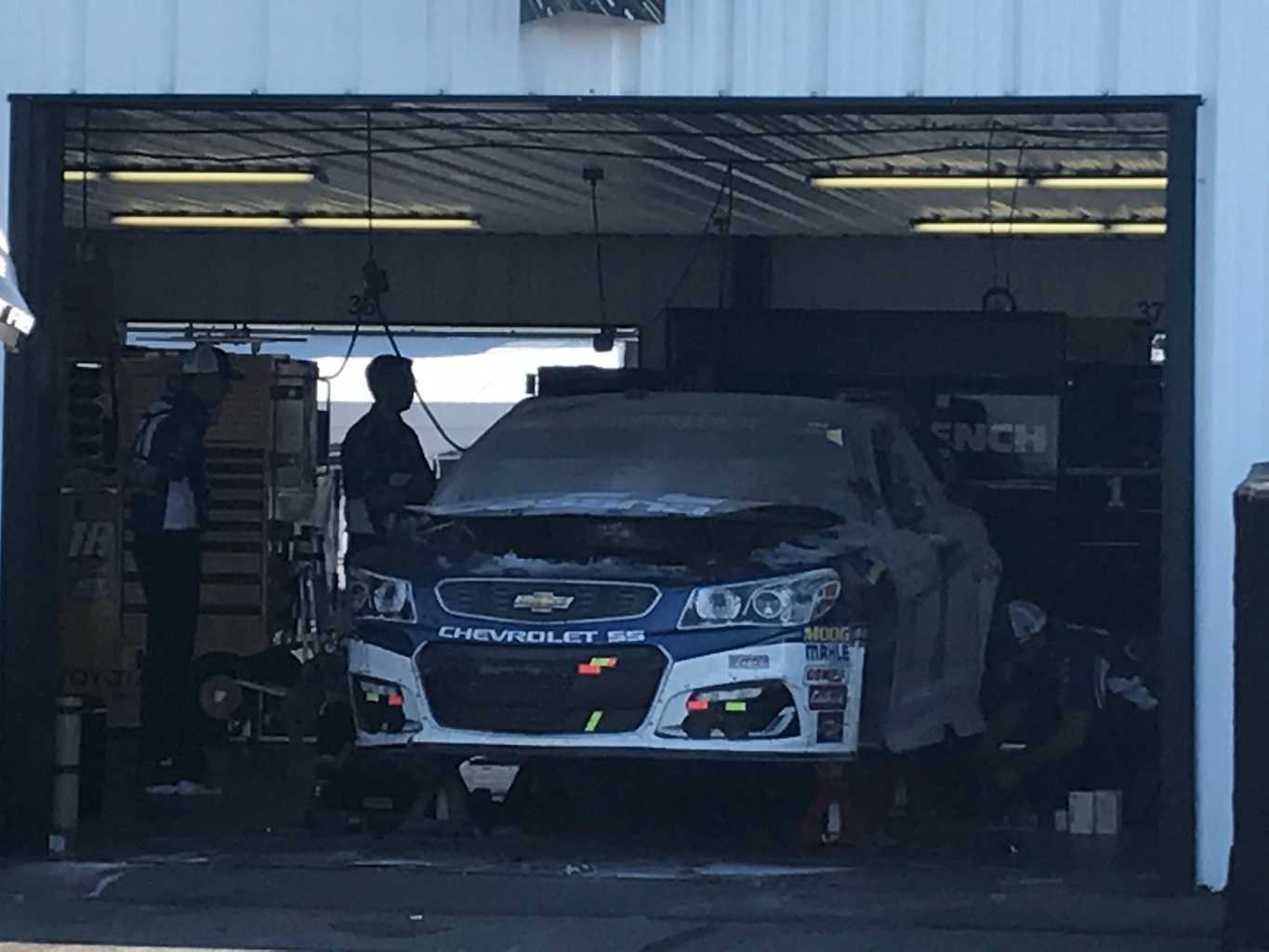 NASCAR nation breathed a sigh of relief when Darrell Wallace Jr. emerged unscathed from a scary Pocono wreck Sunday (July 29). But those gasps? They’re nothing new at a triangular-shaped track known for hard crashes.

In a different era, this race ended Bobby Allison’s career when the Hall-of-Famer blew a tire and slammed the wall, hit hard by Jocko Maggiacomo. Son Davey Allison then endured a horrific wreck in 1992 that forced him to use a relief driver for several weeks.

Through the years, dangerous flips and hard hits into both the outside and inside walls have involved everyone from Steve Park to Jeff Gordon to Elliott Sadler. On average, about once every two years we’re talking about a scary wreck at this triangular-shaped track with multiple pressure points. We’ve also seen a tragic incident that took the life of IndyCar driver Justin Wilson.

In NASCAR, entering Turn 1, the cars are running well over 200 mph before slamming on the brakes. Their speed at that point is higher than what they run at the restrictor plate tracks of Daytona International Speedway and Talladega Superspeedway when the Big One hits.

Then, there’s immediate, pedal-to-the-floor acceleration heading to the Tunnel Turn. The speed disparity of how the cars get off Turn 1 makes that a major passing point on the racetrack. But if the cars make contact there, it doesn’t seem like they ever slow down enough before slamming into the inside barrier to protect them from reaching the infield.

Pocono, to its credit, has made the necessary safety improvements. I’m not sure how you reduce the risk of these wrecks without tearing up the layout and starting over. All of these scary Turn 1 wrecks lately, from Wallace to Jimmie Johnson to Jamie McMurray, have not led to serious injury.

But the ferocity of these crashes still remains. At the very least, this track is tops on the list these days outside of Daytona and Talladega in terms of scary, often unavoidable crashes.

There have been rumors the track could go to a ROVAL-like format in future years to increase the quality of competition there. The way this track has succeeded in attracting fans in a tough environment and its constant push to improve it should be commended. But with the rate at which these wrecks occur, you wonder if a ROVAL-type changeover isn’t the worst idea. Even a recent repave at this track has not dramatically increased the quality of competition, and all it takes is one tragic NASCAR wreck to change the narrative.

Kevin Harvick, Kyle Busch and Martin Truex Jr. opened the door on Sunday. The first two started the race in the rear, failing post-qualifying inspection, while the No. 78 team had a rare off-day. A 15th-place finish for Truex ended a streak of five straight top-four results.

Early on, it looked like others could capitalize. Pit strategy put Kurt Busch out front for a time; Chase Elliott had one of his strongest cars of the season and won a stage. Daniel Suarez, taking the pole when others got sent backward, had the strongest race of his career.

Elliott and Suarez remained in position down the stretch when Harvick permanently took himself out of contention. Pit road contact with Aric Almirola left the No. 4 Ford with damage and Kyle Busch the only one standing in the way of hungry drivers. In fact, the final NASCAR Overtime restart featured four drivers inside the top seven who have never won a Cup race: Suarez, Elliott, Alex Bowman and rookie William Byron. All but Elliott needed a win to ensure their spot in the playoffs.

This finish is the time someone could have to stepped up. After a year of struggles, the sport’s next generation could have seized the moment and taken control. They were surrounding Busch like a pack of hungry wolves.

Except… nothing happened. Even with Busch ripe for the taking, complaining after the race his car never handled quite right, no one nailed that restart. No one bumped Busch the way Harvick knocked him out of the way at New Hampshire Motor Speedway. Instead, they watched in awe as the No. 18 drove away. Busch won easily yet again.

Considering the way this trio has dominated, that group might not get another chance the rest of the season. The young guns, as they have so often in 2018, squandered their opportunity to steal the show.

So many negative things get written about the sport these days that it’s important to still remember the good in this sport. Down the stretch, Busch was first, with a teammate who needed to make the playoffs, Suarez, directly behind him. Missing the postseason means millions in potential lost advertising revenue for sponsor ARRIS, and it lowers the stock of Suarez. Busch also, in theory, does not need additional playoff points and is cruising atop the Cup standings.

You know where I’m headed here. In Formula 1, where team orders rule you wonder if atop the pit box, they would have made Busch pull over. That didn’t happen. Along those same lines, contact between teammates at Stewart-Haas Racing (Harvick and Almirola) will lead to no internal punishment this week. The race was sorted out naturally, 40 racers fighting hard without any gimmes. Spingate from Richmond Raceway years ago remains a lone aberration of multi-team corroboration, not the start of a disturbing trend.

NASCAR multi-car teams may work together off the track, pooling their millions for wind tunnel time and testing information. But down the stretch, it’s still every man for himself, an important distinction that needs to remain that way in an individual sport.

Elliott, Bowman and Byron didn’t get the big trophy they wanted Sunday. But it’s clear Chevrolet’s longtime top organization is taking steps in the right direction. For a time, Jimmie Johnson joined them inside the top 10 until a late restart shuffle left him 17th.

Elliott has won two of the last five stages, equaling the total this manufacturer has won the entire season. (Austin Dillon won the final stage – the race – of February’s Daytona 500 and AJ Allmendinger won a stage at Sonoma Raceway). Even Kyle Larson, Chevy’s top driver for most of the season, has yet to earn a playoff point.

That’s important because Chevy is going nowhere without Hendrick figuring out its new Camaro. With three of its drivers in playoff position, it’s impossible to write the team off just yet. All it takes is sneaking into the Round of 8 and then winning a race at Martinsville Speedway, say, to throw this championship chase back into chaos.

How about that Iowa finish? Christopher Bell inched by Justin Allgaier with contact that left Allgaier steaming mad. Underdog Ross Chastain wound up fourth in a race that had side-by-side action and multiple on-track lead changes from start to finish.

The action comes one year after Ryan Preece stunned the NASCAR world with his .054-second victory over Kyle Benjamin. It’s the latest in a long list of Iowa classics that date all the way back to 2011 when Ricky Stenhouse Jr. got slammed across the line by Carl Edwards.

This track may not be selling out its stands, but it’s giving the type of action that deserves a Cup date. Will NASCAR take the chance in a few years when there’s finally some schedule flexibility again? The answer, especially considering the racing elsewhere, needs to be a resounding yes.

And what about Bell? The young driver inches into what’s been a weak Silly Season thus far with every win. Can Toyota afford to keep him down in XFINITY one more year? If it does, will another manufacturer clear a seat and make a move to poach him?

There may be no “team orders” per se, but there is still a modicum of team courtesy. The only driver who could have wrecked Kyle Busch to win (apparently your strategy of first choice) was Daniel Suarez and he figured it was not worth getting JGR’s top driver and mentor on his bad side. Erik Jones could have pushed Suarez to the front, but elected to make it three-wide to go for the win. The drivers behind the front row on the inside line were sitting ducks as the outside lane powered past them on every restart.

It’s easy to sit at your computer and call it “missed opportunities,” but closer evaluation shows it was just the way races inevitably turn out when track position and aero-push are the only real story. Busch spun his tires on the last restart, but the outside lane allowed him to run away from the competition.

How about a new rule that allows ALL the drivers in the odd-numbered restart positions to choose inside or outside lane, not just the leader?

most of the scary, hard wrecks that have occurred at Pocono in the recent past have been caused by the race teams using brake packages that are not really suitable for this track because they are trying to save weight.

Christopher Bell will be in a Toyota next year. My guess is Furniture Row (with help from Toyota) brings back the #77 like they did for Jones. Or (and I really hope this is does not happen) he could replace Martin Truex jr in the 78 since he’s a free agent. But I don’t see him leaving Furniture Row.