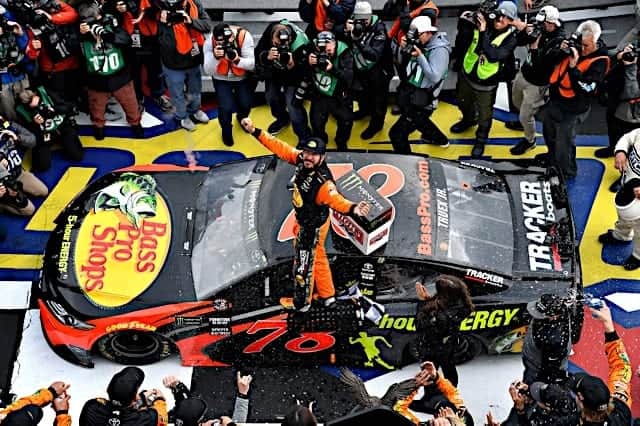 The Monster Energy NASCAR Cup Series traveled to the Tricky Triangle, Pocono Raceway, for the Pocono 400 on Sunday (June 3). As the series begins painting the picture for the summer, it’s doing the same for the playoffs. With 10 positions left, Pocono could’ve given the opportunity for someone to punch their ticket to the playoffs.

One problem: to win, a driver needs to defeat Martin Truex Jr., Kyle Busch and Kevin Harvick. Kyle Larson battled among those three drivers and established himself as a potential force to be reckoned with, along with Brad Keselowski, who finished Sunday’s race in fifth.

Here’s where we stand after Pocono.

Truex captured his second victory of 2018 on Sunday with a dominating performance at the Tricky Triangle. Truex had to battle with the likes of Harvick, Busch and Larson to do so, and the topic of the Championship 4 coming to fruition for the No. 78 will definitely be discussed in the coming months as we inch closer to the playoffs.

During the week leading up to the Coca-Cola 600, Truex had the opportunity to go to the White House and be honored by President Donald Trump for his 2017 championship victory. Likewise, before Pocono, Truex visited with New Jersey Governor Phil Murphy. The state also declared that May 31 was Martin Truex Jr. Day. Pretty big honors stemming from his 2017 championship, but now it’s time to focus on winning No. 2.

“I’m very proud to be from New Jersey and to be the first @NASCAR Cup Series Champion from the state is pretty awesome, as well. All that made today very special.” – @MartinTruex_Jr@GovMurphy & the NJ state legislature declared today @MartinTruex_Jr Day! pic.twitter.com/QUtlVotD3M

Is it any surprise that Busch finished inside the top three on Sunday? While he didn’t lead a lot of laps (the reason he fell from No. 1 to 2), he still kept his car in the battle and almost stole a Pocono victory; instead, Truex snatched the win from him.

Meanwhile, NASCAR encumbered his XFINITY Series victory Saturday due to a penalty, resulting in it meaning nothing except in statistics and the name on the trophy. He wasn’t exactly having it, defending himself and his team on Twitter after the race.

Roflmao!! What a joke. Too high?! That’s a disadvantage Incase any of u were wondering. ??‍♂️ https://t.co/hlC3vDRdgb

These first three drivers have become permanent fixtures on The 10 this season. Harvick had another fast car on Sunday, but it wasn’t enough to win him the race. When he got home, Stafford Speedway helped him get some points with wife DeLana by sending her a beautiful bouquet of flowers.

The track just wants Harvick in return for a night. Pretty sure that wouldn’t be too hard, right?

Larson stuck his nose into the Championship 4 picture on Sunday and came close to earning his first victory of 2018. Though the team still didn’t land a victory, Michigan International Speedway is this weekend, and you can’t write off Larson at the track he’s dominated at since 2015.

The driver of the No. 42 also wants you to decide on his NASCAR throwback paint scheme for September’s annual throwback weekend at Darlington Raceway. Hit the link below and give him your two cents. Who knows, your idea may come to life.

Hey FANS! I want to see what you got for #NASCARThrowback ideas for the #BojanglesSo500. Share your best old school ideas for the @DCSolar Chevy using #TeamLarson by Monday, June 11th at midnight. Make sure to include a photo of the original car! Don’t let me down. ? pic.twitter.com/Zfi0KNi0uP

Ryan Blaney earned his second pole of 2018 on Friday (June 1) and seemed to have the speed to repeat his performance from last season. The driver of the No. 12 has been very impressive this season, and the only problem he has — and this is true of the entire Team Penske organization — is that he can’t close the deal, which has to be pretty frustrating. But the team will fix it in no time.

Solid effort by our @Menards group today. Good to get back on track. In other news, Dads race got rained out early this morning so he and Mom drove from Sharon to Pocono and got there right before I was strapping in. Pretty awesome. pic.twitter.com/DBn00h92tf

Clint Bowyer showed a ton of speed last August behind the wheel of the Nature’s Bakery machine at Pocono, and on Sunday, that momentum maintained into this race. Bowyer was up front… er, at least I think it was Bowyer (Harvick and Bowyer had identical schemes this weekend). Missing a shift on that last restart killed the day for the team, but with a victory in the bag, things like that don’t sting as much.

Sick to my stomach. Let my team down today. Had a fast car and completely blew it. Missed a shift on last restart and ruined our day.

Two straight subpar races have hurt Joey Logano in The 10. The new gasman didn’t get the car fully filled during the first stop, and the team could never really rebound from the penalty it got for pitting while the pits were closed.

Michigan is next for the No. 22 team and things should be heading in the right direction being as Logano was the last to win at MIS before Larson’s recent string of dominance.

Another great weekend for the No. 48 team has me thinking that the old Jimmie Johnson is back. Had he ever left? Or was it just the new notebook with the Chevrolet Camaro ZL1? Johnson is starting to build up momentum, and I wouldn’t put it past him snapping the longest drought of his career very soon.

We are inching forward week after week. Still a long way to go and it’s going to take more from everyone @TeamHendrick. The great news is, I know we are all up for the challenge.?

Kurt Busch needs to start stepping it up because his teammates have been pulling further and further away from him. Don’t count out Busch, though, because it seems like ever since he joined Stewart-Haas Racing in 2014, he’s had a string of bad luck and then a victory that pushes him into the playoffs.

The Chicago Cubs fan was in the house at the New York Mets-Chicago Cubs game on June 2 at Citi Field. The Cubs ended up winning that game 7-1; something makes it hard to believe he kept that Mets jersey on for long.

When he said the Fords were gonna get a drubbing last year, did he mean the entire Blue Oval group or just Team Penske? Asking for a friend.

Keselowski has had to fight for every good finish he’s had this season, and Sunday was no different. The No. 2 team is starting to make gains but is still far off from competing with the Harvick-Truex-Busch-Larson four-way.

He tweeted on Tuesday about sports teams visiting the White House after President Trump canceled the Philadelphia Eagles visit.

As a champion who has been honored by a sitting us president I humbly disagree. Despite pressure from a conservative fan base against a liberal president we went anyway because we respected the grace of the offer.

Its an honor regardless of personal politics that I cherish ?? https://t.co/6KUUUDS7VK