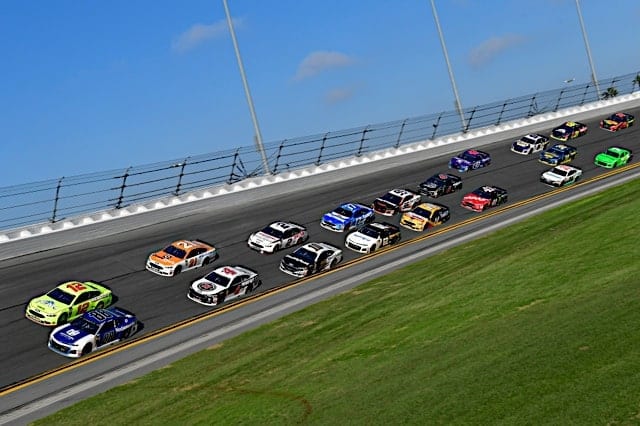 Congratulations on your acquisition.  You have an exciting time in store for you, and I wish you the best of luck in your new endeavor.

Your position is somewhat unenviable; our sport has come to a crossroads in recent years.  It’s grown exponentially, changed immensely and fallen on hard times.  But the hard times are still better than some racing series even hope for, and there are loyal fans who will continue to watch cars go round and round for as long as you put those cars on the racetrack.

There are also those who will complain no matter what you do; try to be patient with them, because it comes from the right place.

Let’s talk about those race fans—there are a few things you should know.  Some of them have been fans for years.  They loved the sport—your sport—long before it was the cool thing to talk about at the water cooler.  Somewhere inside, they want to love it still.  It grabs them by the very threads of their hearts, sends them soaring every single time the green flag flies.  It’s part of who and what they are.

But those fans often feel unwanted in today’s NASCAR.  There have been so many changes in the last 15 to 20 years, and many of them were very much unwanted by those longtime fans. They felt abandoned, ignored, tossed aside in favor of the swell of newer fans.  As the powers that be seemed to cater to a generation of fans who jumped on a bandwagon that most weren’t going to stay on, these longtime fans watched in sadness as the sport they knew was filled with gimmicks and tricks meant to entertain a generation that requires constant stimulation and doesn’t have the deep love and appreciation for the automobile that previous generations had. These fans had given NASCAR their passion and loyalty, only to have it thrown back at them casually, and it stings.  Take care of them, because they still care about you.

Some fans jumped on that bandwagon and stayed.  They often don’t understand the sport’s roots, but they also love to watch cars go around in circles. And yes, sometimes they want to guide the sport toward their world, looking for instant gratification and entertainment at every turn. They might not have seen a full-season champion in action or experienced watching the great drivers of days long gone.  Sometimes they don’t understand why the longtime fans still care about that.

The truth is, NASCAR needs both kinds of fans, and it’s your job to find a way to make the old fans feel wanted again—truly wanted, and heard—and to make the newer ones feel like you aren’t going backward or, maybe worse, standing still.

Keep in mind that fans rarely come across a sport, any sport, watch it on television a couple of times and stick with it for the long haul.  Passion is passed from one generation to the next, so make sure the sport is an experience fans will never forget.  Encourage interaction between drivers and fans, especially young fans, because they’ll never forget meeting their heroes.  Make it affordable for families to come to races and experience it all.

We all know you can’t fix the issues with the cars overnight, and fans will be patient as long as you’re making an effort.  In the meantime, make sure the tracks you go to provide the best racing.  Look to short tracks and road courses for future endeavors, and leave the tracks the fans call cookie-cutters behind.  Don’t worry; other sports went through that one-size-fits-all stage and came out of it fine, with beautiful new venues to carry on the sport’s good name.  You can do that, too, in time.

A lot of fans don’t get to go to a lot of races in person, so make sure that your television deals are going to bring the sport to them in the best possible way.  While watching a few races on television might not make an instant fan, if they see a race where the action is shown on track and feel like they know all the drivers, you’re well on the way to hooking them on the sport.

When the boom began, fans really felt like they knew the drivers.  Personalities were highlighted on many media platforms, and more importantly, drivers were accessible.  That has changed somewhat, and it’s your challenge to bring it back.  You see, racing was, and is, a community.  Fans are the backbone of that community, but we’re all in it together—you, the teams, the drivers, the media as well as the fans.  That’s what makes NASCAR so special, and it can only grow with the right seeds.

Treat the race teams well, too.  It’s their business and their livelihood, but also their passion.  Help the small teams find a way to grow into big ones with time and effort. If new teams are to enter the game, they need to see a clear path of growth.  They put too much into what they do to toil at the back end of the garage year after year.

Make events that are about the teams truly about them.  Ask them where they want the all-star event and season-ending banquet.  Let them be heard.  Keep the schedule manageable for them; they are away from their families a lot.  From crewmen to drivers, they’re vital to your success, but you’re also vital to theirs, and they need an ally in their corner.

It’s also your responsibility to keep them safe.  Please take that responsibility seriously.  Never stop looking for new ways to keep them safer. Many of the newer fans have never has to experience the awful, numbing tragedy that still lurks in dark corners.  I hope they never have to. We all know it’s a risky sport and all you can do is your best.  The cost of this sport can be extremely high, but we can all hope nobody collects on your watch.

At the end of the day, you’ve got a heck of a responsibility, but also a really great opportunity to move the sport forward while keeping the past close at hand.  Fans will stand by you if they think you care about them, so take your time and do right by them.  You hold the passion of every fan, crewman, team owner and driver in the palm of your hand.  If that’s not a powerful thing, I don’t know what is.  Understand that every one of those people has given NASCAR his or her all.  Please give them yours in return.

While I agree with you. NASCAR I feel has gone overboard with the fan access. Yes, they pay..but it is the drivers “work”. My sister in law one could say is someone at one time, “here she comes, everybody hide” Lock up your drivers!!!! Funny stories, funny pics. Kevin Harvick I think still is saying WTF. If he saw her pic, he would have a A-HA moment. LOL Anywho! Good article.

Who ever buy NASCAR should just ask “what would Brian do?” and then do the opposite. If they follow that rule things will be just fine.

“Look to short tracks and road courses for future endeavors, and leave the tracks the fans call cookie-cutters behind” and “make sure that your television deals are going to bring the sport to them in the best possible way” would fix a great deal of nascraps ills.

If someone does “buy” NASCAR someday, the biggest issue will be the upcoming TV negotiations. That could make or break this sport for decades to come….

Dollars to doughnuts that, if indeed a deal happens, its a media company.

I think if someone does buy NASCAR, it will be an investment firm, looking to make some quick money, then dump the whole thing. Unfortunate for the teams, and the fans.