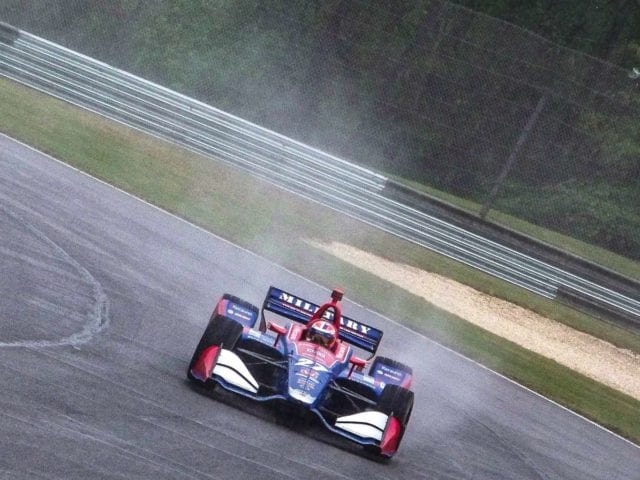 This past weekend, I had the opportunity to cover the Verizon IndyCar Series in Birmingham, Alabama. For roughly 13 years, I have attended and covered only NASCAR racing so it was certainly a different experience.

Then along came Mother Nature to intervene. She added an extra level of unfamiliar territory I had never seen before, at least in person.

When it comes to rain and stock car racing, it rarely ever mixes well. I have seen races be completely washed out and pushed to the following day. I have also seen races where Mother Nature shows her face during the event. The stock cars always lose in that scenario, forcing me to spend very late nights at the racetrack. So when Mother Nature intervened in Alabama, putting the race under wet conditions, questions began brewing in my mind.

Unlike in NASCAR, the race would go green. IndyCars would run around this circuit running rain tires and attempt to go full speed.

Seeing racing in the rain was definitely different than what I have become accustomed to over my 13-year tenure around motorsports. You can clearly see how much of a struggle it would be to drive around the 17-turn road course with water splashing up directly into your face. Keep in mind that’s happening with only a small, thin piece of plastic between the raindrops and your eyes.

Imagine driving down the interstate behind an 18-wheeler on a day where a heavy rain has landed a thick layer of water on the surface. That truck is going to let out a tail and you have to speed up your windshield wipers to make things clearer. The thing is, these drivers don’t have windshields nor windshield wipers. In most cases, they have just a simple tear-off to clear the drops and those don’t always work either.

Graham Rahal, Scott Dixon and many other drivers had issues with theirs on Sunday. I could see where that could be just outright frustrating, especially if you are going full speed.

Seeing these drivers compete under those conditions was definitely an eye-opening experience. It brings a new level of appreciation of what they do to put on a show for the fans.

I asked Alexander Rossi, during a press conference that was held once the race was called, about the differences between competing in wet versus dry conditions.

“I think it’s very different,” said Rossi. “The driving talent kind of works. I mean, if you are quick in the dry, odds are it can translate over into the wet. What changes is the car setup kind of doesn’t matter as much. So when we’re in the dry, a tenth of a second to two-tenths of a second can really degrade from the car setup. As for with the wet, I am sure there was a lot of very different setups out there. It becomes more of a driver-oriented result in a way.”

A few of the NASCAR series have raced in the rain before on road courses but I have never personally witnessed it in person. The difference between seeing rain racing on television versus being there is like the difference in night and day. And the way in which these cars were able to whip around the track was clearly more breathtaking than previous NASCAR XFINITY Series attempts to do so.

IndyCar had the best of both worlds on Monday with Mother Nature letting up in the end. But the biggest challenge happened Sunday when drivers were transitioning from dry to wet conditions. It was truly a special experience, both for this journalist and the fans in attendance at Barber.

Having both raced in the rain and spectated its indeed a different world. One in which talent more than the car takes over. Perhaps one day we will see nascar do it at the top level even if only on the road courses.

This is kind of innocently naive piece. Virtually the entire racing world both two and four wheel race on wet courses. This is new news and needs to be explained? I am a race fan and watch all types of racing including NASCAR. But, there is a whole world beyond turning circles on dry asphalt.