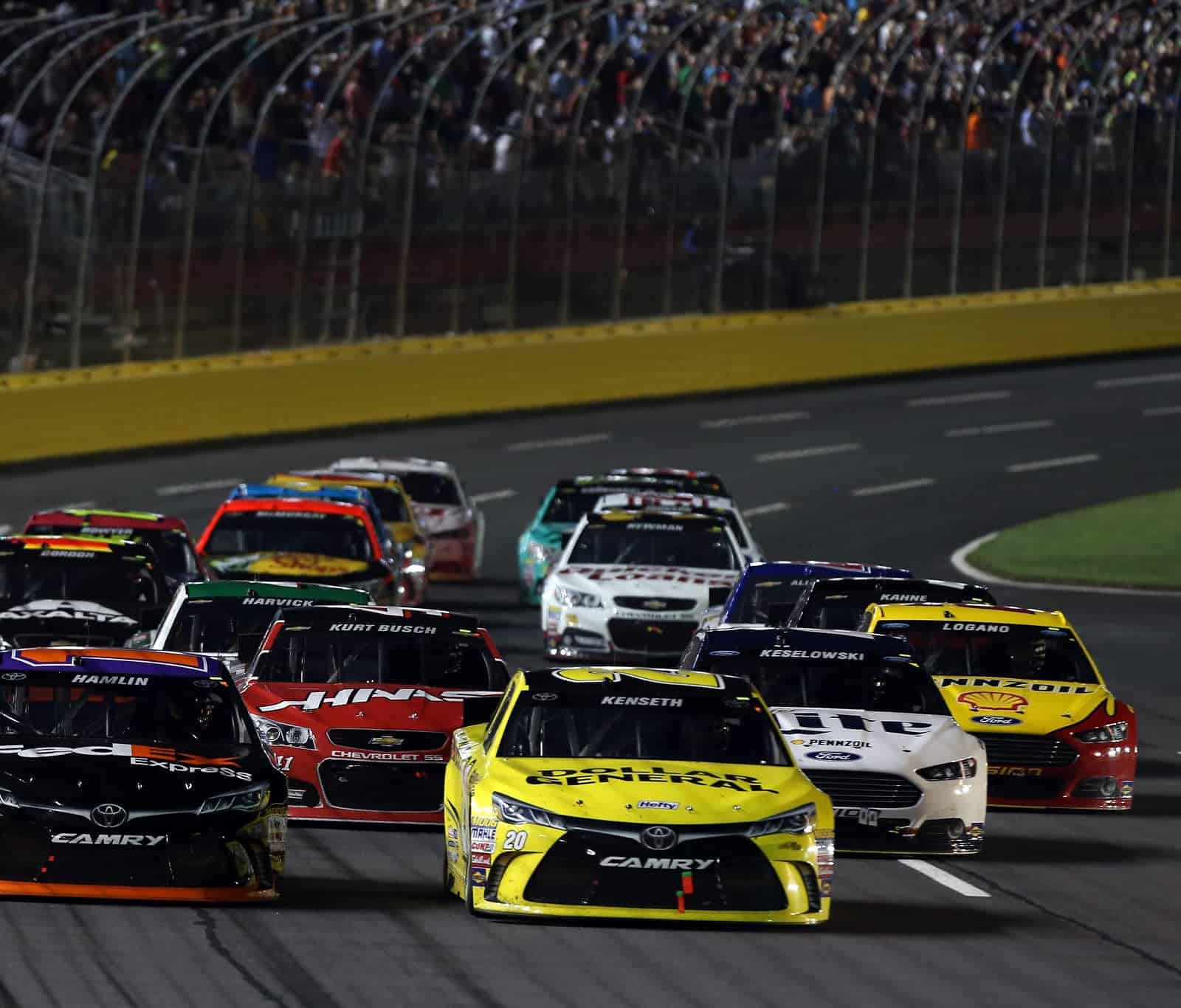 So, this All-Star Race.

NASCAR released the format for its All-Star event next month, and well, color me a bit underwhelmed. Two things went down: a change to the rules package for the cars and another to the format of the race itself.

Let’s talk about the cars first.  NASCAR is adding a significantly taller spoiler with “ears” on the ends, aero ducts, a circa 2014 splitter…and a restrictor plate. It’s the plate that has fans apprehensive, and frankly, they have a right to be.  Anyone who’s been around long enough remembers the time they tried them at a track in the Cup Series that wasn’t Daytona or Talladega and it didn’t go too well.  (I was at that race, and it was as ugly as everyone remembers.)

But that was almost 20 years ago, and that was Loudon, a flat, one-mile oval, and the plates were a band-aid after a pair of deaths at the track that season and a rash of stuck throttles that could have been tragic for others.  Charlotte is a high-banked mile and a half, and it’s unfair to expect the same result.

That’s not saying we won’t see the same result; we simply don’t have much to go on here.  The XFINITY Series ran a similar package at Indianapolis last year and it got decent reviews from fans and competitors, so maybe it’s worth a shot.  With all the complaints about the racing on the 1.5-mile tracks, NASCAR isn’t wrong to try something in a race that doesn’t count and see if it sticks.  If it doesn’t, no harm, no foul.  But what if it works to keep the racing closer and make passing not so close to impossible?

Is it a perfect solution?  Probably not, but what is?  The cars fans want today are long gone, and that includes the street versions. Even if NASCAR went back to full stock bodies (last time the race and street bodies had to fit the same templates was the mid-1990s), there would still be a lot more aero-dependence in play than there was 25 years ago.  So the package is worth a try.

I was actually less impressed by the race format than NASCAR making an attempt, albeit a Hail Mary, to improve the cars.

The Open features three stages, with the winner of each transferring to the show, and the All-Star race has four, with the first three being 20 laps and the final one being 10 for all the marbles.

And that’s it…basically, it’s a regular race, but shorter.  The cautions between stages will play just like they do now, with no mandatory pit stops.  It seems a little anti-climactic.

It sounds a bit contradictory, coming from my pen, because I’ve always been critical of gimmicks in racing.  But truth be told, I’ve always kind of liked them in the All-Star event.

Things like those high-pressure pit stops, eliminations, or inversions have, over the years, added an element of something different to the event that wouldn’t fly in a points race.  This race is supposed to be fun, different from the points events where teams have to make every position count.  And now it’s running just like them.

The pit crew challenge is a thing of the past.  The live stops during qualifying (assuming that still happens this year) put a lot of onus on the crews and put them in the spotlight, but there’s a lot of pressure on them also.  The challenge had some race implications but was a more laid-back event.  They even held a media competition at which the real teams I’m sure had a good laugh.  For the record, I’m a lousy tire changer.

That event should come back.  And so should the gimmicks, in all their glory.  Not the average finish thing; nobody wants to do math on a Saturday night.  But a mandatory stop here, an inversion there (remember the wheel they spun to figure out how many cars to invert?  Get it off the mothballs).  Make it seem like an old-school All-Star event.

One more thing I’d like to see is the inclusion of the XFINTIY and Truck Series champions included if a team is willing to provide a car—they have experience on the Charlotte oval, so why not let them try their mettle against the Cup heavy hitters?  Surely they’re as qualified as Cup drivers who won the All-Star event several years ago but didn’t win in the last year or two.

OK, two more things, because this one: NASCAR needs to bring back the rule they used to have that allowed for a driver changing teams between seasons and included both the driver with his current team and his former team with a new driver, because the teams plays a huge rile in why the driver qualified and have little choice in him moving on…they should not be punished.  This year, it would make the No. 20 eligible with Erik Jones, as the team won at Phoenix last fall with Matt Kenseth.

As for moving the race…I’d like to see it rotate among Charlotte, Bristol and Martinsville but no further away because that’s asking a lot of teams for a non-points event—unless the teams want to travel farther afield.  And if they don’t want to travel at all?  Then keep it in Charlotte and let them have some fun, because the teams are who it’s about.

The All-Star event is one that has been a lot of fun for fans while showcasing the best teams in the sport. The current format largely falls flat because it’s basically just another race. NASCAR is making an effort to make the cars more exciting, but the race is just a race, and it should be a spectacle.

I love the idea of the pit stop competition coming back…at a real track with REAL stops. seems the perfect addition to the All Star weekend. But it has to be the real deal, not pushing a car by hand in an arena indoors.

Bill B
Reply to  salb

I kind of thought it was cool when they did pit stops during qualifying (3 laps) with no speed limit on pit road. That was fun to watch and really cool seeing who could nail it and who went over the line (literally).

I love the idea of including Xfinity and Truck champions. I think it would be great to include all the Xfinity and truck winners. Let them find a ride and give it all they’ve got. They would have more to prove than the cup drivers and some of the big teams would probably like the opportunity to compete.

There you go NASCAR – make it a true NASCAR All Star race by including all the stars!

There’s no reason they can’t run now, they just have to find a ride. And that’s the real problem. Nascar isn’t going to go around buying rides for drivers.

Can’t disagree with anything the author said. However, something Nascar hasn’t done and should do it get the damn splitter off the track. It would lessen the aero dependencies and force teams to make more mechanical grip. What they are doing with the no ride height rule is exactly the opposite of what they should be doing and sticks the splitter to the track even more. That is a big reason why the racing is so lousy, a tiny bit of aero makes a huge difference and often leads to a runaway win and a boring race.

The All-Star race is a waste of a weekend of racing. Unlike other sports with All-Star events, NASCAR has the same drivers competing in the All-Star race as in every other race of the season, with the exception of a few back-markers who don’t belong at the Cup level anyway. And the addition of the restrictor plates means this will be a demo derby of vast proportions. The hokey format and experimental aero package make this event an exercise in futility. NASCAR’s decline started with the introduction of the restrictor plate at Dega and Daytona, which gives the illusion of good racing, but too often results in hacks like Stenhouse and Dillon winning races they don’t deserve. If it weren’t for sponsor obligations, a driver would be smart just to sit this one out and go to the beach.

Amen, amen. The ASR clogs up a weekend on the schedule where a track saddled with a bad weather date for a real race could have one with more favorable conditions.

Frankly, the ship has sailed on All-Star events in pretty much every sport.

Move the event to Richmond and put the drivers in Modifieds or SlLMs. Give them a chance in real race cars and not Brian’s bumper cars. Make it a real Saturday night show.

Let me get this straight. They want me to drive about nine hours and over 425 miles to see if they created good racing. Yeah right. For over ten years now we have witnessed attempts to create good racing. And what has it accomplished? Empty seats and lower tv ratings. Yet they won’t give up. May as well throw a caution every twenty laps to keep it close. The one to two laps coming off of a caution are the only exciting parts of a race anymore.