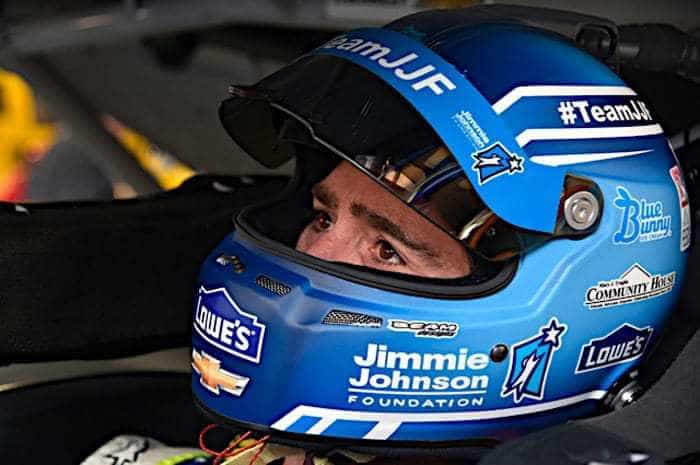 It’s hard to ignore the grey in the beard or the lines around the eyes these days.  No longer a kid, but several years older and seven times wiser, Jimmie Johnson looks through the eyes of a champion.

But these days, the worry lines are a bit deeper, the eyes not laughing like they sometimes do. Johnson and the No. 48 team have always struggled in the heat of summer, but they’ve always righted the ship at the perfect time, usually just in time to take another title.

This time feels different, though.

Speed has been elusive all summer, not only for Johnson, but for his three Hendrick Motorsports teammates as well.  Kasey Kahne’s victory at the Brickyard 400 seems more like a very lucky day than one typical of NASCAR’s most formidable team.

Johnson has three wins at Darlington Raceway; he knows how to dance with the Lady In Black, but this time, he and his team can’t seem to find the certain something that’s always made Johnson a threat.  They’re mediocre in practice sessions and miss the third round of qualifying.

Crew chief Chad Knaus, super genius, throws a big adjustment at the car the first chance he gets in the race.  The car doesn’t respond. “Nothing we do is having a positive effect,” Knaus laments on the radio. Johnson is uncharacteristically quiet on the radio.  He’s usually talkative, describing in detail what the car is doing.  This night, he seems almost at a loss.

Knaus tells Johnson to lower the track bar; all that does is make the car slower.  It doesn’t correct the handling issues. Knaus tells him to drop it more in an attempt to get ahead of the track; that only slows the car further and Johnson falls from the top 10 to 15th or so.

“It’s so loose I can’t drive it,” Johnson said, who likes his cars on the loose side. This loose, though, is bad. “I don’t know why,” Johnson tells Knaus.  “I just keep chasing it.”

Johnson’s summer woes are well documented and generally not of concern to the driver or his fans.  His team has mastered the playoff format, no matter which form it’s taken, so it’s been widely speculated that once he’s assured a spot (Johnson is the only driver to never miss a playoff spot since the postseason format was adopted in 2004) that he and the team simply enter test mode, trying different engines and setups so they’ll mow through the final 10 races. Seven times, that’s worked out.

This year, though, feels different.  Johnson and his team sound genuinely confused as the Southern 500 grinds on. Knaus loses his cool a little when another car impedes Johnson getting into his pit. Johnson questions why he’s racing with the No. 34 car of Landon Cassill inside the top 15 after Cassill uses pit strategy to his advantage.  Knaus tells him that but adds, “We’ve been racing him all day, buddy.”

As the laps wind down, frustration rises. Johnson says he can’t drive the car and doesn’t know why.  Knaus tells him to pit with a few obscenities thrown in for good measure, and only gets more heated when Johnson can’t make pit road that lap.  Before he gets another shot, Johnson loses a tire.  He makes it into the pits without spinning, but with 20 laps remaining, he complains the car is overheating.  He’s told to cruise it to the end, which he does, finishing 12th.

12th isn’t a terrible finish, but this is a team that’s made a reputation for making silk purses out of sows’ ears, overcoming anything thrown at them.  This year, that’s not happening.

Will that change in the playoffs?  That’s the million-dollar question for Johnson. It usually has before. The third race in at Dover International Speedway, where Johnson has had phenomenal success to the tune of 11 wins. If he can turn things around anywhere, it’ll be there.

Johnson has the eyes and the wisdom of a champion.  But will his steely gaze and experience behind the wheel be enough?  This time, there are no answers for Johnson, only questions as he makes a bid to become the first driver to eight championships.

I can’t feel sorry for this team. I believe they are once again playing games and once the 10 race nonsense starts all will suddenly be “wonderful” for the 48 team.

Absolutely. Never ever question the “Chad and Jimmie Show”. They’re just lying in the grass waiting to pounce and Dover is the place to do it. Win Dover and everyone else starts sweating. ?

What you don’t hear on the radio…

“Yep. Those parts will work. We’ll use them again.”

“Those new parts are about the same as the other ones. We’ll stick with the old ones.”

“When’s the first race that counts?”

Sorry but JJ days of being “the guy to beat” are over. He was handed the championship last year. He fell back during the race, got saved from going a lap down by a questionable caution timed just right, and then won by default when Logano, Edwards and Busch all had issues on those last restarts (which were all the result of another questionable caution). I won’t ever write him off because he seems to be able to capitalize on opportunities when the present themselves, but he isn’t leading laps, racking up top 5/10 finishes or qualifying well.

Bill, Johnson doesn’t need to lead laps, rack up top 5/10 finishes or qualify well to when another championship. What he needs to do and does is what you said “capitalize on opportunities when presented”. There is no one who does that better then Johnson and the 48 team. I agree he backed into it last year but he’s still the “Champ”. Believe me Bill I don’t want to see him get #8 but then I didn’t want to see him get #7 either.