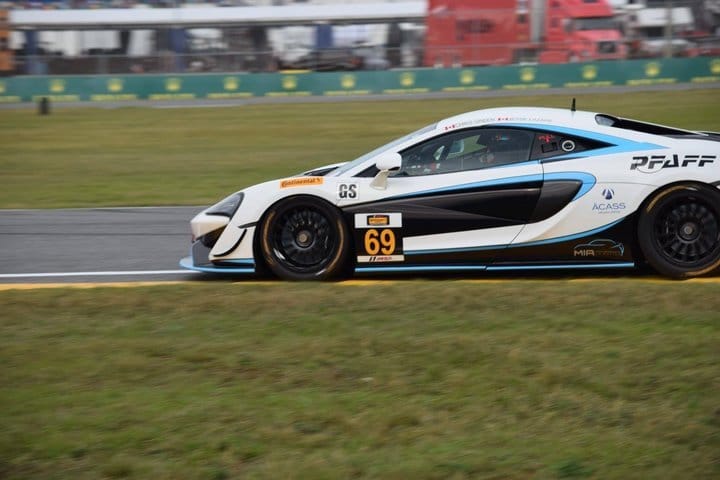 On Friday afternoon, Motorsports in Action’s Jesse Lazare was fastest overall in IMSA Continental Tire SportsCar Challenge practice No. 2 at Canadian Tire Motorsports Park.  Lazare’s lap of 85.498 seconds (103.539 mph) was just a couple of hundredths of a second slower than Trent Hindman was in the morning session.  However, it was more than eight-tenths of a second faster than C360R’s Paul Holton.

VOLT Racing is campaigning a Ford Mustang GT4 this weekend instead of their McLaren 570S GT4.  They did the same in Pirelli World Challenge at Lime Rock in May.  So far, so good.  Alan Brynjolfsson was third quickest in the session, followed by CJ Wilson Racing’s Marc Miller in the fastest of the Porsches.  Damien Faulkner in the second CJ Wilson Racing Porsche was fifth.

In Street Tuner, Owen Trinkler used the V6 power under the hood of his pink Nissan Altima Coupe to top the charts.  Trinkler’s lap of 92.316 seconds (95.892 seconds) is approximately one-eighth of a second slower than Mat Pombo‘s best lap from the first session.

Trinkler’s lap was a tenth and a half faster than JDC/Miller MotorSports’ Stephen Simpson in the lone BMW 228i.  Rennsport One’s Spencer Pumpelly was another quarter of a second back in third, followed by C360R’s Pierre Kleinubing.  Pombo’s MINI was fifth quickest.