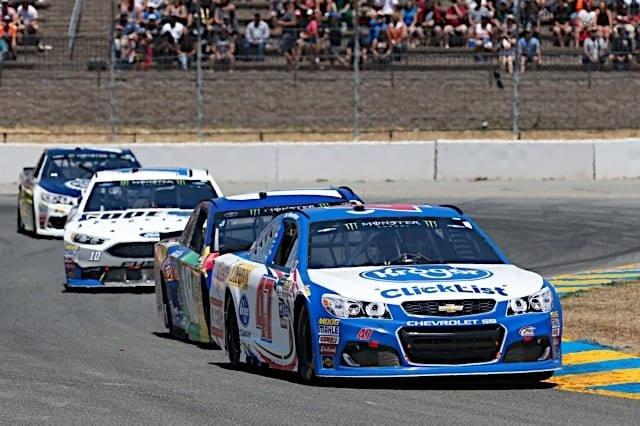 Kevin Harvick is no stranger to Victory Lane.

He was a fixture there this weekend at Sonoma Raceway, winning both the K&N Pro Series West race on Saturday and the Monster Energy Series race on Sunday.  Yet the Cup victory was Harvick’s first ever at Sonoma in NASCAR’s top series, and it came 11 years after his only other road course win at Watkins Glen International.

Despite being a solid road racer for most of his career, Harvick has not made many trips to Victory Lane at the tracks which require right turns.

It turns out that that statement could be applied to many more drivers than Harvick.  In the last dozen years, the two road races in NASCAR’s top division have produced a wealth of winners.

With his Sunday win, Harvick became Sonoma’s 11th different winner in its last 12 races. Only Kyle Busch has made multiple trips to the winner’s circle during that time.

The variation of winners at Watkins Glen is a little less dramatic, but still notable.  Eight different drivers have triumphed in the last 11 races there, with Busch, Tony Stewart and Marcos Ambrose taking two wins each.  Additionally, the last five races at the Glen have been won by five different drivers.

Road racing in NASCAR remains an infrequent experience.  Yet the revolving door of winners at Watkins Glen and especially Sonoma suggests that the road races have become two of the most wide-open events on the MENCS calendar.

There is no road course favorite right now, and no dominant driver on NASCAR’s twisty tracks.

When taking recent history into account, not having a road course king makes the present stand out.  Prior to 2006, NASCAR had a well-defined group of drivers who were good bets to post strong results on the road courses.  From the late-1990s to the mid-2000s, that group was really more like a duo, namely Jeff Gordon and Tony Stewart.

From 1997-1999, Gordon was undefeated at the Glen.  He pulled off the same feat at Sonoma from 1998-2000.  By the following year, Stewart had broken up Gordon’s streak and notched a win of his own in wine country.

Even after they stopped winning with such frequency, Gordon and Stewart retained their status as the road course dominators.  Their departure from the driver’s seat has left a void that no one has filled.

Before the days of Gordon and Stewart, NASCAR had drivers who excelled on the road courses more than their peers.  Similar to Gordon, Mark Martin won three races in a row at Watkins Glen from 1993-1995.  Amazingly, Martin won all of those races from the pole.  Before that, winners at the Glen included Rudd, Rusty Wallace, Tim Richmond and Ernie Irvan.

Turning back to Sonoma, the list of winners there includes many of the same names.  Wallace, Irvan, Rudd and Martin combined to win six of the first nine races at Sonoma, with Wallace and Irvan getting two apiece.

The final events at the famed Riverside International Raceway tell a similar tale.  Richmond, Wallace and Rudd combined to win eight of the last 13 races at Riverside, with Richmond and Wallace splitting the last four.  All told, Rudd, Wallace and Geoff Bodine were the only three drivers to win at Riverside, Watkins Glen and Sonoma, though in fairness to Richmond, he never got the opportunity to race at Sonoma.

The present era has been different.  Gordon and Stewart are now both on the sidelines.  So are Ambrose and Juan Pablo Montoya, two recent drivers with road course expertise who could have been the next road course masters if they had stayed in NASCAR.  AJ Allmendinger remains something of a road course specialist, but his results have been too inconsistent overall.  He has the same number of road course wins as drivers like Jimmie Johnson, Kasey Kahne and Denny Hamlin, none of whom have been known as road course aces during their careers.

Yet it also says something that Johnson, Kahne and Hamlin have been able to win a road race.  The recent variance of winners at Sonoma and Watkins Glen suggest that road racing is no longer on the fringes of the NASCAR world.  The ability to handle road courses has become a more central component of a NASCAR driver’s skill set.  If everyone is putting more focus on road courses, then there is little room for ringers, and maybe even dominators.

Looking ahead, the era of wide-open road course races could continue for years to come.  Yet the Cup Series is clearly experiencing a changing of the guard.  Drives like Chase Elliott, Ryan Blaney, Daniel Suarez, Erik Jones and other relative newcomers to NASCAR’s top level have yet to fully show off their road racing abilities.

The next road course king will likely emerge from that group.  However, the throne remains unoccupied for now.