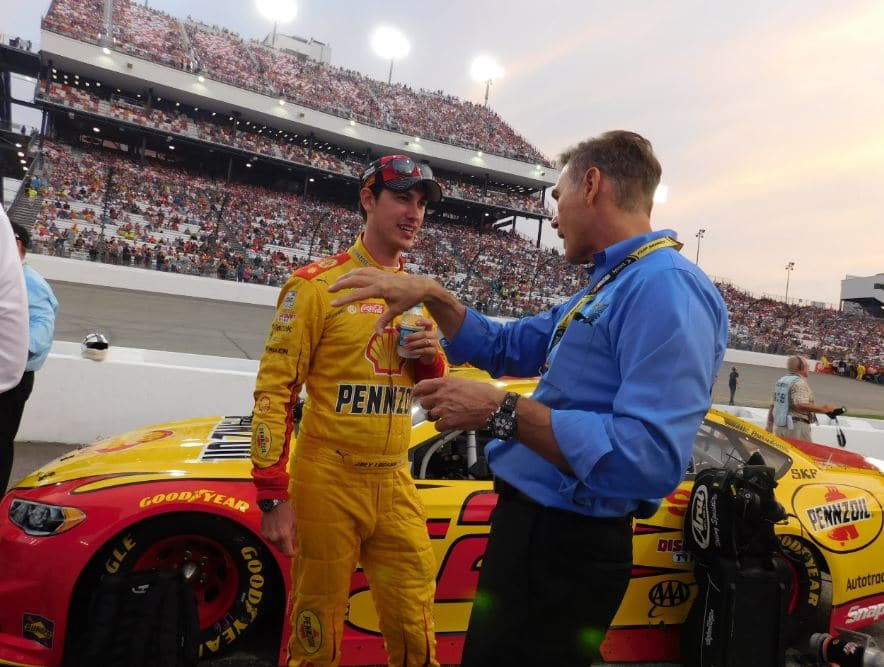 If you add up the numbers 78 and 22, what do you get? The score that both Martin Truex, Jr. and Joey Logano have at Charlotte Motor Speedway as of late.

Truex, who has won three of the last five races this season, broke NASCAR records the last time at Charlotte, leading 392 of 400 laps in May’s Coca-Cola 600. Meanwhile, though not as dominant, Logano led 227 of 334 laps in the fall race last year, his first of three straight victories that season.

After owning the last two races at NASCAR’s home track, who will have the upper hand this time?

Well, if you’re looking at recent numbers this year, there isn’t even a question. Heck, this could be a race on Heelys to the grocery store and most of NASCAR nation would still pick Truex to lead most of the way and take the win.

But Logano isn’t the one with the target on his back. With dominance comes lots and lots of attention. If you ask most of the Chase field, they see themselves as underdogs behind the shadow of the Furniture Row Racing No. 78.

Despite only one win this season – compared to three at this point last year – Logano has consistency on his side, finishing 11th or better in 15 of the last 17 races.

If it’s true that the “real” Chase starts now in the Round of 12 – which will be cut to eight in three races – then Logano is part of a group of drivers who’ll need a win to be taken seriously from here on.

Truex may be the shark in this drying-up pond, but the No. 78 driver has seemed to only increase in speed when people are pointing their way. You have to give the nod to Truex to take his fifth win of 2016.

Will Cole Custer Continue to Show XFINITY Speed in Charlotte?

He may be a full-time competitor in the Camping World Truck Series, but Cole Custer has been making some hay in the XFINITY Series in 2016.

Making the step up to the latter at Richmond International Raceway in April, the 18-year-old finished sixth in the No. 5 JR Motorsports Chevrolet, barely missing the top 5 by losing to Austin Dillon at the line.

Returning to JRM at Charlotte in May, Custer grabbed fourth place before finding issues at Kentucky Speedway toward a 32nd-place finish.

With a few more Truck Series events in his pocket since Kentucky, what will Custer achieve this weekend at Charlotte? Well, without a Chase berth in his usual series, Custer will have all the focus he needs to impress in Charlotte.

And remember, Custer stormed from sixth to fourth on the final lap of the May event to earn his best XFINITY finish to date. With 206 (successful) laps under his belt here, Custer has that positive experience to guide him this weekend.

Who’ll Be Eliminated in the XFINITY Chase?

Though the Sprint Cup Series kicks off Round 2 of its Chase this weekend at Charlotte, it’s an elimination race for the XFINITY Series, which will complete its third and final race of Round 1.

And unlike the Cup Chase Grid, which has a majority of the expected contenders forward to the Round of 12, XFINITY is in different water following two topsy-turvy races at Kentucky and Dover.

For starters, Erik Jones, who won four races in the regular season, crashed out at Kentucky, leaving him in a hole going into Dover. As if the wreck wasn’t enough, a late pit stop at the Monster Mile relegated Jones to a 16th-place finish. All of a sudden, the reigning Truck Series champion now sits four points out of the Round of 8 approaching Friday’s elimination event.

Talk about a shocker.

Additionally, Ty Dillon, who wrecked with Jones at Kentucky, finds himself three points behind the cutoff spot held by Brennan Poole despite making positive strides after finishing second at Dover.

Ryan Sieg and Brandon Jones are the other two drivers who’ll be on the charge on Friday, as they sit 10 and 18 points behind the cutoff, respectively.

Given the true statement that anything can happen, matching up Dillon and Jones with the last two on the good in points (Blake Koch and Poole), it’s hard to expect a close battle there.

With only three top 10s this year, Koch and the first-year Kaulig Racing have had a successful year no matter the outcome from here on. Poole, who hasn’t finished better than 10th in the last four races, still has 15 top 10s to his season and has been solid on race pace.

Jones and Dillon, however, have been two of the quickest series regulars and will have that extra incentive to bring the heat on Friday.

Ahead of seventh-place Koch, Darrell Wallace, Jr., Ryan Reed, Brendan Gaughan and Justin Allgaier aren’t too far ahead, as they all sit within 17 points of the cutoff zone.

In other words, the game is almost wide open. We saw Koch and Poole bang doors across the stripe last week at Dover. We might see the same across 10 drivers this Friday at Charlotte.

Will Mercedes Bounce Back After a Rough Malaysia?

Following a first-lap spin for Nico Rosberg and a blown power unit for Lewis Hamilton last week at Malaysia, Suzuka Circuit in Japan could not be a sweeter sight for Mercedes.

Though they lead the championship by 61 points over third-place Daniel Ricciardo, they will have a dose of determination to get back on top of the paddock.

And that could be bad news for the field.

After winning the last two Suzuka races, you can’t bet against them no matter the track next on the calendar. With a certain level of distress quickly cooled by Hamilton’s mid-conference Snapchat posts on Thursday (which oddly came under fire from F1 media and fans) there’s not too many reasons to believe it’s business as usual for the Silver Arrows in Japan.

On the opposite end of the grid, Red Bull took advantage of Mercedes’ woes last week to earn a 1-2 result, with Ricciardo snapping a winless drought of more than two years while Max Verstappen reached the podium for the fifth time.

Similar to Catalunya, where a tangle between Mercedes teammates on lap 1 opened the door for Verstappen to later take the win, it’s only under severe, race-ending circumstances from Mercedes that another team has been able to grab a win.

On plain speed, it has not been done since Hungary in July 2015 by Ferrari’s Sebastian Vettel.

Yes, momentum can be a thing of beauty sometimes and Red Bull has plenty of it. However, there are limits, and it seems reaching Mercedes is the limit nobody can reach.

Logano is proven capable, for some reason this year Doug Yates is not giving them any speed…..Step it up YATES!

It will be the Du Jour boy of this year Marty Cheatin’ Truex, Barney’s Beauty and Toys pick!!! Logano is not part of the picture at all. Plus he is private about his life so he has no sob story to sell because he is private….so no “feel good” story to plug!!!! I pray I am wrong…..

I wonder if Kenseth will have a say in Logano’s finishes.

I’m sure the race will be so exciting I won’t have time to work on my script for So You Think You Can Drive.

Answer to Burning Question No. 1: Neither Truex nor Logano will win Charlotte Cup race.