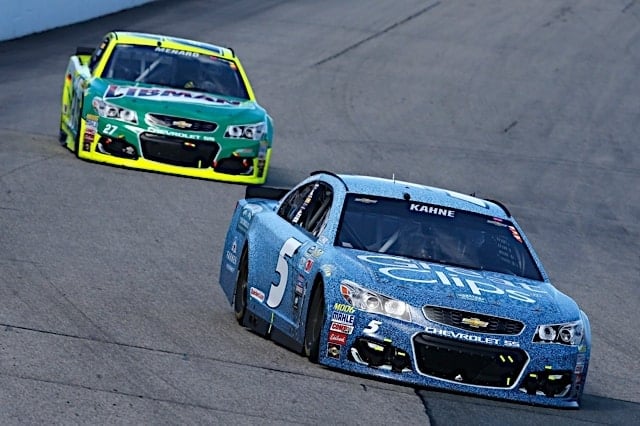 Kasey Kahne had to overcome adversity from the wave of the initial green flag Sunday in New Hampshire. After qualifying ninth, the No. 5 team had to start from the rear for unapproved adjustments.

During a 125-lap green flag run to start the race, Kahne worked his way up inside the top 15. From then, he fluxuated between fifth and 15th, depending on pit strategy.

After missing the Chase for the second straight year, Kahne has scored four consecutive top 10 finishes, dating back to Darlington. In the four races, he has a sixth-place finish, two sevenths and most recently a ninth on Sunday.

He is happy in the improvement that Hendrick Motorsports has shown as an organization over the past month.

“We didn’t have a top two car, but we were close to them,” Kahne said. “We were definitely a third to fifth-place car. We just had a long ways to go all day. The team did an awesome job and I’m really enjoying driving this car again. It’s been a lot of fun. Everybody is doing a great job and putting a huge effort in.”

This is the first time that Kahne has scored four consecutive top-10 finishes in over three years. In 2013, he started a streak running from Las Vegas to Martinsville, including a victory at Bristol.

Sitting 17th in the championship standings, the first driver outside the Chase, Kahne is racing for pride. As the chassis’ that HMS puts on the track improves, so does his confidence level, something he says he didn’t have for a while.

“I feel like it’s five because we were top 10 at Michigan as well, we just didn’t finish there late,” Kahne said. “We have a good group and I’m enjoying it again. We were struggling for a lot of the season early on, not really enjoying things going on and Mr. H(Rick Hendrick) said be patient and everything is starting to change.”

The Cup Series heads to Dover next week, a track that Kahne has a best finish of fourth on three occasions, including this past May. The outlook for the rest of the season is to win as the No. 5 team has nothing to lose.

Kahne has six career victories at the eight remaining race tracks on the 2016 schedule. He has been victorious at Charlotte four times, the most at any track for him.

Good for Kasey, H Scott is looking for a driver next season. Right where the quitter belongs.

Mr H finally gives him some decent cars when its to late and now he’s consistently in the top 10. Mr H seems to like the sponsor money he brings in but has been short changing him on equipment. Kasey didn’t forget how to drive, he just got stuck with a rookie crew chief and a left over crew and cars. Kyle busch couldn’t even win in the 5 car when he was there.