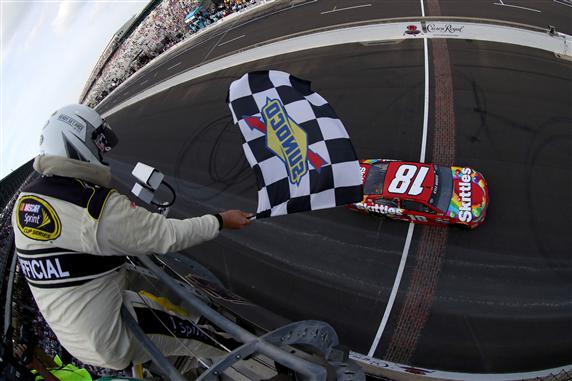 It’s difficult to imagine a time when Kyle Busch wasn’t a threat to win at least once per weekend. Not only does the defending Sprint Cup Series champion routinely enjoy dominant performances in NASCAR’s premier series, but also makes his way to Victory Lane often in the XFINITY and Camping World Truck Series. Already in 2016, Busch has 12 victories and has led an astonishing 2,492 laps in NASCAR’s top three division so far this year, and there is still a lot of racing left.

This past weekend at Indianapolis Motor Speedway, Busch accomplished something that no driver had ever accomplished before: he swept both the XFINITY and Sprint Cup Series races from the pole in one weekend. While Busch has swept race weekends many times before, he had never been able to do so from the pole position in both races.

This was also Busch’s second Brickyard 400 victory in two years and fourth victory of the season, which ties Brad Keselowski for the most wins of any driver so far in 2016.

“Just a great weekend for us and such a special weekend, too, being able to win a Brickyard 400 and have that opportunity come our way last year, and then to be able to back it up and win again here this weekend was special in its own right,” Busch said after winning the race. “And then to add in the fact that we sat on both poles and were able to win the XFINITY race yesterday and the Sprint Cup race today and do a sweep of the weekend two years in a row, that’s something that probably doesn’t come along very often.

“I just can’t say enough about the whole group of guys and people that are around us, around me and Adam and Joe with our opportunities that we’ve got with having fast race cars and Toyota’s support, M&M’s support, NOS Energy Drink’s support and it’s just been fun. We kind of had a down month there through the month of June especially, and July is kind of picking back up a little bit, so it’s cool to come here and sit on the pole and win the race. That’s just really special here at Indy.”

Both race wins over the weekend came in dominating fashion. Busch led 149 of the 170 laps run in the Brickyard 400 on Sunday, and 62 of the 63 laps in the XFINITY Series race on Saturday.

“I’ve never had a dominant car like this at Indy,” Busch said, referring specifically to his Sprint Cup Series car. “I think back to maybe

having dominant cars like this elsewhere and Bristol comes to mind a few times. But obviously this is just a special, special day and a special car.”

Last year when Busch won this race, he went on to win the championship. While it’s hard to say where he might wind up this year, he’s already almost matched his win total from last season (five) – a season where, by the way, he didn’t even run the full season because of an injury at the beginning of the year.

Team owner Joe Gibbs has nine wins as a team owner so far this year, and while that makes Joe Gibbs Racing a surefire favorite for the championship, he certainly isn’t jumping to conclusions before the Chase starts.

“I’m always nervous because I know in pro sports it’s very hard to stay up,  so our goal would be can we do that, stay up and get ready for the Chase and continue to win races, and our guys go with — I don’t think they think much about the Chase,” Gibbs said. “They’re thinking about trying to win every week.”

They’ve done a pretty good job of doing just that. Again, JGR has won almost half the races this season, and shows no signs of slowing down. In fact, a five-race gap where no Toyota went to Victory Lane had everyone wondering if either Chevrolet or Ford had finally surpassed as the leading manufacturer, only for Toyota to come back and win the next two races (Matt Kenseth won the week before in Loudon, New Hampshire).

Now that’s not to say that they don’t have some stiff competition. Team Penske is probably

the next strongest organization after JGR, though you could make a legitimate argument for Stewart-Haas Racing as well.

However, they still have some catching up to do if they’re going to win the championship in November.

And if a JGR driver wants to win the championship, they will probably have to go through teammate Kyle Busch first.

“This Toyota was awesome today, it was just so fast and able to get out front and stay out front,” Busch said in Victory Lane. “Not even some of my teammates could challenge. This was hooked up and on rails.”

More to come? Most likely.