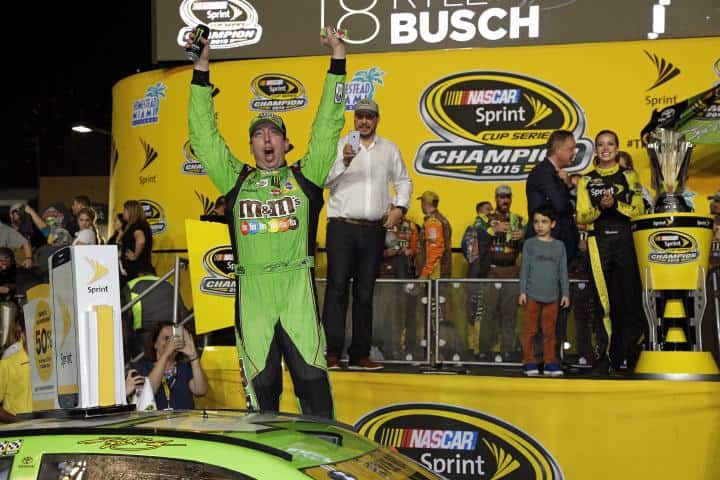 For all four drivers in the NASCAR Sprint Cup Series championship race, each brought a unique story. Martin Truex Jr. was trying to win the race as a single-car team; Kevin Harvick was going for his second straight title; Jeff Gordon had hopes of finishing off his driving career with a fifth championship.

Kyle Busch, the fourth driver, ultimately drove away as the champion. His unique storyline? He missed the first 11 races of the season because of a horrendous wreck in the Xfinity Series season opener in Daytona, where he suffered a broken left foot and fractured right leg in the process.

After several months of rehabilitation, Busch returned to the Sprint Cup Series with a tough task ahead of him: making it to the top 30 in points and winning a race. Granted a medical waiver by NASCAR, he would be considered eligible and a part of the Chase if he was able to do those two things. No easy task for a driver who sat on the sidelines in the beginning of the season and who, arguably, was not physically at his best just yet.

Not only was he and his team able to accomplish those two goals – they were able to go above and beyond. Busch won in his fifth race back in the Sprint Cup Series and went on to win three of the next four races. Through all that, Busch was able to work his way back into the top 30 and secure himself a spot in the 16-driver Chase.

Only, it wasn’t over. Busch worked his way through every round of the Chase for the Sprint Cup, advancing through consistency rather than wins, avoiding mayhem and chaos and instead settling for top fives and top 10s. The No. 18 was not the strongest car in the Chase but they were constantly seen in the rearview mirror.

Through three rounds, Busch found himself in a place that had seemed impossible in February: in contention for his first Sprint Cup Series champion. He qualified third, led 41 laps, passed Brad Keselowski on a late restart and held on for his first championship.

For Busch, this win had extra meaning not only because of his injury at the beginning of the season, but also because of another personal anecdoate. Busch and wife Samantha welcomed their first child (Brexton) into the world in May while Busch was sidelined with his injuries. Brexton and Samantha were in Victory Lane to celebrate the championship.

“I’ve never dreamed anything so little could be so happy, but he’s such a cool little dude,” Busch said of his son. “He’s always smiling and always having fun, except about four a.m., that’s daddy time, that’s a little rough. It’s all worth it in the end. Samantha (wife) and I, for what she went through, what we went through this year and to have Brexton (son) this year is pretty cool on 5-18-15 – so cool to have him and have him be a part of all of this here tonight and to celebrate with his father. He won’t remember what this meant today, but maybe one day he’ll understand what it means.”

For Samantha, the win and the championship was just as meaningful and emotional.

“This is amazing,” she said on the post-race championship stage. “I don’t think people know how hard he worked. What we both went through this year from trying to get pregnant with this one to the accident to fighting his way back – it’s absolutely amazing. He’s (Brexton, son) has been the greatest blessing. It’s just a storybook year. I’m so proud of Kyle (Busch) and the team. It’s truly – I can’t even tell you my emotions right now – this is absolutely amazing.”

Busch may not have always been a fan favorite, but there was nothing but cheers from the grandstands as the No. 18 celebrated on the frontstretch. And though most eyes were on Gordon at the beginning of the race, Busch’s victory garnered kind words from his peers as well.

Congrats to @KyleBusch and @JoeGibbsRacing on the title. Amazing comeback throughout the year.

On to next season- #2crew will work all off season to be Bigger, faster, stronger & BETTER

Way to go @KyleBusch. Way to "pound em into the ground" #champs

Even Gordon went to Victory Lane to congratulate Busch on his first career championship, saying Busch can go on to do even greater things.

“I’ve said this about Jimmie [Johnson] before he got his first championship: If he ever gets one, watch out, because once you believe in yourself and you get confidence and you know what it takes to do it and you’re not second-guessing what you’re doing and you pull it off, watch out, you can go on a tear, and Jimmie did that, and I think Kyle is another one of those drivers that can do that, as well,” Gordon said in his final post-race press conference as a driver.

For Busch, this victory was not about himself. It was about his team, his family, and about being grateful for those who supported him and helped him get to where he is. It was about fighting through adversity and doing what most said was impossible. Even Busch wasn’t sure it was possible. No one believed that Busch could come back and win five races, let alone legitimately compete for the title. Heck, some wondered if he would ever be the same again.

However, this season, there was a mix of “old” and “new” Kyle Busch. He is still the same fiery competitor. He still hates to lose, despises points racing, and is able to find speed where lesser drivers cannot. On the other hand, a family has brought him a renewed perspective, the injury gave him a gratitude he did not prior possess, and a team and sponsors that never gave up on him has molded him into someone more mature. Someone more motivated.

In other words… a champion.

“This championship is all for these guys, my wife, my family, everyone who has had to sacrifice so much to get me here to this place today, whether it was on my team right now, or on my teams in the past,” Busch continued post-race. “It’s really awesome, awesome, awesome – I can’t thank M&M’s enough. M&M’s Crispy is a phenomenal sponsor – I love the family, they are so great and with us here today. This is a long time coming for them. They’ve been in this sport two, maybe three times as long as I have been here and this is their first opportunity for a championship. I can’t thank Toyota enough, I had a very fast Toyota Camry tonight. Adam Stevens (crew chief) prepared such a great racecar. Adam Stevens is my hero – I love that guy. I’m glad I could get the fifth win to get him a little bit more of a race for next year, that’s pretty awesome. I can’t thank Interstate Batteries enough, Monster Energy for sticking with me and all my fans. All the Kyle Busch fans out there –man I appreciate all you guys so much, everyone that follows me through the thick and the thin, through the good and the bad and all the ones that are always behind me – you guys are awesome! Everyone here, you guys are awesome, too. This is a dream come true, a dream come true.”

People say Busch is a lot of things. The detractors say he’s a hothead, a whiner, and immature. The fans say he’s talented, tenacious and tough to beat.

Now, both sides have something else to call him: a champion. And who knows what additional numbers Busch will add to his already illustrious career.

For Gordon, it was the end of an era. For Busch, you have to think this is just the beginning.

RE: “If he ever gets one, watch out, ….” keep in mind that the current crapshoot elimination chase format lessens the chances of someone being able to win the championship on skill or experience alone. Luck and circumstances now rule the game.

A long time ago Richard Petty said he’d rather be lucky than good. Brian has taken that to a whole new level and I can’t wait for the “improvements” he makes to the chase during his idle winter when he is not in the vault.

Good column Summer and a refreshing departure from your colleague who wished Kyle a rabid dog!