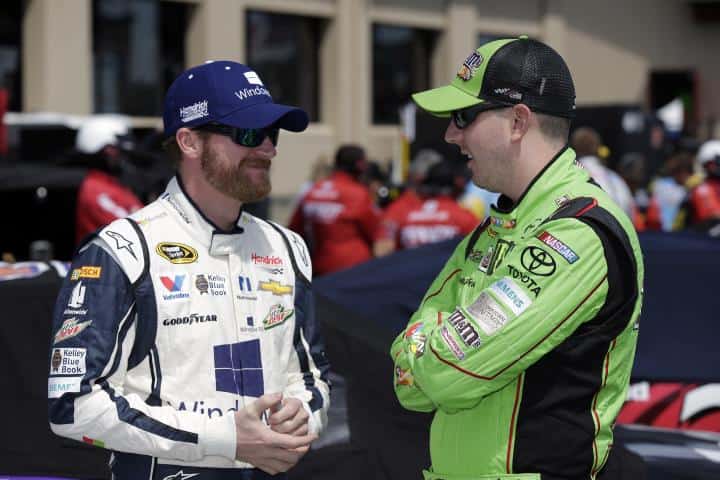 Frontstretch will scour Twitter and other social media platforms looking for some of the best posts from your favorite NASCAR personalities, drivers and media members from all across the industry. These were some of our favorite posts from this week and we hope you enjoy them too!

Elliott Sadler went to a concert this past weekend while the NASCAR Xfinity Series had an off weekend. Elliott showed everyone a photo of the stage before the big show got underway. This validates that even racecar drivers love to attend concerts when not working just like us!

@SpotterBrett. All these spotters up there and no sign of you. Camera didn't pan far enough to something with a/c??? pic.twitter.com/Nnb2sqpo64

During the Sonoma weekend, Clint Bowyer had some fun with his spotter during some down time. FOX Sports 2, which covered both practice sessions on Friday, showed the area where each of the spotters were located. Bowyer sent this photo, asking his spotter Brett Griffin, why he’s not pitcured.

Sometimes @RaceSonoma is challenging for me so I always make a track map for notes and race day help pic.twitter.com/hqxeDYsEzi

Landon Cassill knows a thing or two about the Sonoma Raceway road course. On Saturday, Cassill posted this tweet, showing everyone how he gets around the road course. It’s safe to say, if we’re going to Sonoma, we know who to follow throughout the weekend.

Tony Stewart had some fun over the weekend while in the Sonoma area. On Saturday, Stewart went to have fun at an arcade center. He later posted this photo, showing everyone his trophy. It will be interesting to see what he will do with it!

Kevin Harvick had the opportunity to meet some interesting people over the weekend at Sonoma. On Sunday, Harvick got to meet former MLB star Barry Bonds prior to the race. It’s safe to say, these two athletes seem to get along very well!

It was a good day! ?? pic.twitter.com/jF18xsbNmO

After going through some struggles over the last several months, Kyle Busch broke the ice with a victory on Sunday at Sonoma. Busch posted this photo shortly after, showing everyone his love for Samantha. Braxton, his newborn son, was not in attendance.

The fans have spoken! #Rainbow24 is back @BMSupdates night race. Thanks to @AxaltaRacing for making this happen.

This morning, Hendrick Motorsports, Axalta and Jeff Gordon announced some exciting news regarding the Sprint Cup Series race in August at Bristol. The three announced that Gordon would run a rainbow throwback pant scheme one last time in his career. It seems, from this tweet, that everyone is excited about running the car.

The amount of money raised last night at the live auction was unbelievable. Thanks!#WilsonKahneDrive #StrongAgainstCancer

Kasey Kahne and NFL star Russell Wilson raised some money for cancer research in a sports memorabilia auction. The two raised more than $600,000 for the Wilson Kahne Drive. This is just one of the things that all athletes should do from time to time.

Appreciate all the support out at the @TODAYshow!!! It makes the trip well worth it. And me way less nervous. ???? pic.twitter.com/wYUwxkOfAu

Dale Earnhardt Jr. had a cool experience on Tuesday morning on CBS’s Today Show. Earnhardt posted these four pictures, showing everyone he appreciates the support from his fans. That is a lot of autographs to sign!

Jamie McMurray had the opportunity to meet some McDonald’s employees in the Dallas Fort Worth area on Tuesday. McMurray posted this group photo, showing everyone his experience. Let’s just say, these people are very lucky!

That concludes this week’s edition of Tweet ‘N’ Greet! Be sure to check back here next week for another edition featuring numerous people all around in the NASCAR industry! If you’re on Twitter and have not already, please give us a follow @Frontstrech!