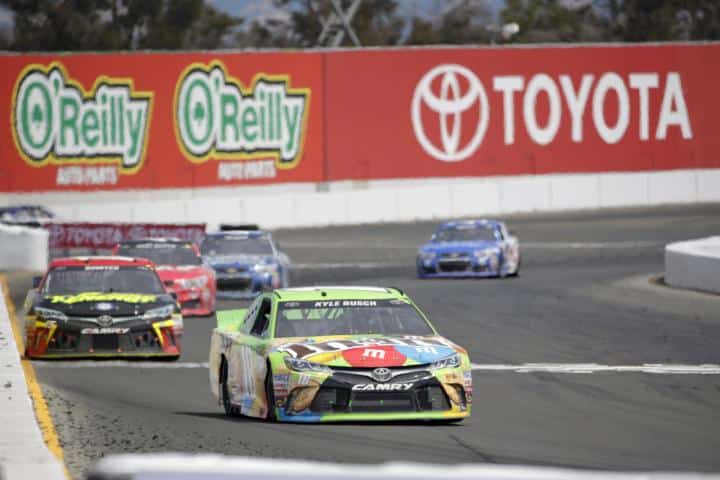 When Kyle Busch suffered through a horrendous wreck in the season opener for the Xfinity Series at Daytona in February, some wondered if he would ever race again. Once doctors determined the severity of the injuries—a broken right leg and fractured left foot—the question became when he would return. Next season? Six months? Longer? Shorter?

Even if Busch were to return to Sprint Cup (and Xfinity) competition, I don’t think anyone would have predicted that he would return as soon as mid-May for the Sprint All-Star Race. Even still, expecting Busch to be competitive, let alone a race-winning driver, seemed unfair.

Turns out that, despite Busch’s (correct) assertion that bones only heal so fast, they were but a fleeting obstacle in his season as a whole.

In his seven races since his return to racing (including the All-Star Race and one Xfinity race), Busch has already won twice and led 51 laps. Even more impressive is the fact that he won in his first Xfinity Series race after the injury, and his first victory in the Sprint Cup Series came at a road course race of all places!

This Sunday’s race at Sonoma Raceway is an event synonymous with lots of footwork (at least moreso than usual), so this would have seemed one the least likely spots for Busch to return to Victory Lane. Yet he still managed to pull it off, even with a little bit of extra soreness.

The win may lock Busch into the Chase, provided he can make it into the top 30 in points. The task is not impossible, but it will still be a tall order.

However, the win at Sonoma Raceway had a little extra special element to it that was rather unexpected and made the victory just a little sweeter for Busch (and I’m not talking about baby Brexton).

Kyle’s older brother Kurt Busch finished second on Sunday, which was a one-two finish for the Busch brothers, a first for them in the Sprint Cup Series. This result was a little surprising to me considering that the two of them have amassed an impressive 57 wins between their respective careers. They’ve managed to wreck together. How have they not managed to finish first and second?

“Oh, I used to kick his ass in Legend cars all the time,” said Kurt post-race. “But that’s when he was 12 and I was 19, so a little bit of a difference there. But no, we used to finish first and second a lot racing Legend cars.”

Ok, so clearly this isn’t the first time in their careers that they have managed to finish one-two, but considering that both of them have been active in Cup since the early 2000s, I was still surprised this was a first for them at this level of racing.

Kyle was happy to see Kurt in his rearview mirror in the closing stages of the race, but not for the reason you might think.

“I seen him back there battling with Bowyer, and I was like, come on, man, get to second, because I knew if he got to second he might be my blocker for everybody behind me,” Kyle said. “I figured he’d take the brunt of it; he’s got a couple wins, you know. But I’m sure that’s not the way he thought about it. He thought about coming up and challenging me for a win.”

Both Kyle and Kurt have been in the headlines this year for missing races, though for a different reason. Following domestic abuse allegations from ex-girlfriend Patricia Driscoll at the beginning of the season, Kurt was suspended from the season-opening Daytona 500 and did not return until he was cleared of criminal charges, marking the first time since 2001 the sport held a Cup race without one of the Busch brothers in it. Kurt missed the first three races of the 2015 season, but has won two races since then and, despite the absence, is in the top 10 in points. In other words, he’s already in the Chase.

Now Kyle is trying to do the same thing, though he has a much more challenging road ahead of him. Though NASCAR granted a waiver to both drivers, Kyle has a bit of a taller order. (Note: NASCAR waived the rule that states drivers have to attempt to qualify for every points event in order to remain eligible for the Chase. Both Kurt and Kyle still had to meet the remaining criteria, such as being in the top 30 in points.) Kyle is 37th in points, with 136 points separating him from 30th.

Several projections show that he will have to average somewhere around a 13th-place run in the remaining regular season races in order to make it into the top 30 in points by the Chase-setting race at Richmond in September. However, winning on Sunday was at least one checkmark off of the list.

The long and short of it is that both drivers have overcome obstacles this season and have grown a little closer in their shared experience as competitors fighting for their right to compete in the postseason.

“Honestly, over the years, when I’m off away in college as a 19-year-old and he’s just starting out racing as a 12-year-old, I don’t even know what grade you’re in when you’re 12 years old, seventh grade, that just should be a snapshot of how far apart we grew up in age,” Kurt continued after the race. “Then when you get into your late 20s you start to get closer, and that’s what’s happened to us as brothers. I really enjoyed the year in 2012 when we both drove for KBM, Kyle Busch Motorsports, and drove that Xfinity car. That was great to share, him racing and myself racing, to work together as drivers, but not a lot of times we finished one-two, as amazing as it is.”

Kyle was also pleased with the result, and extended the credit to another member of the family.

“Really cool to come home one-two today, especially on a road course,” Kyle emphasized. “We grew up racing on ovals, but to do that here on a road course, I think that’s just a true testament to our father and everything he’s done for us over the years to get us to the point which we’re at, and to have both Busch brothers be as good as we are and to be winning drivers on the Sprint Cup tour each year is certainly a true testament to our family.”

Certainly it’s not surprising to see either of the Busch brothers finishing up front, let alone both of them in one race. While I think that both Kyle and Kurt would have enjoyed the finish regardless of the circumstances, I can’t help but think the trials and tribulations that have crept up on them this season (regardless of who you believe in what story) partially contributed to the twinkles in the eyes of the Busch brothers after the race.

Well… I’ll take that back. Maybe the twinkle in Kurt’s eye would have been just a little brighter had the first two positions been switched. But just a little.

Oh the bandwagon is going to be full this week….:)

I have nothing against Kyle winning but I am troubled by his comment of hoping that Kurt would be a blocker for him. If I’m not mistaken they run for different teams and if I was Kurt’s team owner the last thing I’d want him to do is block for Kyle (Regardless of whether or not they are brothers). That’s not what he was hired to do. He was hired to do his best to get the car into Victory lane. That objective goes for any driver out on the track.