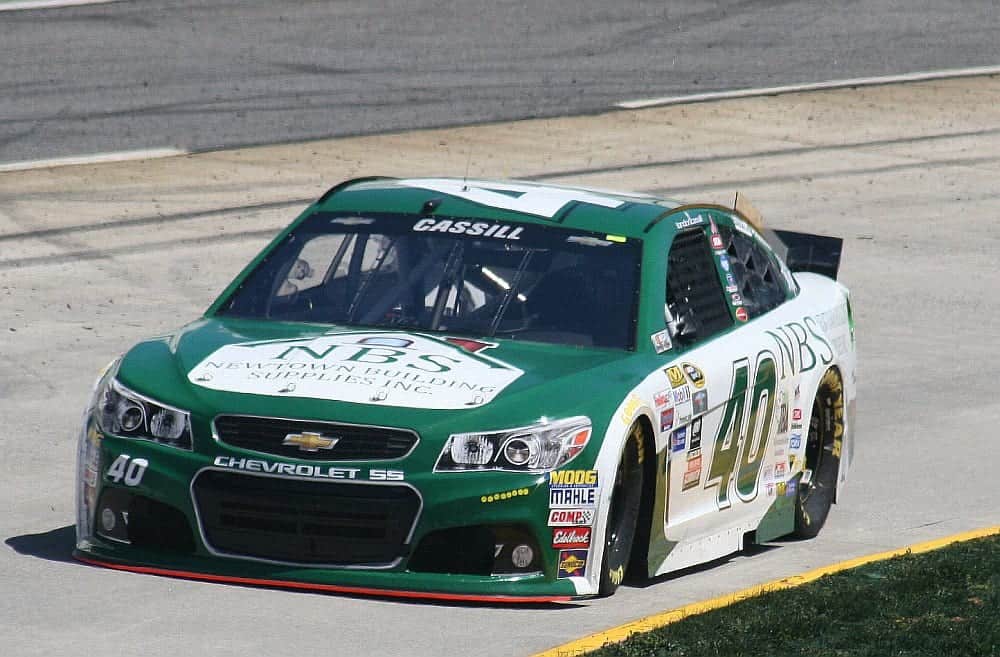 Racing for one of the smallest teams in Sprint Cup isn’t as easy or as glamorous as driving for one of the sport’s elite organizations. For Hillman Smith Motorsports and driver Landon Cassill, the goals are more modest and the path to those goals more difficult, but seeing how far the team has come in the last two seasons has been its own reward. Cassill sat down with Amy Henderson in Bristol to talk about the team’s growth, what’s next and another big change on the horizon.

Amy Henderson, Frontstretch: Your team has shown remarkable improvement this year. Is it due to doing something different or is it the experience you have built over the last couple of years?

Fortunately, we finished the year last year with our cars driving really good. That kind of helped this year, because we were putting the engines in and running good right off the bat. We’re in a good rhythm right now. We’ve got good short-track setups and our intermediate stuff has been pretty good.

Henderson: Is it a matter of taking it one step at a time — now you’ve got the horsepower so you can concentrate on the next thing, and the thing after that?

Cassill: It’s never-ending. It’s nice to not have to worry about the motors, for multiple reasons. For one thing, it’s nice to have the power that we need and I never have to question it. I just don’t have to worry about it. The second thing is, they’re not our responsibility any more. It’s one less thing that we have to worry about as a team. It’s somebody else taking care of the engines. They’re bringing them to us, putting them in, and providing an engine tuner. We built our own engines before. It’s hard enough for a small team to prepare their racecars, let alone having to prepare the engines and make sure they’re on time, make sure they’ve got what they need and who’s taking care of it. Then, if we’d blow one up, we’d be responsible for it. So, obviously we’re paying a premium for the engines we’ve got now, but they’re out of our hands.

Henderson: How many full-time guys do you have right now?

Henderson: That’s a big step. I remember talking to you a couple of years ago and you had like six guys.

Cassill: Yeah. We’ve made a lot of progress. We’re able to be fairly self-sufficient as well. We do our own bodies. We’re working on a new chassis. We’d like to be able to build our own racecars. I feel like it’s so important to keep fresh chassis underneath these things. They just seem to gain weight over time, and they lose a little bit of their feel. They get a little more pliant over time, and they gain weight. So to be able to build our own racecars and to be able to keep prepped racecars under me is a big advantage.

Henderson: Your team shares information with the No. 33 as well, so you’ve got a little more input. They’ve had Alex Kennedy, a young guy, on board the last few weeks. Talking to a couple of guys on the team, they’ve told him to follow you on the track to learn. You’ve gotten that senior driver role this year.

Cassill: Yeah. It’s pretty cool. We’re just putting our heads down and focused. It seems like anything that helps the [No.] 40 car is able to trickle down and help the [No.] 33 as well.

Henderson: We’re sitting here at Bristol, in the rain. They hope to get the race in today or Monday, but NASCAR has pushed back to Tuesday in the past. What kind of challenges does something like that bring to a smaller team as far as turning around, going back, and getting turned around for the next race? Bigger teams have the cars sitting there prepped and ready. Some of these teams are probably taking the same car. So how do you turn it around?

Cassill: It’s definitely tough on us. Maybe not specifically for Richmond, but maybe looking farther ahead to Talladega and Charlotte. We’re pretty prepared right now with our Richmond car. We tested there, so it’s pretty much been done. I’m not sure exactly where we’re at with it right now. It might need setup still or time on the pull-down rig. It may not hurt us for next week, and the guys might be tired in the shop during the week. Where it would [have] put us behind is if the guys needed to work on the Charlotte car on Monday and Tuesday, it puts them a day behind on that. If we have to race Monday or Tuesday, we’ll feel the effects of it after, when we have to start preparing cars for (later).

Henderson: Talk a little about the next steps for the team. We’ve talked about the huge improvements you’ve made, but what’s next? What are the goals looking toward the end of the year?

Cassill: We’re really on track for where we feel like we should be running — that’s 25th or better every week. We really had a hard time in the first couple of races, points-wise, but we’d really like to see ourselves in the top 30 in points by the end of the season. By the way we’re racing, we’re going to be able to achieve that. It’s just going to have to take some consistency to get there.

Henderson: I’m sure you hear the speculation about what you might do in a better-funded ride. But being with a small team, you’re the number one guy. You’re not one of four or five, you’re it. Does that change your perspective at all?

Cassill: It’s nice to know that the team is smaller and we operate a lot more intimately. We’re definitely a very close group of people and we have a very clear focus on what our goals are. There really aren’t a lot of politics in our team. So that’s pretty cool. There’s always that excitement and wonder of what it might be like with a bigger team with more funding, but in my opinion, I think the grass is always going to be greener, and you’re always going to wish something was better. It doesn’t matter if you drive for Hendrick Motorsports, there’s always going to be something to complain about and something you wish you had. I try not to focus on that too much.

Henderson: There’s something to be said for being able to look at the improvement your team has made and say, “I did this.”

Cassill: Yeah. Hopefully, someday, the big teams and the Fortune 500 sponsors out there can look at me and, even if they’re not looking to hire me, look at me and say, “Wow, look at what he’s accomplished and what he’s been a part of.”

Henderson: You have been adding some sponsorship.

Cassill: We’ve had some good companies. The companies that were on board with us last year — CarsforSale.com, Snap Fitness, Newtown Building Supply and CRC Brakleen — they all stepped up their programs this year. So that’s pretty exciting.

Henderson: You’re actually running for points in the NASCAR Xfinity Series. Again, you’re running with a smaller team and have done remarkably well. What does that bring to the table for you as a driver, and what extends to the Cup side?

Cassill: Overall, it’s an opportunity for me to run well and to overachieve, and that’s a good thing.

Henderson: You have a new baby on the way. How does that change your perspective?

Cassill: She’s not here yet. We’re pretty excited. Live will be a little bit different for sure. It’s going to be new for us with a new baby in the house.