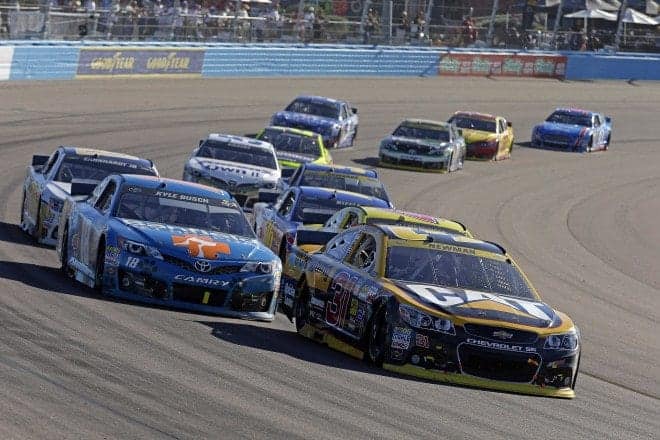 Here we go once again, as another long season of racing is about to kick into gear. Yes, we’ve already had events like the Rolex 24 at Daytona and the Chili Bowl in Tulsa. However, those races are long enough before the grind begins that they’re essentially standalone events. This weekend is anything but a standalone, with Sprint Cup teams competing in the 37th running of the Sprint Unlimited and qualifying for the Daytona 500. In addition, the ARCA Racing Series will hold their season opener Saturday afternoon.

I’ll be back here for the seventh consecutive year to keep tabs on telecasts and keep the TV broadcasts honest. The plan is somewhat similar to the past couple: watch races, take notes, give facts and make opinions known. Having said that, there might be some changes. Time is of the essence these days.

What does that mean? Instead of spending 750 words explaining something, I might just throw a YouTube clip up there and discuss a couple of broadcast aspects that stood out to me. While this example isn’t a NASCAR one, we’ll use the finish of Sunday’s Liqui-Moly Bathurst 12 Hour as an example of what I might have in store from time to time.

Here, the absolute enthusiasm of John Hindhaugh, Richard Craill and Graham Goodwin in the broadcast booth on the triple-cast (they were the TV commentary booth for the Seven Network and 7Mate, the radio announcers for Radio Le Mans and the announcers for the internet livestream of the race at the same time) was amazing. The three men are clearly very knowledgeable about sports car racing and greatly enjoyed the action on-track.

However, some of the choices made by the director of the broadcast were unsatisfactory. Once Katsumasa Chiyo in the Nissan GT-R took the lead on the green-white-checkered, he was gone. The battle was for second between Matt Bell in the Bentley, Laurens Vanthoor in the Audi R8 Ultra and Stefan Mücke in the Aston Martin. The final corner saw all three positions change. However, viewers couldn’t see that. Neither could the commentators due to the director’s decision and the fact that a crossover bridge was in the way. That’s weak. They simply wanted to show Chiyo cross the line, but they botched that as well with an unusual angle that made it look like the finish line was further up the track than it actually was (the line is actually under the bridge).

That ends the Australian portion of today’s show. Of note, that was an excellent race on Sunday despite 20 full course cautions. The whole race is available for viewing at the race’s official website if you want to go down that rabbit hole.

On to stock car racing, as Friday is the beginning of the future for FOX Sports’ coverage of NASCAR. Two weeks ago, the network announced their changes. As I’ve previously stated, it’s a mix of old and new.

The broadcast booth will remain the same for Sprint Cup races as Mike Joy, Darrell Waltrip and Larry McReynolds all return for their 15th year together. As a result, the overall sound of the broadcast will be similar. In addition, Chris Myers will continue to head up the “Hollywood Hotel” along with Michael Waltrip. Like it or not, their pre-race show should have the same rhythm.

Pit road, by comparison is a complete toss-up. Krista Voda is gone, having left for NBC. We’ll cover Steve Byrnes’ situation a little more in-depth later. Matt Yocum is still there, now serving as the de facto captain of the squad. He’s joined by Jamie Little, who has moved over to FOX Sports from ESPN and Chris Neville, who joins from Turner Sports and FOX Sports’ IMSA coverage.

When it was announced that Little would join FOX Sports, my original thought was that she was going to be the new fourth pit reporter, joining Byrnes, Yocum and Voda. Had that been the lineup in the pits for 2015, FOX Sports would be in very good shape. Then, the changes happened. The end result is that the group is too thin. They need a fourth pit reporter. I’ve been saying it since Dick Berggren retired, but they’re really missing out on information with only three people down there. I would have liked FOX Sports to have Jeff Hammond, who will only appear on NASCAR RaceHub this year, serve as that fourth full-timer.

Much like what ESPN did towards the middle of the previous TV deal, the XFINITY broadcasts will have a slightly different on-air group in order to give the series its own feel. That’s great, provided that the personalities bring their “A” Game. Adam Alexander needs to bring his best to his new gig as XFINITY Series play-by-play commentator. Sadly, he’s been fairly mediocre in the past with Turner Sports and FOX Sports on Camping World Truck Series broadcasts. Vince Welch moves to FOX Sports to serve as the primary XFINITY Series pit reporter; his Sprint Cup contemporaries will join in as well on a rotating basis.

The big gets on the XFINITY side for FOX are the revolving guest commentators. Kevin Harvick, Jeff Gordon and Brad Keselowski will share the third seat in the booth during FOX Sports’ portion of the season. We’ll just have to see how that ultimately works. It could be amazing, having still-active drivers call the action or it could be a rather stale experience. We mustn’t forget that Gordon actually has a decent amount of TV experience, though from the times he guest hosted Live with Regis and Kelly plus his Saturday Night Live appearances. Arguably, Harvick could be the biggest question mark as he doesn’t have that much TV experience.

Keselowski could be excellent, or he could take over the broadcast by himself.  Once he gets into a groove, Keselowski may end up being a younger Kyle Petty in the booth. If his Twitter posts are any indication, Keselowski will bring an opinionated but informed voice to the action. No matter what, it’s definitely going to be worth watching…. at some point. The first few XFINITY races might be a bit of a drag as the drivers get used to providing commentary.

For the Camping World Truck Series, the loss of Voda also means that they have a new host for NCWTS Setup. That host is veteran John Roberts, who will be joined by Todd Bodine. I’d prefer Bodine to be an analyst in the booth if he can’t get a ride. Last year, Bodine acquitted himself well in place of Michael Waltrip in selected races.

Speaking of Michael Waltrip, all the changes to the on-air staff means that he is now the only FOX Sports personality that will be a regular with all three series during the first half of the year. That’s overkill. I don’t need that much Michael Waltrip. It’s as if FOX Sports saw the results of Bob Pockrass’ survey from last year and read Michael’s approval rating backwards. Do they think they’ll get a bump in the ratings because Michael did Dancing with the Stars and somehow didn’t get voted off the show during the first week? I would be hard-pressed to believe that all of Michael’s TV work isn’t hurting his Sprint Cup team, too. There’s only so much attention that he can give to the team when he’s got to spend 35 hours a week doing television and prepping for it.

Byrnes is still considered the official play-by-play commentator for the Camping World Truck Series. However, he will start the 2015 season on indefinite medical leave as he continues to battle head and neck cancer. When he’s healthy enough to return to work, Byrnes can reclaim any number of on-air roles that are his. Until that happens, a mix of Joy, Alexander and Brian Till will fill in.

Overall, there are a number of changes, both good and bad that viewers will be seeing in action for the first time over the next couple of weeks. Some of them will likely be home runs; others might not. Much like in the relationships between drivers and crew chiefs, chemistry is everything in a race broadcast.  It’s too early to tell how these changes will affect it, but either way, we’ll be here to cover both the good and bad of what FOX gives fans this season.

Here are your TV Listings for the week:

A quick note.  In addition to A Perfect Storm: The 1979 Daytona 500, there will also be a 30-minute presentation of the 1979 Daytona 500 with pop-up information.  There is no special name for that telecast.  (I have dubbed it Pop-up Style for the purposes of this column.)  What are the details?  Think Dale Earnhardt, Jr.‘s old show Back In The Day that aired on SPEED.  It’s like that, but with actual race telecast footage as opposed to reels from Car & Track.

We will have critiques of the Sprint Unlimited and ARCA Racing Series telecasts from Saturday in next week’s edition of Couch Potato Tuesday here at Frontstretch. For the Critic’s Annex in the Frontstretch Newsletter, we will be off this week. However, next week’s Annex will cover The Perfect Storm, a one-hour special about the 1979 Daytona 500 that is due to premiere Friday night on FOX Sports 1. By all indications, it should be a good watch.

At this point, there is still no public contact e-mail for NBC Sports. When they finally get around to creating a new link, I will post it for you.

As always, if you choose to contact the network by email, do so in a courteous manner. Network representatives are far more likely to respond to emails that ask questions politely rather than emails full of rants and vitriol.

I wonder if (hope that) next year is the year of some change in the booth/Hollywood Hotel.
I see Hammond has been basically relegated to the practice squad.

Way too many Waltrips is one reason why I hate watching the Fox portion of the season. I usually have to mute the TV.

When and if I watch the Fox broadcasts, it will be with the sound off. I’m tired of the “sound” of their voices – 15 years with the same group is too long especially when they sing the same song every week. I’ll avoid Mikey at all costs so that leaves out the other 2 racing series for me.

I know everyone hates the FOX broadcast crew, but, consider yourselves lucky. At least you have FOX Sports 1 and 2. Here in Canada, unless any of the FOX part of the schedule is on the local FOX affiliate (Channel 29 in Buffalo), none of it will be seen here. Too, once the schedule changes over to NBC Sports, we here can kiss any NASCAR coverage good-bye completely. I don’t like the Waltrips either, but, as they say, you don’t know what you’ve got til it’s gone.