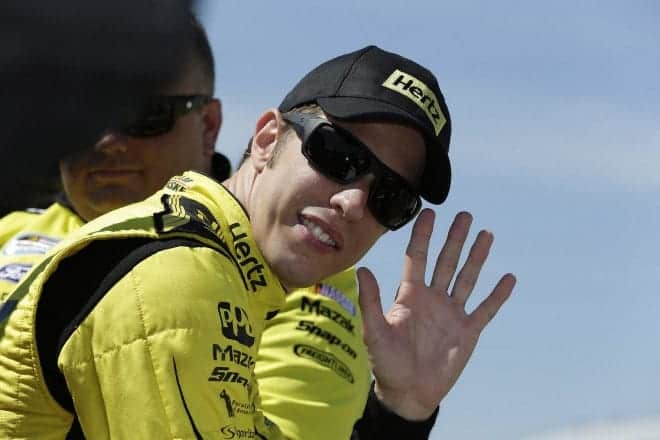 On Monday morning, FOX Sports officially announced their list of on-air personalities for its 2015 NASCAR on FOX properties.  While there many of them are in familiar positions, the addition of three former Cup Series champions should spice things up.

First, let’s go with what stays the same; the broadcast booth for FOX and FOX Sports 1’s coverage of the Sprint Cup Series.  The lineup of Mike Joy, Darrell Waltrip and Larry McReynolds will return for their 15th consecutive year together.  In addition, Chris Myers will return to the “Hollywood Hotel” with Michael Waltrip, hosting the pre-race show.  Darrell Waltrip will continue to join in during select segments of that telecast.

Pit road, however, is where the changes begin.  Matt Yocum remains there, becoming the lead reporter but he is joined by Jamie Little, leaving ESPN to be part of the team.  Chris Neville, after a stint on Turner Sports’ NASCAR pit team completes the crew.  Neville, who worked on TNT last year has been a part of FOX’s sports car coverage for over a decade.

After spending much of last season in Charlotte, NASCAR RaceDay will originate from the track for at least the entire FOX portion of the Sprint Cup schedule.  Danielle Trotta will host the show for the first half of the season with McReynolds and Kenny Wallace returning as analysts.  It was not announced how long the show would be each week.  Once NBC takes over the Sprint Cup and XFINITY Series, beginning at Daytona in July, John Roberts will take over the show.

For FOX Sports’ coverage of the XFINITY Series (which will mostly be seen on FOX Sports 1) Adam Alexander will serve as the play-by-play commentator with Michael Waltrip as the primary analyst.  In an attempt to differentiate the XFINITY broadcasts from the regular Sprint Cup telecasts, the second analyst seat will be filled on a rotating basis by three Sprint Cup regulars.  Those drivers are 2014 Sprint Cup Series Champion Kevin Harvick, four-time Champion Jeff Gordon and 2012 Sprint Cup Series Champion Brad Keselowski. Sources say Gordon is testing the waters for a potential role as an analyst full-time in 2016, after his retirement.

On pit road, Vince Welch, formerly of ESPN, will serve as the lead pit reporter for FOX Sports coverage.  He will be joined by Sprint Cup pit reporters Little, Neville and Yocum on a rotating basis.  A pre-race show entitled NASCAR RaceDay-XFINITY hosted by Danielle Trotta on-site will precede XFINITY Series race telecasts, run with McReynolds and Wallace serving as analysts.

For the Camping World Truck Series, Steve Byrnes is still considered to be the play-by-play commentator for the whole season.  However, he is still out on medical leave as he continues to battle cancer.  In his place, Mike Joy will do play-by-play for the season-opening NextEra Energy Resources 250 at Daytona.  After that, Alexander and IMSA commentator Brian Till will fill in until Byrnes is healthy enough to return to the booth.  On pit road, Hermie Sadler will be the sole full-time pit reporter, but he will be joined by a rotating cast of Welch, Yocum and newcomer Kaitlyn Vincie, previously of NASCAR RaceHub and regional series telecasts.  Finally, John Roberts will replace the departed Krista Voda as host of NCWTS Setup at the track each week.  He will be joined full-time by Todd Bodine.

Trotta will continue to host NASCAR RaceHub on weekdays in addition to her expanded role at the track.  The show will move to 6 p.m., effective Monday.  The move places the show back in the timeslot it had before SPEED was relaunched as FOX Sports 1 in 2013.  In addition, the show will air weekend editions that will update breaking news from the track.  Wally Dallenbach, Jr., Jeff Hammond and McReynolds will serve as regular analysts on the show in addition to a rotating cast of contributors.  Vincie will continue as a reporter on the show, joined by newcomers Alan Cavanna (most recently of NASCAR.com) and Andrew Doud.

Wow, having Jeff Gordon in the booth for the 2nd tier of racing (sorry who’s the new sponsor? – it changes too often) might even make me tune in — IF there aren’t too many Cup drivers racing that is — then not even Jeff Gordon will make it worth my while.

If they follow the ESPN playbook, the rotating Xfinity commentators will only need to study up on Chase Elliott and the Penske/Gibbs Cup drivers.
Looks like Jeff Hammond has been given last man on the bench status.

Indeed. Especially in light of Gordon’s announcement, Chase Elliott will be hyped so hard that even Bill and Cindy will get sick of him. Kyle Busch and “Bad Brad” will be cast as the villains stealing what rightfully belongs to young Chase.

FOX (and NBC) has hired cheerleaders, not reporters. NASCAR’s hands are all over this.

By adding MW to the XFINITY lineup really shows how Fox listens to fans NOT. There are so many people that do not like MW(me included). He just takes over a broadcast and never shuts up. Maybe if he spent more time with his race team instead of showcasing himself, the team might get a little better.