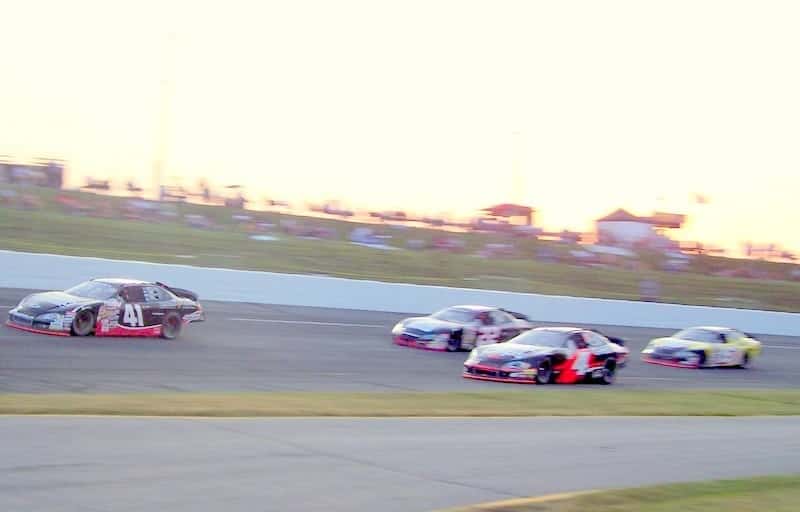 CLERMONT, Ind. – ARCA returned to Lucas Oil Raceway for the first time in 26 years Thursday night (July 28), so almost every driver in the field was looking at the track for the first time in a stock car. When the checkered flag flew at the end of the event it was Ty Dillon who once again put his No. 41 machine into victory lane.

Dillon used a late-race caution to put on fresh tires and make an adjustment to tighten his car in the corners to propel himself back into the lead, crossing the line ahead of Ryan Blaney. James Buescher who was also exchanging the lead with Blaney and Dillon for much of the race came home third while Dakoda Armstrong and Tom Hessert capped off the top five.

Dillon and Blaney brought the field to the green with Dillon scoring his fifth pole position of the season. When the green flag flew Dillon jumped to the point with Buescher and Blaney slotting in behind him. Dillon paced the field for the first 31 laps of the race but was unable to keep Blaney at bay, losing the top spot on lap 32. Two laps later Armstrong assumed the second spot as Dillon began to struggle with his handling.

On lap 36 the car of Benny Chastain went around in turns 1 and 2 to bring out the first caution of the event. The race went back green on lap 41 with Blaney leading Buescher for nearly 20 laps before Chastain spun again on lap 60, collecting Kenzie Ruston in the process. During the caution period Dillon and Buescher pitted but Blaney stayed on the track with Chad McCumbee and Grant Enfinger in tow, both of whom had pitted on the previous caution.

Ruston returned to the track on lap 93 with the front body work missing from her No. 55 ride. Buescher and Dillon both stalked Blaney for several laps, eventually getting to his back end on lap 97. Buescher made a move to Blaney’s outside but was unable to make his car stick and had to regroup before successfully making a move around Blaney on lap 99 just before Brett Hudson went around in turn 4 and caught the wall to bring out a caution at the midway point of the race.

Blaney pitted and came back out in 10th place while Buescher led Dillon and Tim George Jr. who moved into third when Blaney pitted. Blaney worked his way to fifth by lap 114 while Buescher was holding stage at the front of the field with Dillon and George in hot pursuit. The caution flew again on lap 117 which allowed several of the cars back in the field the opportunity to pit and make changes while the cars at the front stayed out.

The race went back to green until Bobby Gerhart spun in turn 4 and made minor contact with the wall to bring out another caution. On the ensuing restart at lap 136 a melee broke out on the front straight with George being jacked up and then drilled by Jared Marks while Joey Coulter spun in the scramble to avoid the cars bouncing off of each other. George, Marks and Coulter all sustained major damage which brought out a red flag because the front straight was blocked.

When the race resumed the intensity picked up at the front with Dillon trying to make a move on Buescher while Blaney got inside of Dillon but couldn’t get clear of him. The caution flew again on lap 147 which jumbled the entire running order as the top cars all came in for a final set of tires and adjustments.

When the race went back to green Armstrong was leading the race with Buescher and Dillon charging hard through the field. Buescher grabbed the second spot on lap 156 but only held onto it for four laps before Dillon made a move around the outside in turn two to grab the spot away from Buescher.

Lap 166 saw Dillon wrestle the lead away from Armstrong with Buescher following him into second position. Shortly after they dispatched Armstrong the No. 15 of Blaney swept into third place. As Dillon stretched his lead Blaney began putting heavy pressure on Buescher for the second spot. On lap 182 Blaney finally got by and set his sights on the front running car of Dillon.

While Blaney was clawing away at the lead of Dillon the leader got bottled up behind some lapped cars and the margin to second place decreased substantially. On lap 193 the seventh-place car went a lap down. As the field went through turn 1 on lap 198, Ruston made a move to the outside of a slower car and was unfortunately collected by Ryan Wilson with both cars ending up in the outside wall.

The caution flag ensured a green-white-checkered finish. The race went green the final time on lap 201 with Dillon getting a strong jump and opening a comfortable lead over Blaney. The last two laps went by without incident and Dillon took the checkered flag for the sixth time this season.

After the race Dillon felt the adjustments on the last caution made the difference that ultimately put him in victory lane.

“We took fresh tires on that last pit stop and made an adjustment to tighten us up on the exit of the corner. That change made us good enough to get up front and hold those guys off.” When asked about the lapped traffic holding him up near the end of the event Dillon noted that lapped cars are always tough. “They don’t give any direction about lapped cars in the drivers’ meeting so you have to stay on your toes when you come up on them. It is tough every week, you just have to be careful and make the right moves as soon as you can.”

Blaney was away from his car at the end of the race but his dad Dave Blaney was beaming over his son’s accomplishments. “He is a stud. He has taken to everything we’ve put him in and done a great job. We’ve run him in a couple of K&N races and a couple of ARCA races and he’s done great in both series.”

Armstrong knew he was in trouble when the leaders pitted after he had which gave them fresher tires at the end of the race. “The last 90 laps of the race was fun. It was rough at the beginning. At the end I held on as long as I could but I knew Ty was way stronger than we were. I used up my stuff trying to hold him back and I finally decided to let him go, but unfortunately the other guys got by me too. It was still a good run for us.”