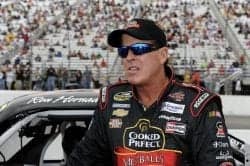 Hello, race fans! It’s time to shake off the cobwebs from the offseason because the Camping World Truck Series is back in action Friday night, and we have a lot of catching up to do before the green flag waves over the season opener at Daytona. As my husband and I talked about the upcoming start of what should be another fantastic Truck Series season, I couldn’t help but get excited. Heck, I even had goosebumps on my arms as we talked about not just a long list of new drivers, but a number of important storylines to watch. So, as the offseason wore to a close, I decided to change my traditional, team-by-team preview to look more at some of those “big picture” items to keep an eye on as the 2012 season dawns. Here they are, in the nick of time as tomorrow begins the 22-race dash to Ford Championship Weekend at Homestead-Miami Speedway…

Walmart has been around for 50 years as of 2012 and they’re going to celebrate that fact with a run in the July race at Daytona with a 56-year-old icon in Bill Elliott. The retail giant is also going to expand their Race Time program, which brings NASCAR merchandise and events to Walmart stores in …

After winning the rain-shortened season finale at Homestead-Miami Speedway, Johnny Sauter was ecstatic that he’d won two races in a single season, a feat he had been unable to accomplish since coming to NASCAR in 2001.

If you were to ask Timothy Peters, he would say, “winning at Lucas Oil Raceway was definitely one of the highlights of our season…” And who could blame him?

Hands down, the Kentucky 225 stands out as the big moment for Ron Hornaday this season.

Pick a race, almost any race. Despite missing the second event of the season, James Buescher mounted an impressive 19 top-10 finishes in 24 starts and made a serious run at the championship.

Winning the championship would arguably be the high point in any driver’s season, and Austin Dillon is no exception.

For Kurt Busch, the high points came few and far between in what he claimed was a frustrating season.

Kevin Harvick took the checkered flag and the caution flag ahead of Timothy Peters to win the AAA Insurance 200 Friday night at Michigan.

After what was an agonizingly slow start to season–as usual–suddenly the Camping World Truck Series has already hit the halfway point of the season. With just 12 races remaining, the 2011 campaign has already shaped up to be one of the more competitive ones in a few years.

Following the Lucas Deep Clean 200 at Nashville Superspeedway two weeks ago, Johnny Sauter held a 42 point lead over third place James Buescher, but that lead closed up considerably after last week’s visit to Lucas Oil Raceway. After waiting too long to change out a tire going flat, the driver of the No. 13 Chevrolet broke a swaybar and was forced to limp his way around the track to a disappointing 23rd-place finish. As a result, the top 7 are now separated by just 46 points with 12 races remaining.