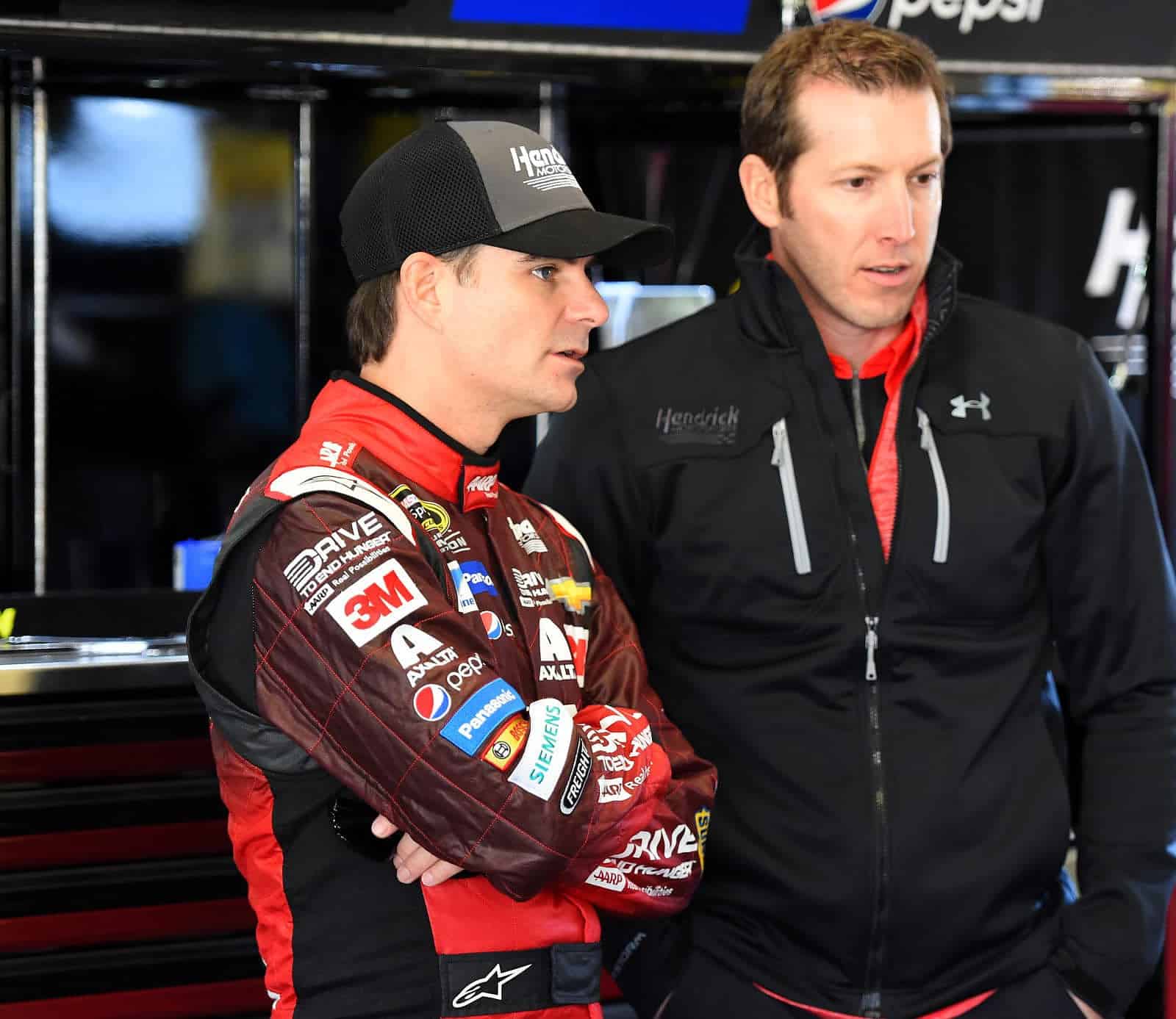 Sprint Cup: Gordon’s Farewell Begins; Qualifying Questioned: Jeff Gordon earned the pole position for the Daytona 500 next weekend in what amounts to a dramatic beginning to a final full-time season.  Doing so just means that Gordon further cements himself as one of the all-time greats, notching his 78th pole start.  Though his accomplishment might not mean as much at a restrictor-plate track as it may at others, it is still quite the way for Gordon to begin his final season.

While Gordon may be celebrating, Clint Bowyer is left shaking his head at a qualifying system that deserves further scrutiny.  As Bowyer was doing his best to qualify he ran upon an the injured car of Reed Sorenson who attempted to block Bowyer in the hopes of getting a push that would mean some modicum of success.  Instead, the two wrecked, ruining their cars, and putting more emphasis on the duels on Thursday.  Bowyer let his displeasure be known.

But Bowyer wasn’t the only one frustrated by the qualifying procedure at Dayton.  Kevin Harvick offered his disappointed thoughts for qualifying, wondering  why pack qualifying was used at a plate track — backing up the sentiments of most drivers following the fall race at Talladega.  Tony Steward, part owner of Harvicks’s ride, showed that he’s in midseason tempestuous form by following up his weigh-in anger by tweeting that NASCAR had basically wasted the efforts of everyone at the shop by running this format.

The season hasn’t even begun and already it feels like things had never stopped.  Huston Ladner

NHRA: Schumacher Doing Well Thanks to Early Diagnosis: Regular NHRA viewers may have noticed something missing last week at the Winternationals in Pomona. Team owner Don Schumacher and his familiar red shirt were missing from the starting line. Schumacher was diagnosed with early stage cancer at an annual physical just after the end of last season and underwent successful cancer surgery in November.

He’s not traveling with the team at the moment as he completes radiation treatment, but he was in touch with his teams by text message over the weekend and is doing well.

The same week Schumacher learned of his diagnosis, DSR Funny Car driver Ron Capps was undergoing surgery to repair three torn triceps muscles discovered after he went to see a doctor for pain in his arm. Earlier in the year in March of 2014, Capps and his family also had a close call when his son, 13-year-old Caden, was diagnosed with Ewing’s sarcoma, a rare form of bone cancer.

Capps took his son to the doctor when he experienced back pain after playing baseball that did not go away. Ultimately doctors were able to remove one rib where the problem was centered and Caden did not have to undergo radiation. He requires regular scans, but so far he’s remained clear.

These successful outcomes stressed to Capps the importance of catching problems early thanks to regular physicals and not waiting to see a doctor when something is out of the ordinary, a cause he intends to champion throughout the season.

“That brought us to our knees when we found out Don had cancer, but he caught it early enough because his annual physical was the week after Pomona,” said Capps. “We also caught Caden’s problem early enough that he was diagnosed before it progressed. One thing I’m going to stress this year at every opportunity is the importance of regular physicals and not putting off getting a problem checked out by a doctor.” -Toni Montgomery

Camping World Truck Series: Season Opener This Week – After nearly three months of sitting idle, the Truck Series will come out of hibernation on Friday night for the season opener at Daytona International Speedway. With a reduction in field size from 36 to 32 and around 30 teams committed to a full season, with the sponsorship to back it, qualifying will be much more crucial to weekend success. Add in the changes to qualifying that will place more of an emphasis on speed, and this season looks to be one of rebuilding.

Anyone who paid even the slightest bit of attention to the series last year saw the short fields and the large percentage of start-and-park teams. Fast forward to the 2015 season, and at least on the surface, it looks like the rebirth of a series. Sure, it’s not likely we’ll have 40+ truck attempting to qualify soon, but despite the loss of three trucks in the dissolution of Turner Scott Motorsports, there’s plenty of hope to have full fields all year and very few start-and-park teams.

On track action begins with a lone practice session on Wednesday, followed by a pair of them on Thursday. Friday, the series will qualify in the afternoon before taking the green flag to begin the 2015 season. Race coverage begins at 7:30 p.m. ET on FOXSports1. For a more in depth look at this season, don’t miss Truckin’ Thursday. -Beth Lunkenheimer

Short Tracks: The 49th Annual World Series of Asphalt Stock Car Racing started off Friday with the official results being decided similar to recent years, in post-race technical inspection.  The opening night festivities at New Smyrna Speedway, only 15 miles from the World Center of Racing, saw Spencer Davis and Ryan Preece cross the line first in the Pro Late Model and Tour Type Modified features, respectively, only for their wins to be taken away due to the weight of their cars being deemed too light.  The disqualifications handed the victories to young Texan Derek Scott Jr. and 2014 Richie Evans Memorial 100 winner Justin Bonsignore.

The short track action continues at the half-mile facility through Saturday night with various touring series and longer distance features for the nightly divisions being highlighted each evening. -Aaron Creed

Xfinity: Small Names Getting Big Breaks: It’s about time that talented drivers are getting solid rides by earning it instead of paying for it. HScott Motorsports with Chip Ganassi signed Brennan Poole to run 15 events in the XFINITY Series. Splitting the ride with Kyle Larson, that will take Dylan Kwasniewski out of the equation.

Kwasniewski, who has a multi-year driver development contract with Ganassi, is only going to run a handful of events. Well, that’s the plan as of now. But the move is solid for the No. 42 team. It gives the XFINITY Series another driver that runs at 110 percent, and has experience racing with limited sponsorship. In 35 ARCA Series events, Poole has six victories, 18 top fives and 27 top 10s. Racing full-time last year, Kwasniewski earned a mere three top 10s, but teammate Larson two wins and an average finish of 8.4 in 28 starts.

The opportunity is the best Poole has been given in his young career. With fellow Venturini Motorsports teammate Justin Boston getting the call to run full-time for Kyle Busch Motorsports in the Truck Series this year, it has shown what the powerhouse ARCA team can do for young, talented drivers. Although this takes out a K&N Pro Series champion, it enables someone that has worked through the ranks without being spoiled, which is seldom these days.

Along with Poole, another young driver is getting the chance of a lifetime. Though it isn’t with a top team, Jimmy Weller will run a handful of XFINITY Series races this year. After nearly getting killed in a crash a few years ago, he has run 15 Truck Series equipment. Running with SS Green Light Racing, he hasn’t had the best of equipment, but he has the chance to run inside of the top 25 in NASCAR’s second-tier division, which is something to cross off his bucket list.  Joseph Wolkin

NASCAR claims the fans want this form of qualifying at RP tracks yet most that I read comments from say the exact opposite. So, you fans that think this is great, please speak up.

I thought the qualifying at Daytona yesterday was the dumbest thing I’d seen from NASCAR in a while. Isn’t this what didn’t work at Dega last year? So, the smart boys at the beach brought it to Daytona, too? Wow, yes, well of course they are just brilliant! NOT even close.

I had turned it off because I was so annoyed and frustrated when I tried to watch it. I didn’t know Gordon had won the pole until I saw it on twitter.

NASCAR is full of crap – they have no clue what the fans want and I am completely over them saying that they know best. The suits just keep throwing things against the wall trying to see what sticks.