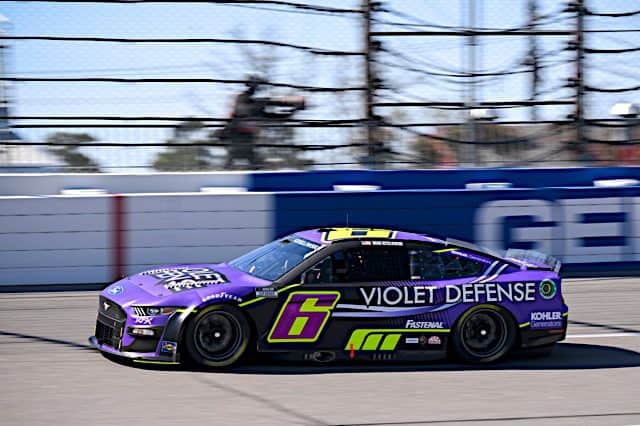 To determine the top 10 NASCAR Cup Series paint schemes of the season, several members of our staff cast their votes on their favorite paint schemes of 2022. Schemes with multiple mentions were then taken and tallied from greatest to least to give us the top 10.

Every sport has that tradition or item that catches everyone’s eye. In basketball, it’s the jersey. In football, the helmet. Baseball? Ballpark.

However, NASCAR’s fans have a love that is different from any other sport: paint schemes.

Dozens upon dozens of NASCAR Cup Series schemes alone took to the track this season. Cup designers were challenged to work with a new canvas, as NASCAR pushed the numbers forward with the arrival of the Next Gen car.

Still, plenty showed their creativity extends beyond the limits, and many continued to wow fans week in and week out.

With that, here are Frontstretch’s top 10 schemes of the 2022 season.

After Team Penske broke out a black alternative to the red Advance Auto Parts scheme last year, the team opted to go back with a black base for the 2022 season … and boy, did it deliver.

While the scheme was simple, it is simplicity that can often appeal to the eye the most. Ryan Blaney‘s No. 12 ride featured a shadowed checkered flag on the hood, mirroring the trademark flag in Advance’s logo. The Advance logo on the side was tilted enough to make the car look fast, and it was easy to follow from front to back. After a few races with a yellow number, the team changed it to chrome red, making it look even better.

A version of the scheme has been done before, but Spire may have mastered it. LaJoie’s No. 7 preceded two more smaller sevens to imitate Robbins’ No. 777 Plymouth Belvedere in the Grand National Series. The car was detailed with LaJoie’s name, similar to the placement of Robbins’ name on the car, and sponsored by LaJoie’s podcast, Stacking Pennies. The pink and yellow mixed perfectly, making this one of the most memorable throwbacks of the year.

Dixie Vodka has been been a sponsor for Cole Custer and his Stewart-Haas Racing No. 41 for the past two seasons, sporting several looks to the ride in that span. Its scheme at Homestead-Miami Speedway stood out in particular.

Custer’s No. 41 was one you could not miss on the track. While it was an eye-popping scheme, the colors meshed enough to where it did not overwhelm fans with the variegated scheme. Perhaps the most clever touch to the scheme was its taste of Miami, featuring the Miami Vice colors and palm leaves. It was an unforgettable scheme for both that race and the 2022 season.

Bringing the heat to Homestead. pic.twitter.com/rfkHY3gpFj

It is no secret that the state of Texas brings the heat, and the same can be said for the scheme Trackhouse Racing Team brought for Daniel Suarez at Texas Motor Speedway.

Sponsored by Minute Maid Aguas Frescas, the car had a refreshing theme to it that made me want to grab one myself. It was another car with several colors that certainly attracted eyes but also didn’t throw too much onto one car. Designs of mangoes, strawberries and hibiscus flowers matched the promoted products to give this scheme extra points. And that panther behind the number? That was the cherry on top.

Good points day for our 99 @MinuteMaid Aguas Frescas Chevy team. Just didn’t have pace in stage 3 to close out w/ a better result. We’ll keep working hard 💪🏽 GRACIAS to all my amigos at the track – I saw so many 🇲🇽 & 99 flags. Thank U for the love & support!🙏🏽 @CocaColaRacing pic.twitter.com/2iO86HrvdY

Put the No. 3 on a black base, and you have already won the hearts of many. Add some flare to it with a hint of Miami Vice and palm leaves, and now you have really done the trick.

Dillon’s scheme was adorned with neon palm trees in pink, teal and blue. Shadowed into the scheme were even more palm leaves.

In support our partner Huk’s effort to build back after hurricane Ian, RCR will donate 10% of the winnings from the No. 3 car at Homestead-Miami.

Maybe it is nostalgia talking considering the fact we will not see M&Ms on a car for the foreseeable future, but who is going to let that stop us? M&Ms has been a fan favorite for decades, and the sponsor took its final bow in 2022.

For the past decade and a half, M&Ms has been synonymous with Kyle Busch and Joe Gibbs Racing. For the last few seasons of their partnership, the scheme remained largely unchanged — which is, quite frankly, how it should have been. Just as we remember Jeff Gordon for the Rainbow Warrior ride or flames, Busch will likely be remembered for his popular M&Ms rides.

JGR and M&Ms wrapped up their final season together in style with a twist brought on by the shifted number placement. With the beloved M&Ms characters on the doors, it was another classic scheme that will be remembered for generations.

Brad Keselowski‘s move to RFK Racing helped revitalize the organization. That included the paint schemes, with a new No. 6 font and several amazing schemes to go with it. His Violet Defense ride in particular became an instant favorite.

With the recognizable purple base for Violet, RFK made the scheme pop with a neon yellow trim. In some ways, it almost looked like a Los Angeles Lakers scheme. The team also took advantage of NASCAR allowing chrome numbers, finishing the scheme off with a brilliant chrome purple number.

Through our bracket challenge, y'all have voted @keselowski's @VioletDefense Ford Mustang as the Best RFK Racing Design of 2022! It was a close race, but this fan-favorite takes the cake 🍰 pic.twitter.com/mac8gjumnR

OK, we knew it had to come eventually — yet it still rocked the NASCAR world to its core. The Jeff Gordon flames scheme returned in 2022. Other teams in lower series have thrown back to the ride, but having it in the No. 24 Cup car is like putting Aaron Judge on the field with Babe Ruth.

The shifted number placement proved very little hindrance to the scheme, as the metallic blue worked its same wonders that it did when Gordon was wheeling the ride. Add in the classic flames and it is no shock that this was one of the best schemes of the year. It nearly ended up in a familiar spot called victory lane, too.

Race Recap: @WilliamByron ends up 13th at Darlington after getting bumped from the lead

The throwback theme continues with a scheme that had fans losing their minds on social media after the reveal.

We can drink (@CocaCola) to this 🥤 pic.twitter.com/6plQyYdxuP

When it was announced that Michael Jordan would be partnering with Denny Hamlin to form 23XI Racing, concept designers immediately put their dreams into work with Jordan-branded schemes. They got their wish at Kansas Speedway in the spring when Busch sported the look on his No. 45 Toyota.

Sporting the Jumpman logo on the hood, Busch’s ride flashed an elephant print on the sides of the car. Paired with red and black trim, the shoe-inspired car was an instant hit.

Not only is it No. 1 on this list, but it also reached victory lane, as Kurt Busch dominated en route to a first-place finish.

Had we added in the NASCAR Xfinity and NASCAR Camping World Truck series, it would be nearly impossible to put a top 10 together. That said, those series deserve some love too for some brilliant schemes on the track this season.

There was a plethora of schemes to choose from for this, but this design kept coming back to my mind. It may not be the most recognizable scheme from 2022, but it was a clean one that blended colors in a strong way. Alpha Prime Racing delivered some mean schemes in its first season, and this one was the best in show.

Really fun race yesterday start to finish. We had good speed, handled well, made some exciting moves on restarts, and passed a lot of cars. Another race that we should’ve battled for a top-10 in the closing laps if it weren’t for some bad luck. We’ll get that finish in Phoenix! pic.twitter.com/AkCTO6qPvl

Carson Hocevar and Niece Motorsports had some of the best schemes of the 2022 season, but his throwback was on another level. Hocevar threw it back to Travis Pastrana at Darlington, with a shadowed No. 1 and other figures embedded in the scheme. The orange number and trim made the scheme pop, cementing it as one of the hottest designs to hit the track this season.

hey, @TravisPastrana, what do you think? pic.twitter.com/xnJ5zsWZ5W

Can’t disagree with those picks.