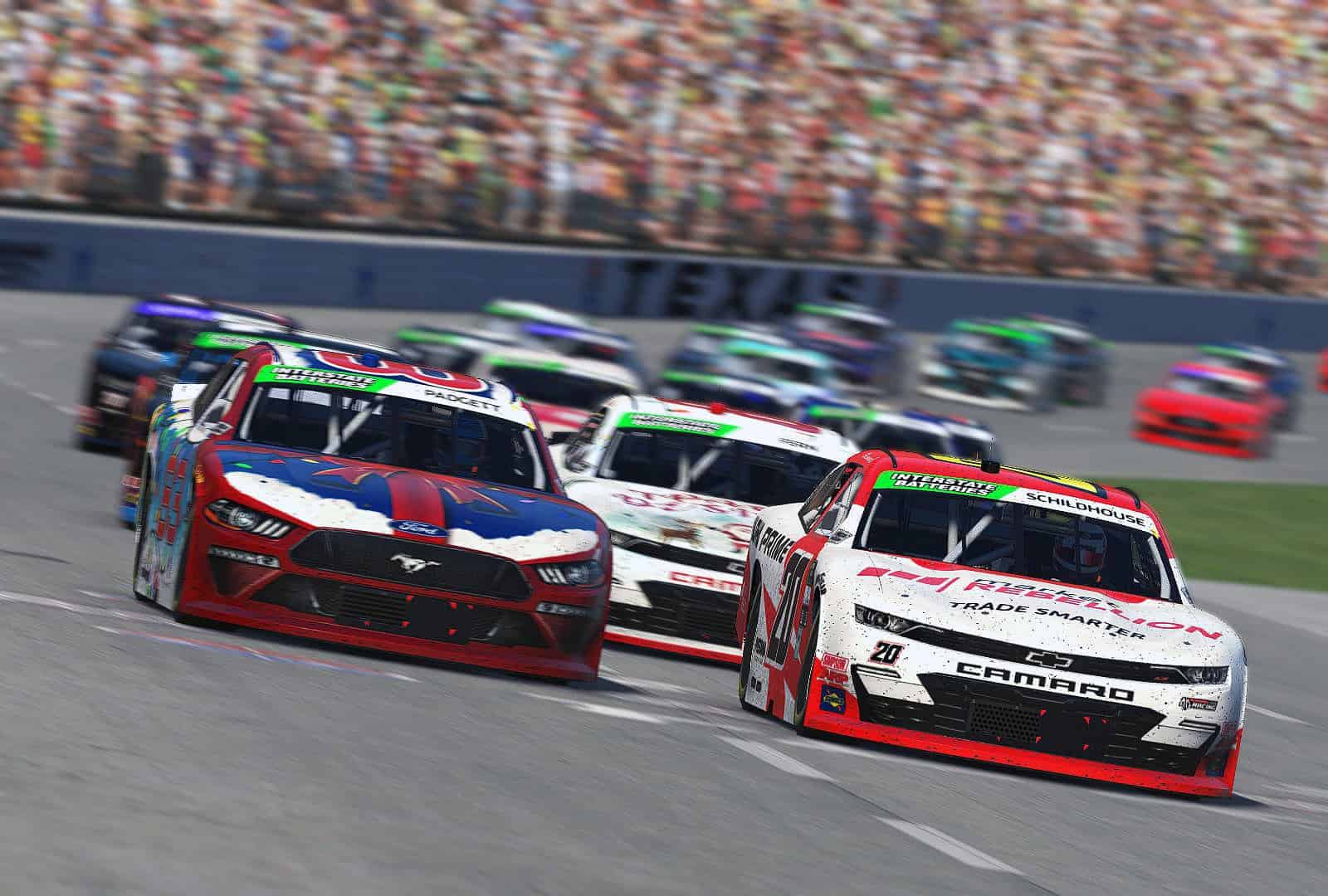 On Monday, Nov. 28, the Interstate Batteries Monday Night Racing Pro Series ran its fourth race of season six with the running of the Operation Christmas Child 300k in NASCAR Xfinity Series cars at Legacy Texas Motor Speedway. David Schildhouse picked up his first win of the season and the sixth of his MNR career in one of the closest finishes in series history, edging out Joey Padgett.

Check out the race recap from Frontstretch’s Joy Tomlinson here. You can also view the full race broadcast, along with the Frontstretch post-race show featuring Brandon Hauff and Michael Massie, on the Frontstretch YouTube channel here. Now, here are five points to ponder from Monday’s race:

1) The Resilience of Schildhouse

Schildhouse’s sixth MNR win may have been the toughest one yet. Adversity struck before the race even started when Schildhouse burnt his right hand while cleaning the stovetop in his kitchen. With his hand bandaged up, Schildhouse nonetheless gripped his steering wheel and took to the virtual 1.5-mile track.

“[Michael] Jordan had his flu game, Schildhouse had his burnt-hand race, and it worked out,” Schildhouse said jokingly afterwards.

Burned my right hand on a hot stovetop burner, AMA. @MonNightRacing should be even more fun tonight! pic.twitter.com/GC5x6WP4Mt

After qualifying a solid but unspectacular 15th, Schildhouse became one of many victims of the big wreck on the backstretch at lap 16, sustaining significant damage.

“So, I had to take my quick repair, and I knew it was going to be an uphill battle, and at some point, I was going to have do something to flip the field position,” Schildhouse told Frontstretch.

Schildhouse would stick around mid-pack during the long green flag before gaining track position via pit strategy. He took the lead after staying out on lap 77 and eventually restarted in the lead with a mere 12 laps to go.

At that point, misfortune pounced again, with a bad restart forcing Schildhouse back to third for the final restart with five laps to go. Schildhouse believed he should have gotten the lead back, but race control Josh Mendoza disagreed. Although Mendoza did penalize Carson Hocevar with an EOL penalty for jumping the restart after he pushed Padgett to the lead.

“Carson [Hocevar] fired before anybody else in the whole field and pushed Joey [Padgett] past me,” Schildhouse said. “I was third or fourth by the time we got to the line. Obviously, you can’t have that. Carson had the best tires out of anybody up here. He didn’t need really need to do that or try to game the system at all.”

Putting that behind him, Schildhouse buckled down for the final five laps and put pressure on Padgett. Coming into turn 3 on the last lap, Schildhouse got to the inside of Padgett and then got the run off of turn 4 to win by a half a car length, a finish reminiscent of Elliott Sadler and Kasey Kahne at Texas in the NASCAR Cup Series in 2004.

WOAH HOLD UP WAIT A MINUTE.
Season 1 Race 14 – IndyCars at Talladega would like a word!!!! https://t.co/Iia55LDdPB pic.twitter.com/1Dv36pMgk8

“That’s an all-time classic right there,” Schildhouse said. “This is probably my favorite win in Monday Night Racing of all time.”

Career win #6 in @MonNightRacing was an instant classic and one of the greatest finishes in MNR history! Locked into the playoffs and trophy hunting once again!

2) Feast or Famine for NASCAR Drivers

The field featured several NASCAR regulars, some of whom had solid finishes while others had races they would just as soon forget.

Garrett Smithley, the winner at Talladega Superspeedway, continued his solid start with a fifth-place finish, while NASCAR Xfinity Series driver Alex Labbe netted an eighth-place showing. Ryan Vargas just missed out on a top-10 in 11th, while Rajah Caruth sat on the pole and then rebounded to 13th after falling through the field early.

On the other hand, Anthony Alfredo’s night ended before it even began due to trouble connecting to iRacing. Alfredo was able to run only a few laps early before being forced to park it and settle for dead-last in the field in 43rd. Cup and Xfinity Series driver Josh Bilicki ended up 38th after wrecking on the next-to-last restart with Max Kennon.

Well, looks like no @MonNightRacing tonight for me due to some strange connection issue 😔 One of my favorite car and track combos too.

However, the most up-and-down race by far belonged to Hocevar. The full-time Craftsman Truck Series driver charged quickly from his starting spot of 12th to contend for the lead. Hocevar appeared to have one of the fastest, if not the fastest, car in the field. With 12 laps to go, he was sitting pretty in fourth place with fresher tires than the top three.

Then, race control ruled that Hocevar jumped the restart from the second row and would have to go to the back of the field as a result. In response, Hocevar parked his car on the frontstretch while the field was lining up double-file for the ensuing restart and got hit by Brett Baldeck, who couldn’t swerve out of the way in time.

Mendoza did not think highly of that move and booted Hocevar from the race, relegating him to a 37th-place finish. Hocevar has since been removed from the league by MNR league owner Ford Martin after causing issues up front two weeks in a row.

3) The Importance of Pit Strategy

With a 14-gallon fuel load and significant tire wear, it was expected going into the race that pit strategy would be a key factor, and that was certainly the case.

When the race restarted on lap 19 following the Big One on the backstretch, it marked the beginning of a 57-lap green flag run that forced the drivers to go a long way on worn tires and burn up their fuel before pitting under green.

When the second caution flew on lap 76, the field began to break up into numerous pit strategies. Many of the leaders pitted for fresh tires while some mid-pack drivers like Schildhouse opted to stay out, hoping for short green flag runs to maintain their track position.

That is exactly how the second half of the race played out, with six yellow flags in the final 49 laps of the race. This played into the hands of those who stayed out on older tires. Between pit strategy and wrecks, there were several comers and goers through the field as the laps wound down.

At the end, the older tires of Schildhouse and Padgett held off the fresher rubber of those who pitted with just 16 laps left. Pit strategy and decision-making should continue to play a huge role in determining race winners and ultimately the season six champion of MNR.

With Legacy Texas in the rearview mirror, MNR is now halfway through the eight-race regular season for season six. The series now heads to the fabled Indianapolis Motor Speedway to drive IndyCars.

The first four races of the season have featured four different drivers winning and locking up their spot in the MNR season six playoffs. The points battle is air-tight, with Padgett snagging the points lead, followed closely by the past two champions Presley Sorah and Adam Cabot both just one point back.

If the race winners and points positioning are any indication, then this season may well be the most wide-open and competitive season of MNR yet. Schildhouse commented on the depth of the MNR field on the Frontstretch post-race show.

“I think this is the most competitive roster that Monday Night Racing has put together yet,” Schildhouse said. “That’s going to require everybody that’s serious about this championship to step their game up a lot.”

As the regular season progresses into its second half, will we see clear-cut favorites emerge from the pack, or will parity continue to reign supreme on Monday nights? Can Schildhouse or another previous winner repeat? Will veterans like Sorah and Cabot find victory lane, or can a rookie like Padgett capture their first MNR checkered flag?

In addition to the competition on the track, MNR also put on a charity donation drive with race sponsor Operation Christmas Child (OCC), an initiative of Samaritan’s Purse.

– Fans will be able to vote on their favorite scheme by donating.

OCC collects shoeboxes filled with school supplies, toiletries, and toys and gives them out to less fortunate children around the world during the holiday season. On their website, OCC’s mission statement is to “demonstrate God’s love in a tangible way to children in need around the world” through their gift-filled shoeboxes.

MNR pledged $3,000 to OCC before the race, and it is holding a donation drive to raise more money for the cause. Several drivers sported special Christmas-themed paint schemes for the occasion. For example, Massie’s No. 27 Frontstretch Chevrolet designed by Jared Haas was based on Brad Keselowski‘s 2019 Miller Lite Holiday scheme and featured Frontstretch Podcast host Bryan Nolen as an elf on the side.

Here’s my entry for the holiday themed race this Monday night! Look at this @Frontstretch @keselowski throwback designed by the ultra talented @RealJaredHaas.

Fans can vote for their favorite scheme when they donate to OCC. If you want to donate to MNR’s OCC fundraiser, then click here.

Here's a few paint schemes for tonight's Christmas themed race at @TXMotorSpeedway benefitting @OCC_shoeboxes.@MonNightRacing is committed to donating $3,000 and we'd like for you to add to our total🙏