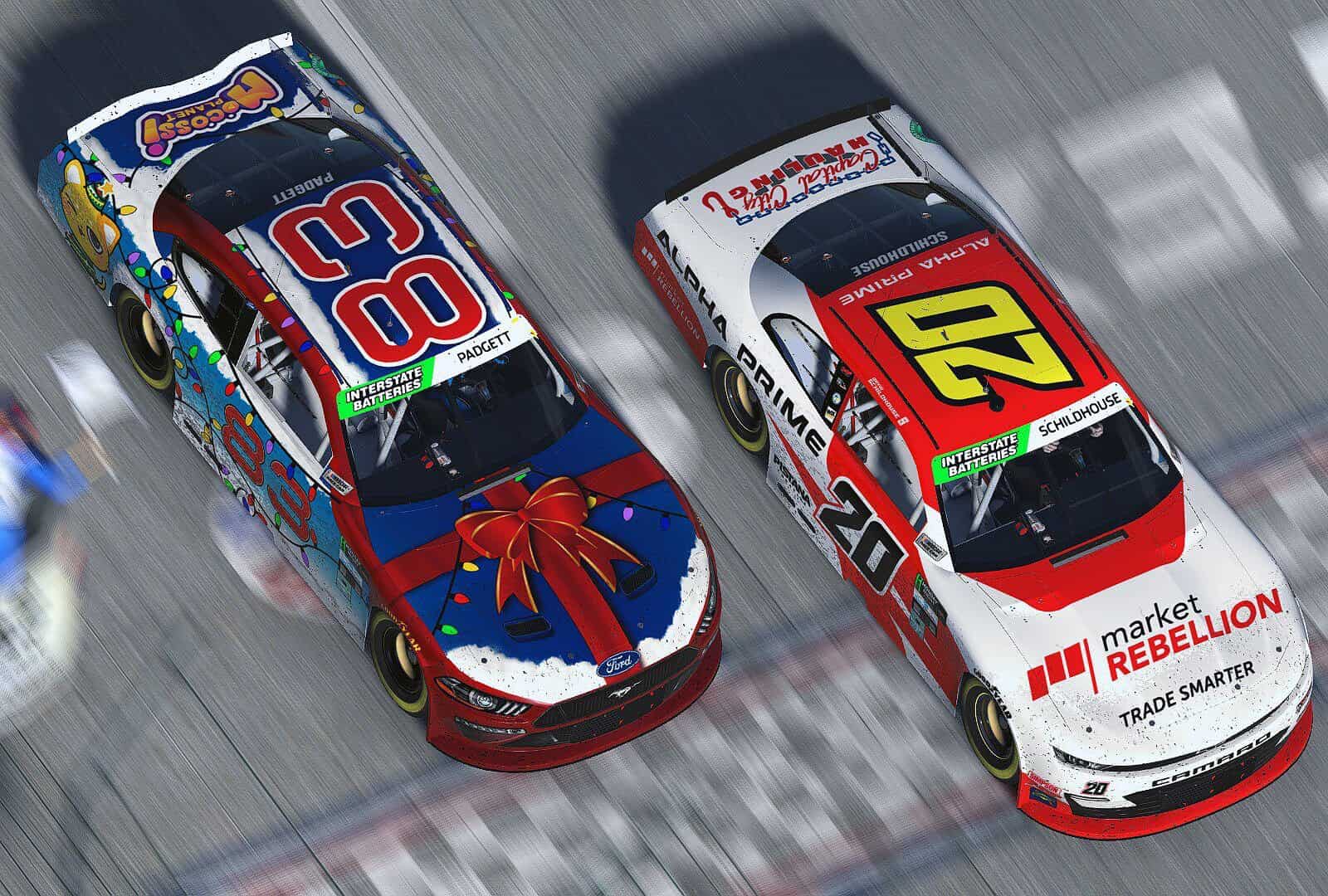 Schildhouse, who was on a different strategy than much of the field, ended up behind Padgett after a late-race restart. Carson Hocevar had pushed Padgett ahead of Schildhouse on the restart when Schildhouse was the leader. Race control reviewed what happened and black-flagged Hocevar, who was then parked after he stopped in the frontstretch and was hit from behind by Brett Baldeck.

Schildhouse, however, was able to hold off Collin Fern and bump Padgett’s damaged rear bumper just enough to take his sixth career win.

“It’s Monday Night Racing, baby, I don’t know what else to say,” Schildhouse exclaimed after the race. “That’s an all-time classic right there. … Shoutout to Joey Padgett, this dude’s gonna win a lot of races in this league, he’s so fast and I’m glad that we had a good clean battle. Shoutout to Collin Fern for the good battle there at the end as well. Unbelievable circumstances, crazy pit strategies. I wanted to be in a position to win it and now we’re going to the playoffs four races in, feels good to get that done.”

Schildhouse, who raced with an injured hand, joins Corey Heim, Garrett Smithley and Chase Cabre in the playoffs.

Padgett was second, Fern was third, DJ Cummings was fourth and Smithley rounded out the top five.

This version of Texas has an older, abrasive surface, which resulted in quite a bit of passing early on for these NASCAR Xfinity Series cars. Rajah Caruth started on the pole but quickly fell back, surrendering the lead to Nick Olsen. Reid Wilson grabbed first place on lap 3, while Bailey Turner got in front sometime later.

Then the Big One happened. So many cars, including Wilson, Robby Lyons, Fern, Schildhouse and Will Rodgers, got caught up in a big crash on the backstretch. Two cars even flipped as the track became a parking lot.

Just like Christmas in July, the Big One comes early in the #OperationChristmasChild300K at Texas!

Practically everyone involved used their fast repair after this melee.

Olsen restarted in front, but Turner went to the point and led for quite a long time through the first round of green flag pit stops on lap 56.

Unfortunately, Turner ended up in more trouble after he made his pit stop on lap 60 of the 125-lap race. He ran into the back of another car and spun into the inside wall.

The caution came out with about 49 laps left when Wilson was spun by James Bickford.

Schildhouse stayed out during this caution, though season five champion Presley Sorah got ahead on the next restart with about 43 to go.

Like the old saying goes, cautions breed cautions. Joey Savatgy crashed and Frontstretch’s own Michael Massie had a lot of smoke trailing from his car after getting caught up in the incident with about 30 to go.

Sorah pitted with most of the field, while Cabre stayed out with Caruth, Lyons, Padgett and Schildhouse.

After another crash, Schildhouse made a crossover move on Lyons for third place just before the caution flag waved again for another incident. The two in front of him pitted, leaving Schildhouse out front in the closing laps.

Schildhouse fought hard on the final lap to try to get to Padgett’s bumper and did so just enough to take the win at the checkered flag.

Next up, drivers head to the virtual Indianapolis Motor Speedway with the NTT IndyCar Series cars on Dec. 5. You can check out the live stream on Frontstretch’s YouTube channel or Podium eSports’ Twitch, and be sure to watch the post-race show from Brandon Hauff and Michael Massie.