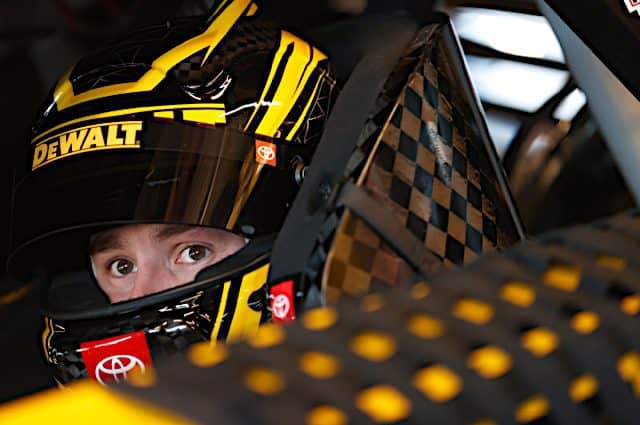 PHOENIX, Ariz. – Christopher Bell was the emotional favorite for some going into the NASCAR Cup Series championship race at Phoenix Raceway on Sunday (Nov. 6), and a freak accident on pit road might have thwarted those chances.

Instead, Bell finished 10th, third of the Championship 4 drivers.

News broke just prior to the green flag that Coy Gibbs, co-owner, vice chairman and COO of Joe Gibbs Racing and son of Joe Gibbs, had passed away.

“To receive news like that a couple hours before you get in the car is extremely tough,” Bell said. “Just really kind of puts it in perspective that what we’re doing here is not the big picture for sure.

“Yeah, just thinking of Joe. I just can’t imagine what Joe is going through and the entire Gibbs family. That’s the important piece.”

The news left a somber feeling throughout the garage, and rumors circulated as to whether some of the JGR and 23XI Racing cars would even race. Coy’s son Ty did not race, with Daniel Hemric piloting the No. 23 for 23XI instead.

“Myself and Denny [Hamlin] and I think the other JGR drivers were all in the same boat. We just didn’t know what to do. Then Dave Alpern [JGR president] actually came back to the racetrack right before we left for driver intros, and he told us that we need to go out there and race, and that’s what we did.”

Bell still had a championship to go for, riding the momentum of two wins when facing elimination in the playoffs. Bell’s crew chief Adam Stevens was going for his third career championship and his first without Kyle Busch.

“We just got the news so close to race time,” Stevens told Frontstretch. “It was beyond a shock. Not a single one of us had had a chance to process it. It was just, ‘Get through the day and just support each other,’ was the message.”

Among those on Stevens’ crew was Jackson Gibbs — the nephew of Coy and son of the late JD Gibbs — who serves as the team’s front tire changer. Despite the loss of Coy, Jackson still pitted the No. 20 on Sunday, with a tribute to his uncle on his helmet.

“I haven’t visited with him post-race other than just to give him a hug,” Stevens said. “But it’s a tough day for the Gibbs family.”

Early in the race, it seemed like the No. 20 was no match for Joey Logano. The Team Penske driver finished top two and well ahead of his championship rivals in the first two stages.

Logano lost three spots on pit road on the pit stop after stage two, though, allowing Bell to narrow the gap. Stevens then pitted the No. 20 earlier than his competitors in a cycle of green-flag pit stops, and Bell nearly cycled out in front of the No. 22.

The race’s final caution came out on lap 269, and during those pit stops, disaster struck for the No. 20 team. When jackman Caleb Dirks was putting on the left-rear tire, his finger got stuck between the nut and the spindle.

“It might be broke,” Stevens said. “He’s on his way to the care center right now. Just a really freak deal, hanging the left rear, his finger got stuck between the nut and the threads on the upright, which we’ve never seen before.

“I don’t know. We’ll have to watch the video and see if there was anything we could’ve done different. It ripped all the hide off his finger and probably broke it. It was physically stuck on there when they backed the nut back off.”

Frontstretch reached out to JGR, but no update on Dirks’ condition was available as of this posting.

The result was a slow stop for the No. 20, as Bell plummeted down the running order and out of the top 10. He recovered to finish 10th but was no match for Logano, who climbed his way to the front and won the race and the championship.

“There were a couple things that we definitely could have done different today, but ultimately the [No.] 22 was lights out all weekend, winning the pole and being super strong in practice,” Bell said. “We were just kind of playing catch-up, the rest of us were playing catch-up to him.

“The best car won the championship, for sure.”

“I think the season was successful,” Bell said. “To get to the final four is what every driver in NASCAR’s goals are. I’m very proud of that effort. With 40 or 50 to go, the last green-flag pit stop we put ourselves in position to race for it. You can’t ask for much more than that.

“Looking towards next year, I think we have potential to be stronger yet, and certainly we have room to improve at Phoenix. Yeah, I’m very content with where we ended the season and proud of the effort on this [No.] 20 car. I’m excited about the future with Joe Gibbs Racing.”

HHHMMMM…very misleading title. Not one lap led and the “finger incident” so late in the race. Very strange.

did they ever say how the guy was whose finger got caught up in the tire/gun deal? all i saw was him sitting on pit road with an ice bag.

what a day for the gibbs organization. condolences to all.

Agree the title is hyperbolic. Bell barely challenged before the incident and it is a stretch to blame his loss on the injured crew member. Although that slow pit stop was the torpedo that sunk his chances, those chances were already very low before the mishap.