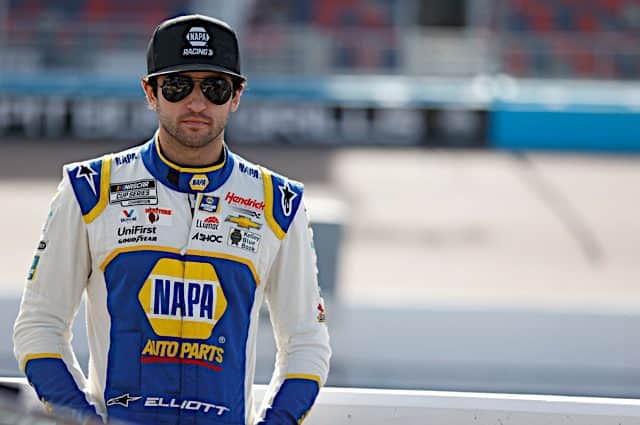 After the penultimate race at Martinsville Speedway on Oct. 30, he had a 98-point lead over Joey Logano in the full-season point standings. If there was no playoff system — just like the seasons before 2004 — Elliott would’ve been celebrating after Martinsville with a championship.

Instead, he was left empty-handed with a 28th-place finish at Phoenix Raceway.

A successful season for Elliott and the No. 9 was finished by running laps off the pace with a crippled car while Logano dominated en route to his second Cup championship.

It had been a rough postseason for the No. 9 team well before Phoenix. Elliott did add another win to his total, as he pulled off a win at Talladega Superspeedway in October after a last-lap pass on Ryan Blaney. But Talladega, a runner-up finish at Bristol Motor Speedway and a 10th-place finish at Martinsville were the only top-10 finishes he had in the nine races leading up to Phoenix.

Nevertheless, the No. 9 survived the Round of 8 to reach its third-straight Championship 4, and the struggles in the last nine races were no longer relevant. All the title contenders were once again at square one for the season finale under the Arizona sun.

Elliott showed long-run speed in practice on Friday (Nov. 4) and then followed it up by qualifying fifth on Saturday (Nov. 5).

The green flag waved on Sunday afternoon (Nov. 6), and Logano got out to an early lead in the first half. Elliott was hovering between sixth to 10th place throughout the first two stages, but he and the rest of the Championship 4 had no answers for the No. 22 car.

A dicey decision to pit under green for fuel in the second stage left Elliott a lap down for several laps, but he was able to unlap himself and end the second stage in 12th. Elliott’s biggest breakthrough came after the conclusion of stage two, as his pit crew had a fantastic pit stop to bring the No. 9 back into the ballgame for the beginning of the final stage. Elliott left pit road in sixth, and he was side-by-side with Logano in fifth on the ensuing restart.

The final stage went green on lap 193, but it didn’t last long as a multi-car crash broke out before a lap was completed. On that restart, Elliott got by Logano to take over the fifth spot. For the first time all afternoon, Elliott was the highest-running Championship 4 driver.

And then it all went awry.

The race restarted again on lap 200 with Ross Chastain right behind Elliott on the inside line. Chastain had a run and moved to the inside of Elliott through the dogleg, but Elliott tried to block Chastain’s advance when the No. 9 wasn’t clear. Elliott then spun off of Chastain’s bumper and into the inside wall.

A look at the contact between Chase Elliott and Ross Chastain from Ross’ view.

The damage was significant, and Elliott fell a lap down as his pit crew made repairs. The car reached minimum speed, but it became abundantly clear that the No. 9 was well off the pace. Elliott restarted the race in 30th, and he was unable to make up any ground as his car was running laps about a second slower than the top 10 cars. He later fell two laps down to Blaney on a long green-flag run, and he never caught a break with a timely caution.

Elliott ended up finishing about the same, as he ended up in 28th, two laps down after 312 laps of racing.

During his post-race press conference, Elliott largely avoided answering questions about the contact with Chastain.

“I’m not sure [about the incident],” Elliott said. “Looking forward to the offseason, and really proud of the fight that our team put in today. I felt like we had peaked right there before we crashed. We got our car driving pretty good, we just had our best pit stop of the day, so that was all really solid. In fact, we were right there next to the No. 22. So yeah, thought we had a shot at it, all the way up until we didn’t.”

Elliott was later asked in the media center as to why he didn’t wreck Chastain after the contact. Once again, he gave a non-answer about the incident.

“Yeah, like I said, just proud of my team, appreciate the effort that they put in these last nine weeks,” Elliott said.

While Elliott largely shied away from the incident, Chastain said that Elliott turned down on him.

“With the No. 9, I felt like I got position to the left side in the dogleg, and he turned left.” Chastain said.

Whatever the case, the result was the same: a terrific season that came up just short of a championship.

Not a fan of Chase Elliot’s lame duck comments, esp in the chase. He was seen being pretty angry with the media wanting them to go away, and has dodged questions like this several times now. Very disingenuous.

No fan of Clyde’s but he congratulated Logano for his win, that was a nice thing to do. Give credit where due. “The Big Three” in 2018 did no such thing. Classless aholes, given their ages should have had class!