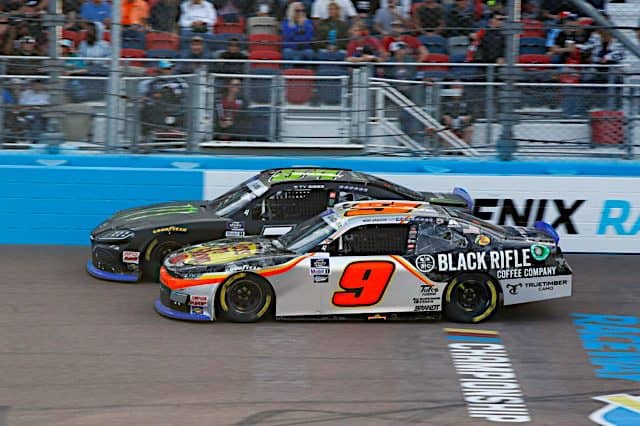 PHOENIX — Noah Gragson charged to the front in the final laps of the 2022 NASCAR Xfinity Series Championship Race. As the laps wound down at Phoenix Raceway, he closed in on the back bumper of Ty Gibbs’ No. 54 Toyota.

The two rivals seemed destined to end the best event of the weekend thus far side-by-side, fighting to the checkered flag banging together in a shower of sparks.

But as Gragson might say himself, that was “fantasyland.” Once he closed to within a couple of car lengths, the No. 9 JR Motorsports Chevrolet stalled out. Gibbs simply had more speed most of the night, winning the title with 125 laps led while Gragson had to settle for second.

What happened next was a handshake, not more hatred, the JR Motorsports driver acknowledging his defeat and respecting the way Gibbs raced clean throughout the night.

“Because they did a good job,” Gragson said, matter-of-factly, about showing respect after a week of harsh criticism over Gibbs’ driving at Martinsville Speedway. “They beat us.”

That they did. Throughout the race, Gibbs never really stumbled at any point, while the JRM triumvirate made some crucial mistakes. For Gragson, it was nine spots lost on pit road, combined with a late-race engine problem for Justin Allgaier and Josh Berry nearly spinning out on a restart, dropping back to 21st and out of contention.

A poor stop at the end made Gragson charge up from eighth. But he insisted that didn’t keep him from a championship.

“We still had laps left, and we still had opportunity,” Gragson said. “We weren’t wrecked. We weren’t in the garage.”

In the end, it all just wasn’t good enough. Everyone at JRM, from team owner Dale Earnhardt Jr. on down, had to process getting beat, losing a 3-out-of-4 shot to leave with the championship.

Meanwhile, as Gibbs celebrated the title, there were a shower of boos raining down on him from the stands at Phoenix. Nothing he could do or say would stop them from coming, even a direct and consistent apology.

“The mistakes I made last week were completely unacceptable,” Gibbs said. “The only thing I could do this week is come back and win.”

Gragson, former bad guy of the Xfinity Series, could only watch his replacement in the role clutch a trophy he so desperately wanted to win.

Can that success be a turning point for Gibbs? Gragson reminisced about his own journey, hoping for the best for his rival while making clear you can still have a healthy respect for someone else — and strongly dislike them.

“I used to be buddies with him when he was younger,” Gragson said of Gibbs. “You know, probably three, four years ago, he was a super cool kid. He really was. But I don’t know, it’s just kind of changed over the last couple years, and I’ve told him that, and he knows that.

“I don’t want to really go into much more detail about that out of respect for him and whatnot, but I told him that hey, you used to be a super cool kid and you kind of turned into a little bit of a douchebag.

“There’s your quote, your headliners.”

With that, both men now move forward, likely Cup rookies in 2023. Gragson’s deal has already been announced, moving on to the No. 42 of Petty GMS while leaving the comfy confines of JRM behind.

“For a young guy like myself who’s moving up to the Cup level, it’s going to be a rude awakening,” Gragson explained. “It really is. [JRM teammate] Justin [Allgaier] knows the difference between Xfinity and Cup racing; everybody is good. Every lap, every restart, every trip down pit road, every single time, everybody is good in the whole entire field. You’re not racing 10 guys, you’re racing 30 guys, so it’s a lot harder.

“There’s definitely going to be challenges. There’s going to be adversity. It’s not going to be easy, and we have our work cut out for us. … I really do feel like the sky’s the limit with [Petty GMS], and we’re going to have to work hard. There’s no doubt about that. But excited for the opportunity.”

This year especially, the body of work justifies a promotion: eight wins, 25 top-10 finishes and over 1,000 laps led (an accomplishment Gragson got excited about as I pointed it out). The growth was palpable.

It just didn’t end with the hardware everyone expected at JRM. But in remaining even-keeled, honesty mixed with honest reflection, Gragson showed even in defeat he was ready to graduate to the next level.

“I felt like last year I was way more mad just because … I think this year, I did my absolute best,” he said. “Like I can lay my head down after restarting eighth with 25, 30 to go and getting up to second and almost having a shot to win the race.

“I’m content with that. I don’t think the driver a year ago, two years ago, three years ago would be able to do that. I did my absolute best. I drove my ass off. I tried my best and gave it everything I had.

So he shakes The new Champions hand and then refers to him as a douchebag. Real classy. Noah will be eating a lot of exhaust fumes in the foreseeable future and I’ll enjoy seeing that. His time to be a big fish is over.

Noah could have a slice or two of humble pie. And Noah ” Quit the fat Elvis imitation.”

Noah hardly came from poverty but he probably knows an anguish Gibbs won’t ever experience. I rewatched Tys Jr download episode. What seemed cute at the time was obviously phony as heck. “Coachie”” my ass.

Gragson was born into wealth but that doesn’t translate into class. He’s a totally self absorbed bum.

To me just because you were born into money doesn’t automatically make you spoiled or untitled.when Chase Elliott started racing i tried as hard as i could to dislike him bc i thought that he was just another privileged rich kid with his dads last name. But as much as i hate hendrick moter sports im ok with elliot winning. He seems like a humble adult and i can live with that.

Isn’t calling someone a D-Bag just as bad as the N-word. It is an insult to women and their hygiene products.