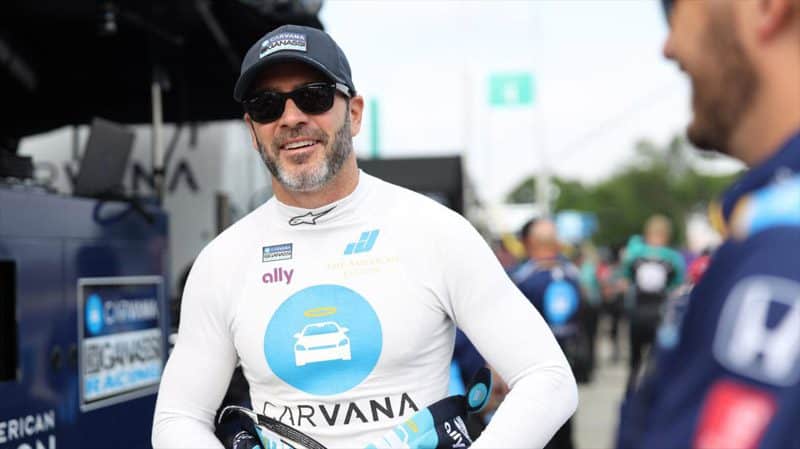 Jimmie Johnson will return to NASCAR after two years of competing in the NTT IndyCar Series, announcing Nov. 4 he has bought into Petty GMS.

In addition to his new role as co-owner, Johnson will run a part-time Cup slate in 2023, beginning with the Daytona 500 at Daytona International Speedway.

The exact number of races, car number, crew chief and sponsorship for Johnson was not announced.

“I am excited to announce I’ve entered into an ownership agreement with Petty GMS,” Johnson tweeted. “I will be running a limited schedule in 2023, starting with the Daytona 500. I’m incredibly excited to be returning to my NASCAR family and look forward to building upon the combined legacy of our team.”

“It’s great to be back in NASCAR,” Johnson added in a team statement. “When the IndyCar season ended, I started on this journey of what was next. Maury [Gallagher, team co-owner] and I connected, this opportunity came to light and it’s the perfect fit for me. Team ownership makes so much sense at this stage of my career and after spending time with Maury and his family, talking with Mike (Beam), Dave (Elenz, crew chief of the No. 43) and Joey (Cohen, director of competition and engineering), I realized this was something I wanted to be involved with from both the business perspective and on the competition side.

“If I’m going to commit to something like this, I want to make a difference and have something tangible to show for it when it’s all said and done. So, this opportunity with Petty GMS is all of that and much more.”

“I couldn’t be happier to have Jimmie Johnson joining Petty GMS,” team owner Maury Gallager said. “We have been consistent since we began our Cup effort last year in wanting to be up front and have a winning program. No one in the modern era of NASCAR has won more than Jimmie. Having a driver, the caliber of Jimmie, driving our equipment and being able to provide feedback to our crew chiefs and engineers but most importantly, mentoring Erik and Noah will be invaluable.

“Perhaps most important of all, Jimmie will be a great partner. I know I speak for all the Petty GMS team members, including Richard Petty, in welcoming Jimmie to the team. No one else will be able to say they have two seven-time Cup champions on their team. We are looking to make a strong statement next year and show that we are here to contend for wins and championships. I can’t wait to see what we can achieve together.”

“What an exciting time for Petty GMS,” team chairman Petty said. “This year we’ve accomplished so much together with Maury and now adding Jimmie will only continue to help us grow. To have Jimmie – another seven-time champion – as a part of the team, and his abilities both on track and off will be special for Petty GMS. I’m looking forward to having him as a part of our team and seeing what we can build together.”

Petty GMS Motorsports will field two full-time entries in the Cup Series in 2023. Erik Jones reprises his role in the No. 43 Chevrolet and Noah Gragson graduates from the NASCAR Xfinity Series to take the reigns of the No. 42 Chevrolet.

This season, Jones earned the organization its first victory since Gallagher bought an ownership stake in the team when Jones won the Cook Out Southern 500 at Darlington Raceway.

The 2023 Daytona 500 will be Johnson’s first Cup start not driving the No. 48 Chevrolet for Hendrick Motorsports.

“This is a tremendous day for our sport,” HMS team owner Rick Hendrick said in a statement. “Jimmie is one of the all-time great champions on the racetrack, and I know he’ll apply the same mentality to his role as a team owner. When he sets his mind to something, the level of commitment and work ethic he brings is unsurpassed.

“Seeing Jimmie in a firesuit with his name on the roof of a Chevrolet at the Daytona 500 is going to be very special for a lot of people. Competing against him will certainly be a change, and a big challenge, but we welcome his return to NASCAR and look forward to the next chapter of a truly remarkable career.”

i wonder if they will drop their alliance with Childress and hook up with Hendrick.

That was my first thought when I read about this yesterday. It seems like a no brainer, considering Johnson’s relationship with Hendrick. When you factor in Noah Gragson’s and Luke Lambert’s connection to Hendrick through JR Motorsports’ Hendrick alliance, I can’t imagine it won’t happen?

While Childress has picked up their program this year, a Hendrick alliance could be what Petty GMS needs to reach the next level. I just wonder how binding the Childress contract is?

Why would anybody buy into a NASCAR team? You’re just waiting to screwed (demolished) at the finish, or a big fine and suspension because someone didn’t tighten a lug nut.
There’s got to be some big secret the fans don’t know about and the media is not reporting.

gbvette
Reply to  Tom B

Apparently you know something about NASCAR that Hamblin, Michael Jordan, Maury Gallagher, Justin Marks, Pitbull, Keselowski, and Matt Kaulig, don’t. They were all foolish enough to start or buy Cup teams within the last year or two.

The only way he could get a ride was to buy into a team. The fact Mr. H isn’t involved says a lot. At least for now.