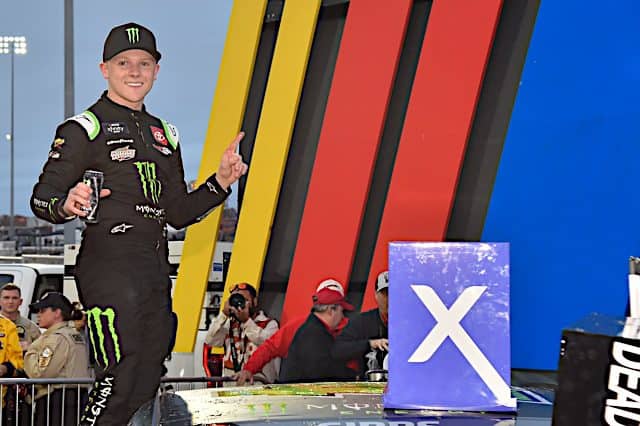 PHOENIX — “Have you guys talked to Little Jesús yet?” Noah Gragson asked a group of reporters walking by at NASCAR’s Championship 4 Media Day.

No further context was needed; everyone knew immediately Gragson was talking about his NASCAR Xfinity Series rival, Ty Gibbs. It’s been five days since Gibbs’ religious comments went viral, coming after his controversial Martinsville Speedway win that was followed by a chorus of boos and a “Thank you, Grandpa” chant.

“Jesus was hated first and among all the people,” Gibbs told SiriusXM NASCAR Radio. “That’s a part of it … silencing out the crowd.”

That one sentence quite possibly caused more of an uproar than Gibbs dumping his Joe Gibbs Racing teammate Brandon Jones.

It even led to a fan dressing up as Jesus Christ the next day at Martinsville, walking up and down the grid for the NASCAR Cup Series race in a mission to seek out Gibbs.

At Media Day, Camping World Truck Series driver Ben Rhodes had some fun with it, asking Gibbs if he walks “on water.”

Ben Rhodes jumps in to ask the hard question to Ty Gibbs pic.twitter.com/ve5ByErQbL

To his credit, Gibbs did apologize Thursday (Nov. 3) for bringing Jesus into it.

“I totally do [regret it], and I wasn’t trying to say it like that,” Gibbs told FOX Sports. “It came out the wrong way, of course. Moving forward, I should do the best I can to be more aware of my situation and know what’s going on.”

In that answer, Gibbs seemed genuine. I truly don’t think he really meant to compare himself to Jesus.

But the fact is, he said it, and it’s another instance of him using Jesus and his faith as an excuse to do whatever he wants.

The verse Gibbs was trying to reference was John 15:18, which says, “If the world hates you, understand it hated me first.”

The problem is Gibbs used this verse completely out of context. The verse before it says, “This is My command to you: Love one another.” Well, Jones sure as hell didn’t feel too loved by Gibbs when he was getting sent into the outside wall. In the way that Gibbs used it, it would be like if Jesus stole bread from one of his disciples, and then was like, “Yep, I knew people were gonna hate me,” when people got mad after.

Dale Earnhardt Jr. noted on his podcast Dale Jr. Download that he didn’t think Gibbs came up with the “people hated Jesus” comment on his own, but rather it was something he regurgitated that a mentor had told him recently.

Well, that mentor is not doing him any favors.

I may be a NASCAR reporter but I’m also a Christian, and I’m offended any time Gibbs slanders the name of Jesus as an excuse to keep driving dirty while acting like the victim. I’m not saying all this because I want to drag a brother in Christ down, but rather to help him get back on the right track.

When I or other Christians go to church, read the scriptures or spend time in prayer, we’re turning to God as a means of learning, reflecting and bettering myself. With Gibbs, I don’t see that. He seems to use Christianity to hide as well as to gain power for himself while not changing anything about his demeanor for the better. Unfortunately, there have been many throughout history who have used Christianity in the same manner, and the problem is it gives it a bad look and makes others super skeptical and critical of all Christians.

Should Gibbs give all the praise and glory to God in interviews? Absolutely. He should be doing that win or lose, which is what he did after he crashed out at Bristol Motor Speedway and lost the regular-season title.

But right now, it’s coming across as phony because actions speak louder than words, and his actions indicate he’s out to serve himself, not God. We’ve seen at least seven instances this season where Gibbs, the second he was wronged, almost went into a blind rage and immediately retaliated exponentially worse than the initial incident.

“Preach the gospel at all times, and when necessary, use words,” is the quote most commonly attributed to St. Francis and one I think about often. I think Gibbs also needs to think about that phrase the next time he has an altercation.

And look, Joe Gibbs is a great mentor to many and someone who genuinely seems sincere about his faith. But sometimes your own grandpa ain’t the one who you’re going to listen to the best.

I’d advise Ty Gibbs to turn to fellow drivers such as Michael McDowell, Aric Almirola or Chase Briscoe, as they’re all outspoken Christians who seem to be doing it right.

Good article. I agree with everything.

Kyle Petty and Steve Letarte said on shows this week, Rev. Joe made excuses saying they were “working on it”, etc. For how long? This is not the first incident with this weird little dude. Excuses excuses. Don’t think Gramps will fire him, ban him, punish him, so where is the incentive for his arrogant and entitled actions to change?

Something doesn’t seem quite right in his thick entitled skull (imo). Doubtful
things will change. He screws up, is never contrite or humble or sorry, the exact opposite. Weird stuff. The lack of self-awareness is troublesome. IMO

I love the poor drivers that have to race this idiot calling him “Jesus” and asking if he walks on water. Too funny.

Invoking the Lord in the manner he did, made my blood boil. I agree with Dale Jr. to a degree, it would not surprise if somebody was whispering that stuff in his ear.

I’m gonna hope Ty learns from his mistakes. He’s still young and has a lot of growing up to do. I still think Nascar should have suspended him, and he certainly deserves all the boos and criticism he’s received over the last week, but he doesn’t have the experience and the maturity of a veteran. One thing for sure… somebody needs to knock him down a few pegs.

You are going to be disappointed.

it’s just best to leave God and Jesus out of the discussion all together. I find it bit of a stretch to think God is concerned with the outcome of a race, and whether Ty is going to dump someone. Not a good look.

I’ve always doubted those who were too overt in any belief.
it’s simply a fact. Actions speak louder than words.

Ty, you sound like you put yourself on equal footing with Jesus. You be walking on very thin ice, little brother…

My picture: the Gibbs family sitting around at Thanksgiving and see Ricky Bobbie saying “dear Lord Baby Jesus….” The whole crowd, including big Joe, are equal to Jim Bakker.
Holden Caufield summed it up in The Catcher in the Rye, when he commented on the Mortician praying. Great dialogue.
Those of you who fall for Gibbs et all will fall for anything.

The only thing little gibbs needs is a ass whooping. And when he gets to cup next year he will get it if he drives the way he has been. Cant wait for him and logano to get into it. I can see it coming.

The kid has a mental problem, and the ones to blame for the way this kid has turned out is his family, they created this monster, he is ungodly spoiled and has major entitlement issues, He is a disgrace

Exactly! I read that Ty’s father was “disappointed” in what Ty did at Martinsville. Disappointed?? Really?? Yep well that shows a lot of the problem with this boy. And grandpappy Low Blow Joe said they plan to “walk Ty thru this”. Bingo! There is the other half of this boy’s problem. Walk him through it?
Well, I know no one expects any of this insanity from Ty Gibbs to stop. He will still be apologizing and claiming to learn from his mistakes for many years to come until…………………………………………something major occurs.

Nascar is FULL of spoiled rich kids. So what’s nee?

I think he should quote Flip Wilson:

lololol EXACTLY when you get down to it.

The holier than thou Gibbs team, from top to bottom, would stick a knife in your back any time. Look what they did to Kyle Busch so that little twirp could get a ride in cup. Disgraceful.

Two persons who always draw controversy when ever they are mentioned, no matter what the content or intent is: Jesus Christ and Adolf Hitler.