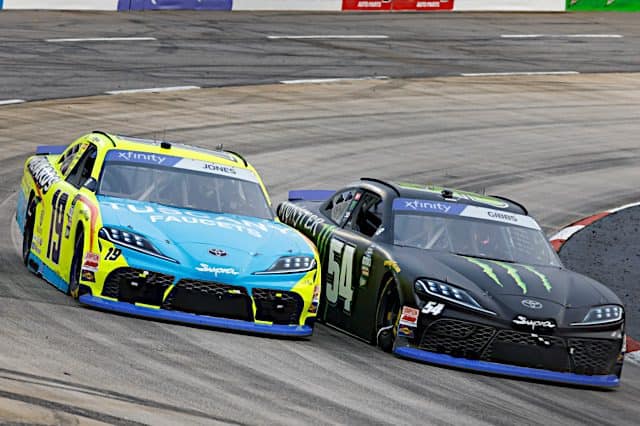 I’ve watched a lot of racing in the last two decades and seen many race-winning moves in my time, and what Ty Gibbs did on the final lap of Saturday’s (Oct. 29) Dead On Tools 250 was one of the most aggravating moves I’ve ever witnessed.

Brandon Jones and Gibbs raced hard, nothing wildly outside the normal Martinsville Speedway beating and banging — particularly for a playoff cutoff race. In the race’s closing stages, the restart advantage was clearly in favor of the driver lined up as the second car on the inside. Jones lined up directly behind Gibbs on the restart, with Noah Gragson lined up in the outside front row.

By the time the trio reached the middle of turns 1 and 2, Jones was on the inside of Gibbs, who was sandwiched between Jones and Gragson. I didn’t have a problem with this move and didn’t all race long. The trio traveled down the backstretch three-abreast. Gibbs ran Gragson a little high, got a run off turn 4 and was on Jones’ bumper by the start-finish line.

But the aggravating and unforgivable move came seconds later, after every move on the track had been defendable by every driver to this point.

Gibbs squared up the nose of his Joe Gibbs Racing Toyota with the back bumper of Jones’ JGR Toyota and sent the No. 19 into the turn 1 wall. The wreck was a clear sign that Gibbs had zero intentions of trying to pass Jones cleanly, buckling the nose of  the No. 54 car and leaving Jones against the wall with a pancaked left rear.

The most frustrating part of this situation was that Gibbs didn’t have to win. Gibbs scored enough points and enough cars had dropped out that a win wasn’t necessary for him to advance to the Championship 4. Jones needed to win to advance, so he had been aggressive with Gibbs on the final restart and those before.

Saturday wasn’t Gibbs’ first incident in 2022 of making questionable decisions. At Las Vegas Motor Speedway, on lap 3, he didn’t cut Ryan Sieg a break and essentially wrecked the No. 39 for no reason. If he had more patience, Gibbs would have passed Sieg without issue in a lap or two.

At Richmond Raceway, Gibbs tried his darndest to shove John Hunter Nemechek out of his way with two laps to go. Then, on the final lap, he was door-to-door with Nemechek. Gibbs made little effort to make the corner and pass cleanly. The old adage “eight tires are better than four” was tested successfully on JHN, who was in JGR’s No. 18.

Was combing through videos I took this weekend at Richmond and found this (sound on) 🔊@JHNemechek was frustrated with @TyGibbs_ after the race, but I didn't notice in the moment how JHN's engine can be heard revving way louder as he prepared to show his displeasure 👇#NASCAR pic.twitter.com/TUGzdrERDV

One week later, in the final overtime restart at Martinsville, Jones and Gibbs raced hard again and with some contact, but a clean final pass was made. Sam Mayer then forced himself between Landon Cassill and Gibbs, exiting turn 4 and forcing Gibbs up into the wall in an effort to win the Xfinity Dash 4 Cash bonus. Gibbs immediately retaliated by slamming his nose into Mayer’s rear multiple times on the cool-down lap.

Later, he confronted Mayer on pit road and shoved him before walking away as if that settled things. Mayer followed him, and after a few words and small pushes, Mayer shoved Gibbs back. Gibbs proceeded to punch him multiple times before the pair were broken up.

Then, during the NASCAR Cup Series race at Texas Motor Speedway, Gibbs used his car to deliver a message of frustration to Ty Dillon on pit road. The left turn into Dillon endangered Chris Buescher’s pit crew along with two NASCAR officials, leading NASCAR to fine Gibbs $75,000. He also rammed into the back of Erik Jones twice while under caution in that race.

After Ty Gibbs apologized for hitting Ty Dillon, Erik Jones tweeted a warning to the 19-year-old.

But the decision to blatantly wreck his teammate and follow it up with zero remorse has solidified Gibbs as NASCAR’s newest villain. He climbed out of the car and motioned his hands in a “bring it on” gesture as the fans booed at Martinsville. Later, they chanted “thank you, grandpa” as celebrations commenced on the frontstretch.

Fans chanting "Thank you, grandpa" to Ty Gibbs as he celebrates in victory lane. pic.twitter.com/bPGgePBGs8

In the post-race press conference, The Athletic’s Jordan Bianchi asked Gibbs if he felt bad for wrecking Jones.

“I definitely didn’t want to crash him,” Gibbs said, “But I wanted to move him, so that’s what happened.”

That’s a non-answer and one he had already used as an answer to other questions, along with how they were “racing for wins.” He also referenced how Jones moved him in the spring — but as you will recall, Gibbs wasn’t fenced by Jones.

As Jones stood in the post-race media bullpen, he looked over his shoulder toward Gibbs’ victory celebrations.

“Me and Ty have always been kinda friends but lost all respect today,” Jones said.

Josh Berry and Justin Allgaier spoke with Jones post-race on pit road. Berry said he told Jones that he deserved better and couldn’t believe what he saw.

“He’s [Jones] showing a lot more composure than I would be right now,” Gragson told Frontstretch. “[…] You kinda got to deal with that when you’re driving a Ty Gibbs Racing car — I mean, Joe Gibbs Racing.”

Gragson referred to JGR as Ty Gibbs Racing in his NBC post-race interview as well. Clearly an intentional mistake on his part.

The intentional wreck even warranted a response from Marcus Lemonis, CEO of Camping World.

I’m disappointed in you @TyGibbs .. signed a @NASCAR fan.

I just lost all respect for Ty Gibbs. I totally agree with @JeffBurton @SteveLetarte not good !

I’m not sure a driver has been less popular within NASCAR than Gibbs is at this moment. He walks into the sport with a natural target on his back because of who he is. Driving for your grandfather’s team is never easy when dealing with fans. Just ask Austin and Ty Dillon. But I’m not sure they ever struck a nerve with the fans harder than Gibbs is right now. The pair never gave fans a reason, or a laundry list of reasons, to be upset with them.

“When things like that [Gibbs wrecking Jones] happen, there’s going to be consequences,” Ty’s grandfather and team owner Joe Gibbs told SiriusXM NASCAR Radio after the race. “Ty knows that — we all do — and he’s going to have to work his way through all that.”

What are those consequences? Only in my wildest dreams do I see JGR opting not to promote Gibbs to a Cup ride as a punishment. So what’s the consequence? If there have been consequences for his previous actions, they haven’t persuaded Gibbs to straighten up and fly right.

Ironically, it’s almost a natural fit that Gibbs is destined to succeed Kyle Busch in the No. 18 JGR Toyota — even though it’s not official. Busch has received more boos from the crowd and complaints on social media than any other driver in the last decade.

Every time that Gibbs does something the fanbase deems unacceptable, the boos for him grow louder. On top of that, Gibbs mimicked Busch’s celebration when he climbed out of the car to celebrate on Saturday with his “bring it on” gesture.

If, for some magical reason, that Martinsville was Gibbs’ “coming to Jesus” moment (pun intended, given his later comments), it’s too late. When his name is announced at driver introductions, he will be booed. Nothing I have watched on television or witnessed in person in 2022 leads me to believe that there is another driver that carries the Public Enemy No. 1 title more than him.

Hearing apologies from the same person for repeated mistakes gets old and eventually goes in one ear and flies out the other even faster. While Gibbs would still have to pay for the consequences of wrecking Jones, I wouldn’t be declaring him NASCAR’s newest villain had the first thing that came out of his mouth been an apology to Jones.

But it wasn’t. He didn’t apologize. He never did. He was racing for a win, but he has learned that doing everything possible to win has a line in the sand. On Saturday night, he jumped that line considerably.

Ty Gibbs is a very unlikable, entitled and clueless individual. He seems to think he is stealing and rocking KB’s signature arm gestures egging on the hate. I got news for him he looks as stupid as the other entitled Pawpaw brat who thought it was cool to run, slide in the grass and do “grass” angels. LOL.

Ty is not a villain. Villains typically have some charming characteristics even though they are the “bad guys”. Ty is just a grade A arrogant, entitled A**hole.

And NASCAR is enabling him. Figures. You can learn a lot about a guy by looking at his friends.

Last edited 3 months ago by Jeremy
5
0

ty gibbs aka Silver Spoon is a pompous piece of crap. I can’t wait to see him get taken out at Phoenix. I would love to meet him face to face.

Gibbs is shockingly immature and will have a rough ride in the Cup Series until (unless) he grows up.

For him to have a rough ride, someone will have to hold him responsible. He is clearly the golden child and is protected by NASCAR, so which one of the plebeians is going to give up their NASCAR ride to stuff him in the wall?

There is zero evidence he is ‘protected by NASCAR’. The veterans will race him like they raced Logano in his early years, with no respect and no breaks.

A week after Bubba is suspended for purposely wrecking a championship competitor, he intentionally stuffs a championship competitor in the wall (supposedly after claiming he was going to do just that over the radio), yet NASCAR looks the other way and pretends it didn’t happen. Sounds like NASCAR playing favorites aka “protecting” him to me. Rules for Thee, but not for me!

Last edited 3 months ago by Jeremy
3
0

It wasn’t supposedly. You could hear him say that on the TV broadcast the caution before.

I didn’t personally hear it, but read somewhere else it was claimed he announced intent to wreck Jones. Thank you for confirming he actually verbalized on the broadcast his pre-meditated intent that NASCAR is conveniently ignoring.

Tom B
Reply to  Jeremy

It should be Brandon Jones. JGR should park Brandon as preventive maintenance.

We are hoping grampa does what NASCAR should have done on the spot. Park him!

I have stated this to my girlfriend many times. Ty hasn’t hit the wall hard enough to scare himself or to realize he might seriously hurt someone. When that time does happen and it will, I think that is when he will really “learn” from his mistakes.

It’s time for Kevin Harvick to grab him and toss the little tyke into the crowd. That should solve the problem. By the time security gets there, old Ty will be a changed brat.

It won’t be Kevin. It will be Delana.