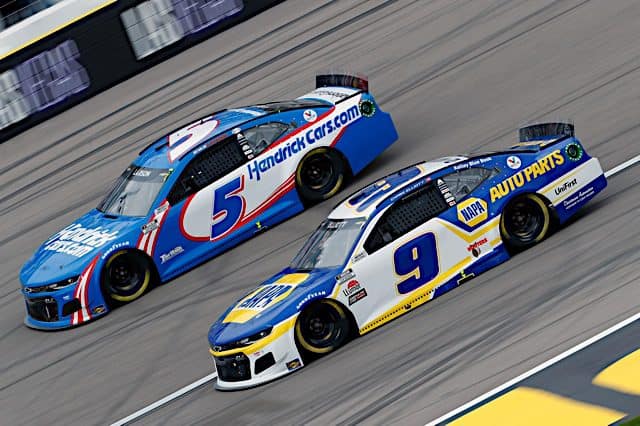 When the dust settled after an electrifying finish at Martinsville Speedway, Chase Elliott was almost an afterthought. For NASCAR’s most popular driver, that must have felt unusual. But it was hard not to marvel at Christopher Bell’s second clutch win of the playoffs, a victory that locked him into the championship race. Even more astounding was Ross Chastain riding the wall through turns 3 and 4 on the final lap, picking up just enough points to qualify for the championship race. With Joey Logano already in the final round of the playoffs, Elliott became the fourth and final driver to clinch a title race spot at Martinsville.

Thanks to the positions that Chastain picked up with his last lap banzai move, he earned enough points to outscore Elliott in the third round of the playoffs. That doesn’t matter for the driver’s championship since Chastain and Elliott both got to advance. However, Elliott’s No. 9 team does not advance in the playoffs for the owner’s championship. The story of why that scenario exists hinges on several unintended consequences of an unpredictable playoff race.

If Blaney or the No. 45 car, now driven by Busch’s teammate Bubba Wallace, had exited the playoffs simultaneously, the difference in the driver’s and owner’s championships would have been a non-story. But things got weird during the second round. First, at Texas Motor Speedway, there was the incident where William Byron spun Denny Hamlin under caution. NASCAR allegedly missed the spin and did not punish Byron mid-race. Instead, the sanctioning body fined and penalized Byron 25 points a few days later. Hendrick Motorsports appealed the penalty the following week and got all the points restored to Byron’s team.

Then, in the last race of the second round at the Charlotte Motor Speedway ROVAL, Larson hit the wall and damaged his car. Unable to recover in the closing laps, he was eliminated from the playoffs by two points. However, the No. 45 car scored fewer points than Larson’s No. 5 in the second round. As a result, Larson’s car advanced in the owner’s points even though the driver did not. Two weeks later, when Larson won at Homestead-Miami Speedway, it locked the No. 5 car into the final round of the owner’s playoffs.

In the aftermath of Larson’s Homestead victory, Hendrick Motorsports’ appeal of Byron’s penalty appeared to have backfired. If the appeals panel had not returned Byron’s 25 points, he would have been eliminated from the postseason at the ROVAL instead of Larson. Larson would have then locked himself into the championship round of the playoffs with his win.

Of course, that’s hindsight talking. Rick Hendrick and his team had no idea how the points would play out and were well within their rights to appeal Byron’s penalty. Additionally, Byron won the Cup Series race earlier this year at Martinsville and figured to have a strong chance to reach the championship race himself. There was a good possibility that both Elliott and Byron could have left Martinsville still in the championship hunt, giving HMS two drivers and three cars in the championship round.

Yet Sunday’s race at Martinsville just wasn’t Byron’s day. Due to starting deep in the field, the No. 24 car did not get a single stage point. Byron also got stuck a lap down during the second stage and spent the second half of the race trying to recover track position. With Hamlin, Bell and Elliott all running at the front of the pack, Byron never had a chance to make up the points he lost during the stages.

However, in a strange twist, the appeal of Byron’s penalty actually looks better now because it effectively saved Elliott’s championship hopes. If the penalty had stood and Larson had remained in the playoffs, he would have taken up a spot in the championship race with his Homestead win. Then, Bell’s Martinsville win would have made Chastain the only driver to advance to the championship race on points. Chastain’s jaw-dropping last lap surge would have eliminated Elliott had Larson still been in the game.

See also
4 Burning Questions: Was Kyle Larson's Homestead Win a Sign of Things to Come for 2023?

So with one race to go, HMS is in an awkward situation. If Larson beats Logano, Bell, and Chastain at Phoenix Raceway this weekend, the No. 5 car wins the owner’s championship although Larson himself is no longer able to compete for the driver’s title. Elliott can still win the driver’s title as a Hendrick driver, but the No. 9 car is out of the running for the owner’s championship. Winning both championships would require both Larson and Elliott to defeat the other three title contenders and their teams.

That may not be a bad arrangement when you consider the friction between Larson and Elliott this year. While Hendrick Motorsports is normally great at promoting a unified front, both of Larson’s regular season wins came at the expense of some close contact racing with Elliott. It often looked like Larson and Elliott might be each other’s biggest competition for the title. But now, with each driver effectively racing for a share of the championship that the other can’t win, that problem has resolved itself.

It is only fitting that in a year of surprises, the 2022 championship race will feature five teams with title hopes instead of the usual four. Elliott and Larson may be fierce competitors and the most recent Cup Series champions, but they will have to work together at Phoenix for Hendrick to capture the driver’s and owner’s crowns for the third straight year.

No Worries, Ford’s Roush Racing has been fined enough this year to cover the hendricknascar chevrolet/toyota banquet.

Interesting. I didn’t realize about the championship races. Not a fan of either driver though.

I don’t believe for a second CE is the MOST POPULAR NASCAR driver. By what metric, the robo calls yearly for the “MOST POPULAR” call in vote? He has the personality of a dead house plant. They said that about the token female driver too, a few years ago.