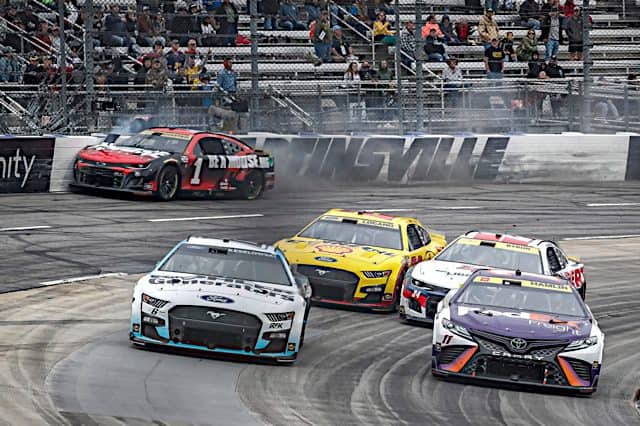 Ross Chastain pulled off one of the most incredible moves in NASCAR history to make the Championship 4… but is it a move that should be allowed going forward?

When the field took the white flag, Chastain trailed Denny Hamlin by two points for the final Championship 4 spot. Hamlin was fifth on the racetrack and Chastain was 10th.

But going into turn 3, Chastain put his No. 1 Chevrolet against the outside wall and stayed in the throttle, riding the wall all the way around the corner and to the finish line. In the process, Chastain passed five cars on the outside, nosing ahead of Hamlin for fifth. Brad Keselowski was disqualified after post-race inspection, so they have since been credited with fourth and fifth.

UNBELIEVABLE!@RossChastain floors it along the wall to go from 10th to 5th and advance to the CHAMPIONSHIP! #NASCARPlayoffs pic.twitter.com/9qX3eq7T6h

The move put Chastain in and Hamlin out of the championship fight.

“I thought, ‘Why not?'” Chastain said. “That’s a motto that some buddies and I have back home. We live by ‘why not?’ To apply that to the Cup Series in this scenario, there are rules. There are a lot of rules out here.

“I didn’t know how it would all work out. I didn’t know if the physics would work to make it around the corner, but it did. I’m sure glad it did.”

Driving into the final corner without lifting has come to be known as the video game move by many in the NASCAR community. Chastain echoed that by noting he first used the move in NASCAR 2005 on the GameCube with his brother Chad Chastain.

“I mean, I did that when I was eight years old,” Chastain said. “I grabbed fifth gear, asked off of [turn] 2 on the last lap if we needed it, and we did. I couldn’t tell who was leading. I made the choice, grabbed fifth gear down the back. Full committed. Basically let go of the wheel, hoping I didn’t catch the turn four access gate or something crazy. But I was willing to do it.”

The move worked out for Chastain, and it may end up being the move that catapults him to a championship. But Chastain’s move may open a Pandora’s box going forward. And it’s already brought about split views amongst many in the garage.

“As spectacular as it was, as much as it worked, the problem is now the box is open, right?” Joey Logano said. “Now every Xfinity race, every Truck race, every Cup race, no matter the track, this wall riding is going to be a play. That’s not good. There needs to be a rule against this one because I don’t know if you want the whole field riding the wall coming to the checkered flag.

“I don’t know if it’s the safest thing for the driver or the fans when you have a car right up at the wall hauling the mail like that. What if that fence, gate, wasn’t closed all the way? What if it was bent and caught his car? That’s a big risk that Ross was willing to take. God bless him, that’s awesome.

“I don’t think we need to do that every week.”

Logano suggested that if you gain a position while hitting the wall then you should be sent to the rear of the field.

“I don’t think it makes us look very good,” Blaney said. “It just makes us look like — I don’t know. What keeps anybody from doing that from now on anywhere? If you can make up two seconds, I guess everyone’s just going to start doing that.

“I don’t think it’s very good for the sport, but he did it, it got him into the Championship 4, it’s good for him. But yeah, I don’t think that needs to be a reoccurring thing.”

“That’s one of those moves that was pretty incredible and worked well, but we probably have to stop it from happening on a regular basis,” Gordon said.

Hamlin’s crew chief Chris Gabehart was in the camp that didn’t have a problem with the move, even though it ultimately knocked his team out of the playoffs.

“No rule or no sporting issue with that,” Gabehart said. “It’s a tool in the kit.”

Last year’s NASCAR Cup Series champion Kyle Larson was the most critical of Chastain’s move. Ironically, Larson had the most notable instance of trying the video game move, using it to try to get around Hamlin to win the 2021 Southern 500. Larson now regrets doing that move.

Gabehart was skeptical of Larson’s harsh stance on it.

“That’s an interesting tactic,” Gabehart said. “I have so much respect for Kyle Larson. For him to say that causes me pause. I can’t help but think had he won the Southern 500 he wouldn’t necessarily say that. I don’t fault Ross for doing what he did at all. So I think it’s interesting Larson said that. I’ll have to rethink that.”

Hamlin didn’t have a huge problem with it either. He was obviously disappointed at missing out on the Championship 4 but chalked it more up to poor pit stops at the end of the race leaving him vulnerable to the move.

“Everyone’s got the same four walls to try to race in. Sometimes, you can cut the course and find a shortcut. He did today.”

Chase Briscoe was one of those who Chastain passed in the move. He entered the race in a must-win situation in order to advance to the Championship 4 and stayed out late to try to win, ultimately finishing 10th. Having known Chastain’s move worked, he wishes he had tried it to advance.

“Now that we all know it’s that big of an advantage, if you’re second or third even, you’re gonna do that because you’re going to win the race,” Briscoe said. “I’m curious to see what plays out after that.

“I wish I would’ve done it now, looking back on it.”

Briscoe noted that other than Martinsville, the move could probably also be pulled off at Richmond Raceway and the L.A. Coliseum.

“I don’t think they’re going to penalize him, but maybe that’s something to look at going into next year with the rule book…” Briscoe said. “But kudos to him for doing it. We could’ve all done it but just didn’t do it.”

It was a BRILLIANT move by Chastain! The look on Dinny’s face was priceless!

The only reason it worked was because the cars ahead didn’t go to the wall coming out of turn four and gave him a path to the finish line.

It doesn’t come close to Richie Evans driving along the frontstretch fence to win at Martinsville. Check this:

I was there. It was spectacular. Not sure how to police it — until a car or drive components impel someone in the stands and the massive lawsuits cripple the sport. Promoters will not have an opportunity to get liability insurance,
Also, don’t want a driver hurt as well. But it was fun to watch

Every week there seems to be somebody who is butt hurt. Stop crying. It’s called racing to win. He did what he had to do to win. At least he had the integrity not to spin another driver. Awesome job.