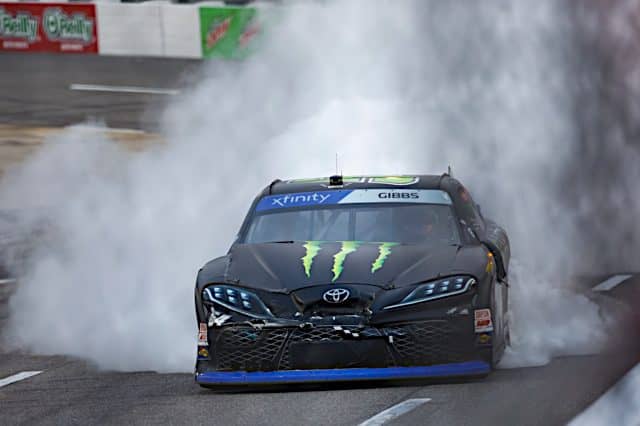 Gibbs, who locked himself into the Championship 4 on points during the race, exited from his car to a showering of boos from the fans. Gibbs’ contact with Jones sent the No. 19 Toyota hard into the outside wall, where it sat in turn 1 as the race ended under the caution flag.

“I definitely didn’t want to wreck him but I wanted to get him out of the groove,” Gibbs said after the race. “I felt like we lost several spots earlier in the spring race the same way.”

That’s certainly not how Jones saw it, as the incident made the difference in him getting into the Championship 4.

“Really no need for it,” Jones said. “I get you want to win the race, you want to go for it. I want to race against the best, I want to try to beat the best out here, but man, you got to give me an opportunity and a chance. That’s not really having a chance to go race for the win. At least we could’ve been side-by-side or something. Second place, last place, didn’t matter for us today, we had to win the race.

“That part of it is what it is, but I would have liked to at least have a chance to race against him and tried to hold him off. That’s what’s fun is, going door-to-door racing and doing that, not just wrecking somebody. I ran behind Noah [Gragson] this year at Bristol [Motor Speedway], everyone was mad at me for not wrecking Noah there, but it was more of a respect thing and I wanted to get to his left rear and give him a chance to win the race. I got more satisfaction out of that than doing something like that.”

With Jones eliminated, Gibbs will race for the championship at Phoenix Raceway against the JR Motorsports drivers of Noah Gragson, Justin Allgaier and Josh Berry.

In the race itself, Sheldon Creed tied a career-best Xfinity finish in second, while Riley Herbst, Gragson and Allgaier completed the top five.

It was another typical Martinsville affair with contact and short track spins littering the event. Early in stage one, Patrick Emerling and Joe Graf Jr. spun and crashed in turn 2, with both cars suffering damage. Graf’s No. 07 had rear-end problems the rest of the race while Emerling’s nose was crunched up. Just as the caution came out for this incident, Kris Wright also got in the wall after some contact from another car.

With about three laps to go in stage one, Bayley Currey appeared to cut a tire and hit the wall hard. The caution didn’t come out, though, and he went to the garage with a damaged right front suspension.

Jones went on to win the stage. However, he didn’t restart out front, as Gragson had pitted earlier and assumed the top spot on lap 71.

Gibbs got by Gragson about 20 laps before the next caution came out for Landon Cassill. On lap 106, the No. 10 wheel hopped in turn 3 and hit the wall in a similar spot as Currey.

Cassill added that he’s “still not over this one, I had this race circled.”

I caught up with a disappointed @landoncassill after a wheel hop took him out of the race.

He said he had this race circled. #NASCAR pic.twitter.com/uDukkmztOe

As the old saying goes, cautions breed cautions, as there were one after another in the closing laps of the final stage. One of the cautions involved a playoff driver in Hill. Jeremy Clements got loose while racing underneath Hill on lap 213, which got both cars sideways. Stefan Parsons also got some damage as he tried to get by the pair out of turn 2.

Soon after the next restart, with about 32 laps left, the track became a parking lot in turn 3. Myatt Snider and Mason Massey got turned around in front of several cars, causing a traffic jam. Rajah Caruth, Hill and several others were caught up in it.

Shortly after the ensuing restart, Allmendinger cut a tire while racing Allgaier with 16 laps to go, effectively ending his chances to make the Championship 4.

Kyle Weatherman and Brandon Brown got turned on lap 243, bringing out yet another caution. Both drivers were able to return to the track with minimal damage.

Then, all three JGR cars — Gibbs on the bottom, Jones in the middle and Sammy Smith on the top — fought for the lead on the restart with two to go. Smith got spun out of turn 4 and the caution came out just before the white flag.

Based on the last scoring loop, Jones was ruled as the leader by NASCAR, leading to more confusion heading to a restart.

Overtime continued, as Josh Berry got turned around off the nose of Daniel Hemric and in front of Allgaier. Both Hemric and Allgaier received damage from the contact.

On yet another restart, Jones took the lead with a push from Sheldon Creed. Gibbs then bumped the No. 19 in turn 1 of the final lap, causing Jones to spin while Gibbs sailed by for the victory.

Gibbs and Jones weren’t the only fireworks after the race, as Myatt Snider and Hill were involved in a post-race scuffle.

Battles on the track, battles off the track.

Myatt Snider and Austin Hill get into it post-race. pic.twitter.com/eMKTCbxcTT

Just one race remains in the 2022 NXS season, the championship finale at Phoenix Raceway. Xfinity drivers will compete on Saturday, Nov. 5 at 6 p.m. ET with TV coverage provided by USA Network.

I have mixed feelings about the finish. I expect drivers to be as aggressive as necessary, but there was no need for Gibbs to punt Jones with the #54 already in the final round. I hope Karma starts right behind Ty Gibbs next Sunday.

Gibbs was going to keep banging Jones out of the way no matter how many restarts there were. Somebody needs to punch that little twerp in the nose.

One would think having two JGR entries next week would have been the preferred outcome, however it’s obvious that “Little Gibbs” is a bit selfish.

While I agree that it was quite stupid to knock your teammate out of the race, and the playoffs, at the same time I was glad to see that JGR let them race. It just sucks that grandpa’s little boy couldn’t race Jones cleanly. It would have been easy for the team to put “team orders” in place, and tell Gibbs to race but not pass him, but from what they said on the broadcast, with 10 to go they were told they could “race”. And even though everyone watching the race knew what Gibbs was going to do, I don’t think anyone at Gibbs expected it.

Does anyone know if Menards is following Jones to JRM? If anyone has a right to be pissed, it has to be Menards. The car they sponsor had a chance to race for the championship, and the team owner that they write their big sponsorship checks to, allowed his grandson, and teammate, to end Menards chance at the playoffs. I know if I was Menards, I’d be pretty irate, and would be packing up my backing, and heading for the door.

You can bet if the roles were reversed Jones would have been told to back down. 100% guaranteed!

I can picture Noah punting Little Gibbs in the last corner to win the event and Little Gibbs crying to Grandpa saying “He can’t do that to me!”

The last 30 laps were a mess. Never mind B. Jones, I’m more disappointed Allmendinger didn’t advance. He had a great year and has been the most consistent driver all season.

Easily one of the top 4 this year

NASCAR should park Ty Gibbs for the finale. Intentionally wrecking a driver because you have anger issues. Similar to Bubba’s deal but wrecking a teammate while you are already locked into the championship race is something that needs to be punished. IMO.

Bill B
Reply to  Jeff Inman

Should be just for purposely wrecking a driver that still was racing for a playoff berth. If I have one wish for next weeks race it’s that someone punts that little prick right out of the race. He doesn’t deserve to be champion.

JGR should park Brandon Jones at Phoenix. Why take a chance of retaliation in the Championship Race. JRM should get out the #88 car for Brandon Jones and let Karma happen. Boys have at it!

Jeremy
Reply to  Tom B

If I were Brandon Jones, I’d make damn sure there were 2 completely totaled joe gibbs cars next race (one being ty, the other being the one I’m in) to inflict maximum damage and cost on my way out to make a point. But then, Brandon Jones is probably not as petty and vindictive as I am.

Last edited 3 months ago by Jeremy
0
0

If I had the money, I’d put a bounty out. Any driver that punts BabyGibbs into the wall at Phoenix receives a full one year primary sponsorship!

Unfortunately, I don’t have pockets that deep. Think we could do a gofundme for this? lol

Jimmy Spencer needs to have a “talk” with Little Gibbs!