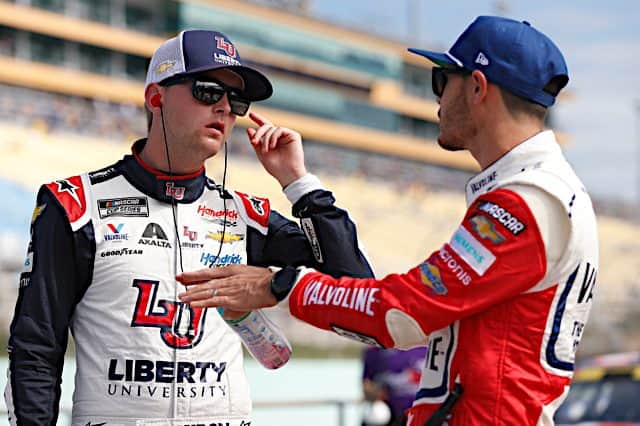 William Byron punted Denny Hamlin under caution during the NASCAR Cup Series race at Texas Motor Speedway. The TV broadcast reporter asked the Hendrick Motorsports driver his intention, to which he flat out admitted to doing it on purpose. Byron was fined and docked points because there was no question on if he did it on purpose. Hendrick Motorsports appealed that penalty, and the National Appeals Board overturned it, instead increasing the monetary fine. The end result was Byron advancing to the playoff Round of 8 while Kyle Larson, the defending series champion, was eliminated from the playoffs by two points.

After the run Larson had this past weekend, Hendrick Motorsports just might be looking into appealing their appeal.

The victory at Homestead-Miami Speedway would have locked Larson into the Championship 4 and given him a shot at being the first repeat champion since Jimmie Johnson won five in a row from 2006-2010. Meanwhile, Byron is currently sitting in the fourth spot in the Round of 8 just five points ahead of Hamlin, who is notoriously good at Martinsville Speedway. HMS might be better served asking for the appeals board to reconsider their decision.

See also
Thinkin' Out Loud at Homestead: Welcome Back Championship-Form Kyle Larson, You're a Little Late

Never, in the history of NASCAR, has someone been granted an appeal of a penalty handed down by the governing body and so quickly regretted the decision. While the regret is real, the reality is that HMS has made their bed, and they have to live with it.

Unintended consequences have run rampant in the Cup Series this season. For example, let’s start with the Daytona 500. Justin Haley loses a wheel, and the series is forced to enforce a regulation that was designed as a deterrent to teams who were skirting the rules by only tightening three of five lug nuts to exit pit road in a shorter period of time. This year, the single lug nut has resulted in more loose wheels. Thoughts and prayers to everyone who has paid a price for a minor mistake and a poor design.

Don’t forget Cole Custer slowing down for a supposed flat tire on the last lap of the Charlotte Motor Speedway ROVAL. NASCAR pinched him hard for attempting to influence the outcome of a race. Every lap that everyone turns during the season is attempting to influence the outcome of a given race. At Bristol Motor Speedway in 2021, Chase Elliott got on his radio and asked where Larson was, wanting to help him. Apparently, that was a different scenario because his crew chief or owner didn’t suggest it.

The next two weekends are going to be fun to watch for the ramifications of the Byron appeal. Should Byron not make it past Martinsville, there will certainly be questions about why HMS appealed the infraction. If he does and makes it to Phoenix Raceway and Larson ends up winning the race, it will still be a huge question mark as to whether they should have appealed or just accepted a penalty when Byron admitted he dumped Hamlin. On the plus side, Mr. H could win the owner’s title and driver’s title with two different young men.

As Monday Morning quarterbacks go you are mediocre at best. You should have predicted Larson was going to take himself out at Charlotte. There is no scenario where sitting on your hands and allowing a driver to be eliminated via penalty is a good decision unless the team has clairvoyant powers.

Mike:
Good observation. IT took a week or two for this to show itself. Laws of unintended consequences were topics in many decision-cases we discussed in Graduate School and measured evaluation must take place.
Here is another perspective, Byron can secure Fortune 500 sponsorship, Larson, right or wrong, has a scarlet letter on his chest and is being sponsored out of the owner’s pocket. We all know the incident but major companies cannot run the risk (another group of Grad School case studies) of backlash from the progressive, cancel culture.
So, if Byron does prevail, it was a good decision. Hendrick’s marketing group has more to work with in Byron’s case than in Larson’s. Rick, below, this is why Mike’s measured approach is spot on.

Bill B
Reply to  Charlie

There are so many unintended consequences of the playoffs that it seems pointless to pick one as mattering so much. One flat tire, one bad pit stop, one scrape of the wall, yada, yada, yada.
From a strictly mathematical point of view, the odds are better if you have 3 cars with a good chance to make it into the final 8 than just 2. By Byron getting those points back there were 3 HMS cars with a good chance of making it into the final 8. By not appealing and getting those 25 points back, Byron pretty much needs a win to advance. Geez, Larson hitting the wall is, in itself, and unintended consequence. Had he not hit the wall, all 3 HMS cars are in the final 8.
I just don’t get the logic in saying HMS would have been better off by letting one of their ships sink.

To be fair, at the moment in time Hendrick was evaluating the situation, he is trying to get 3 drivers into the Championship 4. Of the two, who would have thought Larson would be the one needing help to make the next cut? And 2 points… it nearly paid off. It would have if Bubba hadn’t come unhinged.