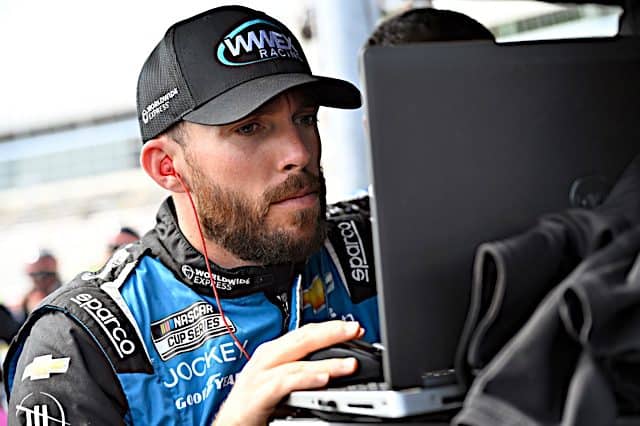 Within the next week, the NASCAR Cup Series will have its four championship contenders decided. After Kyle Larson’s victory at Homestead-Miami Speedway, Joey Logano remains the only playoff driver locked into the championship round. The driver in the next best shape, at 19 points above the cut line, is Ross Chastain.

At this point in the season, it may not be surprising to see Chastain still in title contention. He and Trackhouse Racing Team have been the biggest breakout stars of 2022. Sure, many people from Chastain’s old crew at Chip Ganassi Racing a year ago joined him at Trackhouse, but Chastain himself was unproven at the Cup level. There was no guarantee back in February that he would win any races or even make the playoffs.

Eight months of racing later, the goal for this season is much higher. With two races left, Chastain has two victories (the first of his career), 13 top fives (the most of all Cup Series drivers this season) and 19 top 10s (tied for the most in the Cup Series). He spent most of the regular season in the top five in overall points, climbing as high as second. Chastain and the No. 1 team have shown real championship potential all season long.

Even a lackluster end to the regular season seems like a distant memory after the first two races in the Round of 8. At Las Vegas, Chastain picked up where he left off in March, leading a race-high 68 laps and cruising to a second-place finish. He might have won had Logano not come charging through the field on fresher tires in the closing laps. Regardless, the No. 1 team kicked off the Round of 8 better than most of their competitors.

Homestead ended with the same result, but it was a much tougher battle for the No. 1 team. Starting mid-pack, Chastain had to claw his way forward as he and crew chief Phil Surgen fought to get the right balance on their Chevy. The real turning point was when Ryan Blaney spun on lap 211, just a few laps after Chastain had made a pit stop. Because Chastain had been able to hold his position on the lead lap, he cycled to the front of the field after the rest of the leaders pitted under caution.

From there on out, Chastain held his spot near the front. He escaped pit road cleanly after a scary incident during the last yellow flag stops when Larson spun leader Martin Truex Jr. into his pit box. When the race resumed with 17 laps to go, Chastain briefly had a shot to pass Larson but lost ground holding off a late charge from AJ Allmendinger. The No. 1 team had to settle for second again.

If Chastain qualifies for the championship round, the timing of the caution for Blaney’s spin could be a major reason why. In addition to dashing Blaney’s hopes for a strong finish, it also trapped William Byron, who was faster than Chastain for most of the race, a lap down. Chase Elliott ran in the top 10 for much of the afternoon, but he also got trapped a lap down by the caution and never fully recovered. Of the eight remaining playoff drivers, Chastain and Denny Hamlin were the only two to finish in the top 10. Had the race gone green to the finish, it is almost certain that the final top 10 would look much different and that Chastain would have less breathing room over the cut line.

However, none of the above means that Chastain is completely out of the woods. Next up is a trip to Martinsville Speedway, the last race of the Round of 8. Chastain earned a fifth-place finish there in the spring, so it’s not like the track in of itself presents a major problem for him. What could be a huge issue for the No. 1 is the looming specter of retaliation. It’s been a story all season long: As Chastain has raced at the front of the pack more often, his aggressive driving has ticked off several of his competitors. If any of them were to seek payback against Chastain for an incident earlier in the year, Martinsville would be the most likely place for it to happen.

Hamlin in particular has been vocal about being fed up with Chastain. The biggest confrontation between them occurred earlier this year at World Wide Technology Raceway at Gateway where Chastain wrecked Hamlin early in the race. The crash stemmed from a reckless, though apparently accidental, move by Chastain that enraged Hamlin, who spent the remainder of the event being a nuisance to Chastain every time they were near each other on track. Chastain also drew the ire of Elliott in the same race for his role in causing a multi-car crash that collected Elliott’s No. 9.

Hamlin and Elliott, first and foremost, have their own championship hopes to worry about in Martinsville. Elliott is currently 11 points above the cut line and Hamlin is five below. It would be foolish for either driver to seek revenge against Chastain in a way that ruins their own advancement to the championship race. Some might also argue that Hamlin got his payback on Chastain already at Pocono Raceway a few months ago. Yet Hamlin, who had a separate altercation with Byron in the round of 12, has dropped vague hints that he has a few scores yet to settle before this season ends. Those could certainly be empty threats. Or maybe not.

If you had told Chastain and his team back in February that they would be in this position with two races to go, they would have likely been ecstatic. But even if the No. 1 team has greatly exceeded expectations in 2022, their season is going to end on a low note if they don’t make it to the championship race. It will especially hurt if Chastain’s title hopes come crashing to an end off the front bumper of the No. 11 or the No. 9. Even those second-place finishes at Las Vegas and Homestead, results that have been so crucial to keeping Chastain in title contention, will feel hollow if Martinsville ends with torn up cars and hurt feelings.

With greater performance comes greater expectations, greater risk and greater rewards. Chastain still has a shot at the biggest reward of them all, but he will need to stay in the game through 500 laps at Martinsville with more than a few drivers who hold some lingering ill will toward him. Can the No. 1 team meet its new, lofty expectations one more time? For Chastain, the moment of truth in his 2022 season is here.

We’ll see if Hamlin is suspended if somehow he runs into Ross at Phoenix.